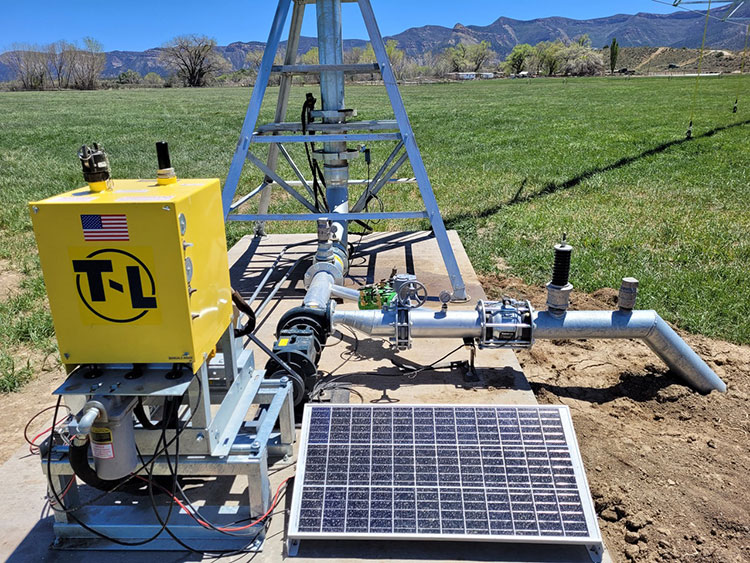 Cost is forever increasing on all inputs, which is why Yampa, Colo., rancher, Tyler Snyder, is quite pleased with his decision to upgrade his flood-irrigated hay fields with six hydro-powered T-L Irrigation pivots.

An in-pipe turbine generates all power needed on site at no cost beyond initial installation — which qualified for NRCS EQIP cost-share programs. Additionally, water passing through the turbine in pressurized pipes is protected from evaporation and seep loss. Nearly every drop of purchased water makes it to the field where it’s evenly distributed with the steady forward movement of T-L pivot hydrostatic drives. Snyder says yields have increased, water goes further, and significant power costs have been avoided.

“I’m able to use the same amount of water I did with flood irrigation, but I can spread it over more acres. Instead of flooding one field, I’m able to water several and continue to water fields I would normally have diverted water away from later in the season to target top-yielding fields. Water costs here are five-times the 2010 rate, so efficiency is valuable,” Snyder says.

He notes the cost of power—either electric or diesel to run a generator—are also ever increasing. “It would probably cost us $15,000 in power to run an electric pivot for 25-30 days. Our energy cost is zero with T-L pivots and turbines. We pay for water and minimal maintenance.”

Ed Brannan, owner of Maybell, Colo., B&B Irrigation, wishes he could install turbines to power his own pivots. Unfortunately, specific conditions are necessary for turbines to be an option. Neal Schlautman, T-L Irrigation Co. engineering manager, explains pressure generated by an elevated water source is the system driver.

On a typical excess pressure installation, water first runs through the turbine generating power used to turn the hydraulic pump which then moves the pivot. The water continues on to run through the pivot and irrigate the crop. A minimum of 65 PSI of water pressure with a minimum of 300 gallons per minute of water flow is needed at the pivot point to be split between the turbine and pivot for ideal operation. It takes 2.31 feet of head (drop in elevation) to generate 1 PSI, so a minimum of 150 feet of head is necessary. Snyder has 380 feet of head from his water source to his bottom pivot. The first, highest pivot on the line runs at 95 PSI, the lowest runs at 160 psi.

His system required installing two miles of pipe. “It took a little extra to get the fall we needed. In some places we could have ditched a bit closer for flood or a generator-powered pivot. We’re way off grid, so electricity wouldn’t have been an option,” Snyder says. “There was upfront investment, but in the long run, it’s the best option for us.”

Brannan encourages customers looking to upgrade to pivots to consider turbines, especially with the availability of EQIP funds for the projects but cautions not to count on it being an option. Without sufficient pressure, there are some workarounds, but they have their down sides.

“You can run more water through the system to get the power needed for the turbine and then dump the surplus. This only works if a producer has excess water and a place to use discharged water. It also can mean having to install a larger, more expensive pipe,” he says.

Where hydropower is an option, it pairs nicely with T-L pivots. Schlautman explains when paired with a T-L pivot, the producer simply turns on the valve at the pivot main line, water starts moving through the turbine generating power, and the T-L hydraulic pump starts turning to create hydraulic power and pressure. Using T-L exclusive 80% efficient planetary gears minimizes power requirements as compared to the 40% efficient worm gears of an electric drive pivot.

“Turbines operate best with steady, constant demand for speed and water flow—making them a perfect match for the steady forward movement of hydrostatically powered T-L pivots. The start-and-stop of electric pivots requires regulating the turbine with special valves to keep the electric generator consistently at 1,800 rpm for 60 Hz power. A hydrostatic T-L system can handle variations of 1,500 to 2,200 rpms without issue.”

Schlautman has worked with customers powering up to 9 tower T-L pivots with turbines. It’s a great option for those who have enough pressure in their systems, he says. Colorado State University reports 7% of Colorado’s irrigated farmland—170,000 acres—has sufficient pressure to utilize hydropower turbines. For those producers, T-L Irrigation Co. dealers and engineers are ready to help move irrigation off grid and take the power bill offline.