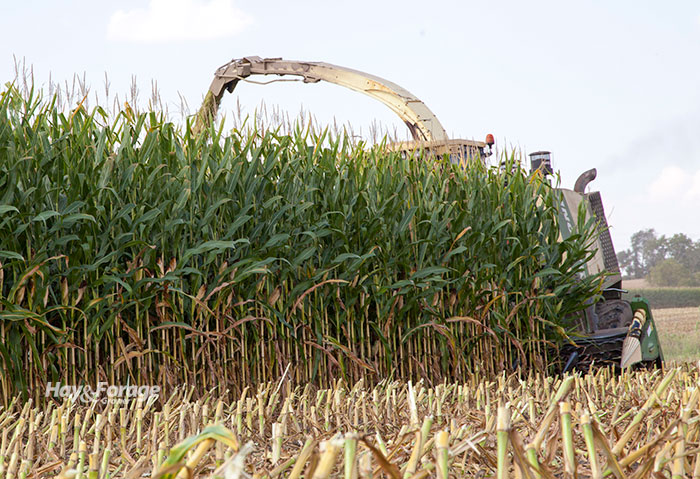 Throughout Northern U.S. dairy regions, forage harvester hay heads will soon be replaced with those of a corn silage ilk, and processor rolls will be cranked down.

Much has been learned and is still being learned about getting the most milk out of corn silage.

“Fiber digestibility in a healthy plant does not really decline significantly,” Mahanna noted. “On the other hand, if plants are suffering with foliar or stalk diseases to the point where they begin to cannibalize themselves, then fiber digestibility will be compromised.”

If plants are healthy, Mahanna suggested that dairy producers target 36% to 38% dry matter as their harvest “sweet spot,” acknowledging that some nutritionists still prefer starting to chop at 30% to 32% dry matter.

“By delaying harvest to about 3/4 milkline, we can capture significantly more starch, which increases by as much as 1 percentage unit per day,” Mahanna said. “At the same time, we’re not sacrificing fiber digestibility, if the plants are healthy.”

Mahanna also emphasized that harvesting over 38% dry matter is not recommended because the crop is harder to pack and is more prone to disease pressure as it approaches black layer.

The nutritionist’s second recommendation is to not high-chop droughted plants. Mahanna said that droughted corn silage will feed 60% to 70% as well as normal corn silage, even though there’s not much starch in it. This is because there is still lots of residual sugar in the plant that didn’t get translocated and converted into starch.

“The biggest problem with droughted corn is that there isn’t much yield,” Mahanna explained. “We really don’t want to compromise what yield we do have by high-chopping.”

Although some people suggest high-chopping to reduce nitrate concentrations in the crop, Mahanna noted that 50% of the nitrates are degraded and lost as gas during fermentation. “I’ve been working in dairy nutrition for 45 years, and I’ve yet to run into a nitrate issue with dairy cattle being fed fermented corn silage.”

Mahanna’s third key to realizing a successful corn silage harvest is to pay close attention to both chop length and kernel processing.

“There is no ideal chop length for corn silage,” he said. “It depends on the inclusion level of all the other forages in the ration.”

Most producers typically chop at about 19 millimeters (mm) for corn silage. Mahanna cited some research from the Miner Institute in New York that indicates particle size influences eating time more than rumination time. This is because cows tend to chew to a relatively uniform particle size before swallowing. As a result, the researchers suggested that corn silage be chopped no longer than 16 to 22 mm. “Prolonging eating time is something we don’t want to do,” Mahanna asserted.

If chopping at 19 to 22 mm while also delaying harvest to near 3/4 milkline to capture more starch, adequate kernel processing is essential.

“I used to talk a lot about roller wear and gap settings,” Mahanna said, “but I’ve come to realize that the roller mill differential is just as or more important. Historically, the differential in speed was only 10% to 20% between rolls. For most newer choppers, the differential is 40% to 50%. That really improves their effectiveness.”

The nutritionist said it’s critical to monitor processing during harvest. This is easily done with a 1 liter-sized cup, which can be filled with fresh-chopped corn silage and then dumped out for examination. Ideally, two or fewer whole or half kernels should be in the cup’s sample volume.

Mahanna said that he likes to see a lab-determined kernel processing score of around 70%. He said there’s little advantage to being much higher than that value. After new corn silage feeding begins, analyzing fecal starch samples from cows can help verify how good of a job was done processing kernels.

Corn silage is loaded with yeast. Stopping the potential detrimental heating that is caused by yeast is Mahanna’s fourth key to feeding a quality crop.