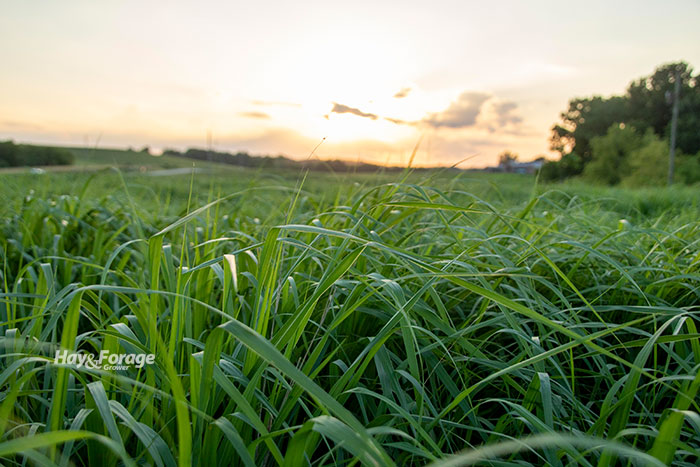 Incorporating grass into dairy rations is becoming more commonplace across the United States. Although harvest timing is critical for most forage crops, grasses demand a raised awareness of this criterion.

Cody McCary, a forage specialist with Vita Plus, says grass silages can offer flexibility in feeding programs for dairy cattle, but they must be cut early to realize their nutritive potential. As forage matures, there is usually a trade-off between quality and yield.

To maximize quality, McCary recommends cutting grass at the boot stage. He encourages producers to consistently monitor forage before harvest because grasses can rapidly progress from one stage of maturity to the next.

“For example, the boot stage in ryegrass may only last a few short days,” McCary says. “When you throw in some unforeseen circumstances, such as weather delays or hotter than normal temperatures just prior to or during harvest, you may find yourself easily missing predetermined quality goals.”

“Lignin acts as a framework, attaching to more digestible portions of the fiber and limiting NDF digestibility, so grasses achieve a greater extent of NDF digestion than alfalfa,” McCary explains.

Another comparable component of grass and alfalfa is nonfiber carbohydrates (NFC) concentration, which tends to be lower in grasses. Therefore, McCary says it may be beneficial to incorporate grasses into dairy rations where NFC must be moderated and NDF is low.

Despite efforts to harvest grass at peak quality, farmers may find themselves behind schedule. In this case, McCary suggests capitalizing on yield and feeding forage to animals with lower energy requirements instead.

“The grass crop can be harvested at a later stage of plant maturity and targeted toward dry cows and heifers,” he states. “Greater NDF and lignin concentration, decreased crude protein concentration, and decreased NDF digestibility should be expected in comparison to less mature counterparts.”

Because of a lower NDF digestibility in more mature plants, livestock might experience faster gut fill, leading to a limited intake. Moreover, some grass species develop hollow stems as they mature, which can hinder packing density in silage piles and allow oxygen to infiltrate stored feed.

“It has been shown that higher silage mass packing densities have less dry matter loss, and the removal of oxygen is necessary for efficient fermentation. This may necessitate a shorter theoretical length of chop in mature grass stands,” McCary notes. “Current recommendations for theoretical length of cut for grass silage are 1/4 to 3/8 inch.”

Drought mitigation is ongoing Next