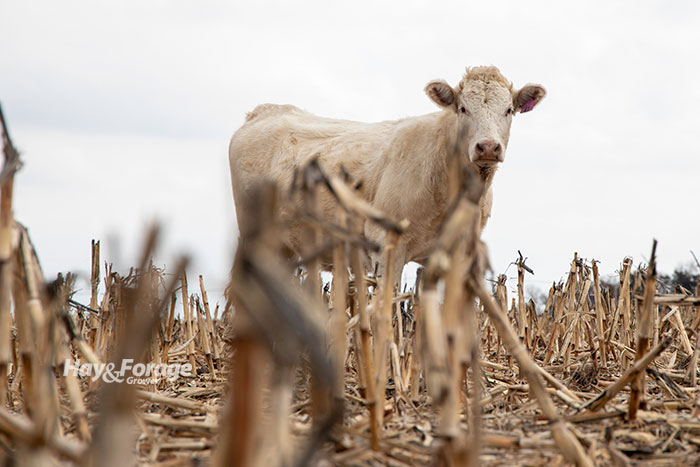 Grazing cornstalks in the fall and winter can be an economical feeding strategy that offers relatively high-quality feed for beef cattle. With that said, cows will selectively graze corn ears before stalks, husks, and leaves, which can disrupt rumen function.

While the amount of leftover corn grain is rarely enough to cause health concerns, ear drop rates vary with growing season and harvest conditions. Russ Daly with South Dakota State University notes windy conditions may cause more ears to fall, and some corn hybrids seem to have greater ear drop than others.

The extension veterinarian explains when cattle consume excess corn grain, their rumens are overwhelmed with an influx of carbohydrates — also known as grain overload. Microbes process the grain and produce lactic acid as a by-product, which encourages other types of rumen bacteria that thrive in acidic environments to proliferate and produce even more lactic acid.

“The result of all this lactic acid build up is a wildly out of whack population of rumen microbes,” Daly states. “By-products of all this acid production create an osmotic pressure problem where body fluids travel from the bloodstream into the rumen to try and dilute the problematic substances.”

At this point, the rumen will fill with fluid, yet cows will be dehydrated. Lactic acid that is absorbed into the bloodstream will interfere with organ systems, and affected animals will show signs of weakness and staggering. Daly says cows may develop diarrhea with undigested corn in the stool, and in extreme cases, animals will lay down and refuse to get up.

Administering intravenous fluids with alkalinizing agents like bicarbonate may remedy the situation; however, this may not be practical. Daly suggests giving animals displaying mild signs an antacid solution, but he advises against forcing cows to drink water.

“Even though the animal is dehydrated, pumping the rumen with fluid or even allowing water consumption tends to make matters worse,” Daly cautions. “Given enough time and support, animals that are less severely affected will often recover, although some will have long-term effects such as laminitis and abnormal hoof growth,” he adds.

Daly recommends producers be proactive about cornstalk grazing to mitigate the risk of grain overload. Consider using polywire to allocate smaller portions of a field instead of allowing animals to graze the entire area. This will ensure a better balance of nutrients from ears, stalks, husks, and leaves, and it will help cattle adapt to higher volumes of grain over time.