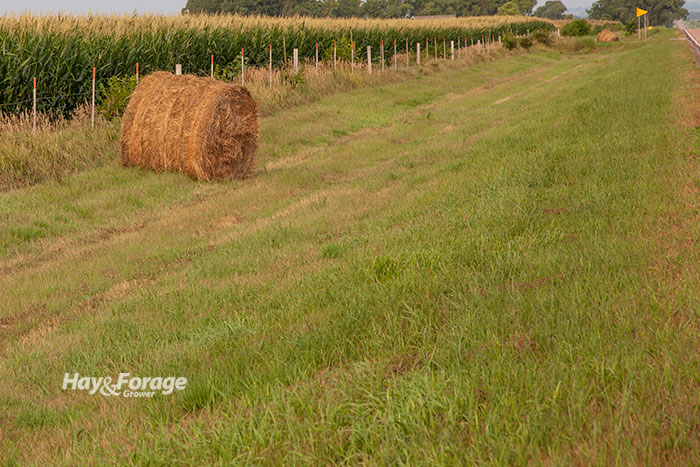 As we learned too often during the pandemic, artificial life support is sometimes needed to see people through a tough time and get them to better times.

And so it is with ruminant livestock production during times of drought.

Nobody asks for drought, especially to the degree that many areas in the U.S. have experienced this year. Pastures and hayfields just won’t grow under such conditions, and that’s a hard pill to swallow when there’s livestock to feed.

As the saying goes, “Desperate times call for desperate measures,” and for some livestock producers, that means seeking life support and baling road ditches or Conservation Reserve Program (CRP) acres. Concerning the latter, the USDA’s Farm Service Agency offers the opportunity for emergency haying and grazing on certain CRP acres in a county designated as D2 or higher on the U.S. Drought Monitor, or in a county where there is at least 40% loss in forage production. Here’s a current map.

The ability to bale road ditches differs by state and municipalities, so check out local ordinances before greasing the mower.

Be it ditch hay or CRP, the end product is very similar, although the former may include more roadside debris and litter. In either case, it’s important to know what your end product can offer and how to feed it.

CRP: an acronym for crappy hay?

The quality of CRP land varies widely in terms of desirable species. Forbs and other woody species make some of these acres difficult to mow, let alone feed. On the plus side, haying and grazing opportunities on CRP land are fairly economical, but in most cases, the forage is being harvested well past the optimum maturity for top forage quality.

Without being harvested earlier in the season, the mature CRP hay will be low to moderate in crude protein (5% to 10%) and low in energy (less than 50% total digestible nutrients or TDN). The overly mature forage will likely be long stemmed and require a long retention time in the rumen.

As with ditch hay, view CRP hay as one of several feed ingredients in the diet. Such hay needs to be tested so that a suitable supplementation program can be developed. It’s almost certain that supplemental protein will be needed to help feed rumen microbes and ensure proper digestion.

Another issue with CRP fields is that they usually are managed with minimum maintenance, which raises the risk for weed encroachment. Feeding CRP hay on currently well-managed pastures may introduce undesired weed pressure. Carefully consider where you feed baled CRP hay to reduce the chances of weeds infesting existing pastures through seed consumption and natural manure dispersal.

As with CRP acres, ditch hay comes with a favorable price point; however, the road right-of-way is also fraught with peril for both machinery and the cow. A car bumper from a ’97 Pontiac offers little feed value and does nothing for the desired operation of a mower-conditioner.

The condition of road ditches is as varied as the condition of roads. Some ditches provide a rather level and clean stand of cool- or warm-season grasses; others are more suitable as a source of photos for a weed identification manual. Hopefully, it’s not a poisonous weed reference.

Ditch hay is commonly baled in North and South Dakota. Several years ago, North Dakota State University extension agents collected 182 samples of harvested ditch hay from 36 counties across the state to quantify forage quality. They also collected peripheral information about each sample such as the cutting date.

As might be expected, forage quality of the ditch hay samples exhibited a wide range. Most of the hay consisted of cool-season grass species with smooth bromegrass being the most common. Total digestible nutrients ranged from 34.8% to 58.5% with an average value of 52%.

Though the average ash content of the samples was 10.8%, some samples contained over one-third of their total dry matter as ash! The ash component essentially consists of soil particles that are harvested along with the hay. This will generally be more of an issue on unpaved roads.

The researchers strongly suggested sampling and testing any ditch hay to ensure livestock are receiving adequate nutrition because extreme forage quality variation exists. It’s also advisable to walk the area before cutting and remove those pesky used car and truck parts along with other large items people may have chosen to dispose of along the roadside.

For cow-calf producers who rely on pastures and hay to get through the year, there are going to be times of abundant, high-quality forage, and there are going to be years when surviving until next spring is the end goal. CRP and ditch hay can be useful life support components but utilize these resources with the realization that there is high variability in forage quality, weed inclusion, and ash content. As such, consider these feed sources as only one ingredient of the diet and rigorously test all of these types of forages.

The art of the tarp Next

The round bale conundrum Previous