Get more hay from less 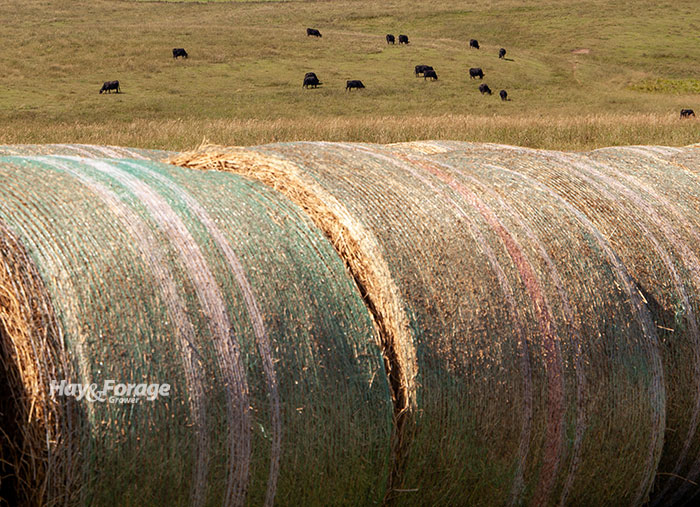 Due to drought and the lack of forage growth that comes along with it, hay inventories for the upcoming winter will be below normal expectations in many areas of the Midwest and Southern Great Plains.

To address this issue, Mary Drewnoski, a beef systems specialist with the University of Nebraska-Lincoln, offered some proven and lesser utilized tips to stretch hay supplies in the upcoming months.

Starting with the low-hanging fruit, Drewnoski emphasized the importance of reducing hay waste, which is a sure-fire method of getting more from less. “Feeding method can have a huge impact on the amount of waste we have,” she asserted.

Processed hay fed on the ground, rolled-out hay for a day’s feeding, open-ring feeders, and trailer feeders all top the list for excessive hay waste at 18% to 20%, Drewnoski noted. From a hay preservation perspective, feeders with a sheeted bottom ring, a tapered cone or basket feeders, or feeding processed hay at a bunk can help cut hay waste substantially.

“Given current hay prices, this may be a year to really look at your feeding methods and think about how you might improve hay utilization,” Drewnoski said of the higher potential for economic returns from reduced hay waste.

Know what you’re dealing with

The beef specialist next emphasized the importance of forage testing. “All hay of the same species is not created equal,” Drewnoski said. “We need to know if our hay is going to meet the nutritional needs of the cows. This year, the drought situation may actually mean we have some higher quality hay than usual, just less of it. It’s possible that the quality will be high enough that limit feeding versus free choice is the way to go, but the only way we’re going to know that is to forage test,” she added.

The quality of hay will impact how much a cow can eat. Drewnoski noted that a 1,300-pound dry cow will eat about 7 pounds more (as-fed) of a medium-quality hay compared to a low-quality hay (see Figure 1).

Cutting the cows’ access time to medium or higher quality hay can not only help match intake to nutritional needs, but it will also reduce hay waste. This is illustrated in the results from a recent feeding trial (see Figure 2). If a producer is short on hay and can’t buy additional hay, Drewnoski said that limit feeding is a great option to stretch existing hay supplies and then use a supplemental feed such as dry distillers grains or corn to fill the remainder of a cow’s nutrient requirements.

Drewnoski said that she has been getting a lot of questions about feeding corn residue bales in round-bale feeders. “These bales are fairly low quality with 40% to 45% total digestible nutrients (TDN) and 5% to 6% crude protein,” she said. “After sorting, the cows will actually consume about a 55% TDN diet with 4% crude protein, but the intake is very low — about 1.2% of body weight. Cows will spend a lot of time sorting and waste 40% to 45% of the bale,” she added.

Drewnoski said that cows will only eat about 1.2% of their body weight of corn residue bales, or about 15 pounds of dry matter. “These corn residue bales can be a hay stretcher, or they can be fed with a supplement, but alone, they are not going to meet a cow’s needs.”

To accurately limit hay feeding while also meeting the herd’s nutritional needs, it is going to mandate that a representative hay sample be taken and submitted to a lab. This will require a hay probe, Drewnoski said. “Grab samples from the field just won’t be accurate enough,” she asserted.

The beef specialist suggested coring 15 to 20 bales per lot of hay. She defined a hay lot as bales from the same field that are harvested on the same day and are of similar plant species.