The author is a managing partner in Elite Ag LLC, Leesburg, Ga. He also is active in the family farmin Rutledge. 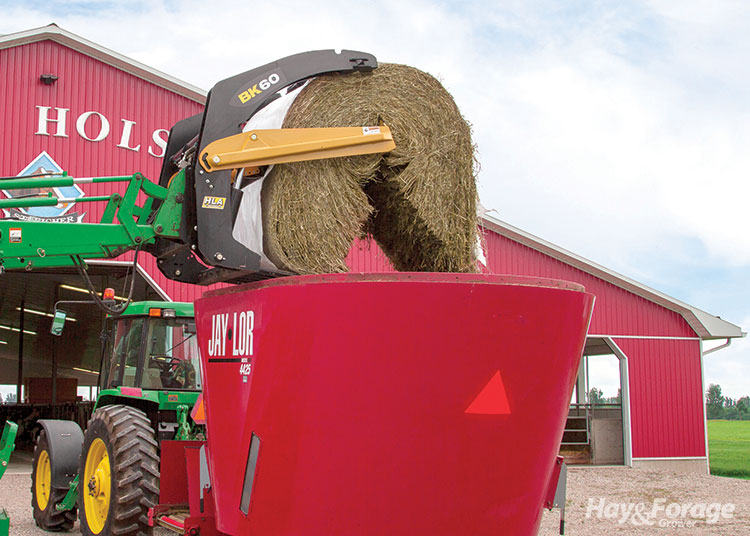 Processing bales before they are placed into a total mixed ration can save time and reduce wear on the mixing wagon.

As cooler weather begins to sweep across the country, livestock producers, especially cattlemen, start making plans to feed their stock during the upcoming winter. This is nothing new and has been going on since the first cattle were brought by the Spanish into what is now Florida back in the early 1500s. Hauling feed and hay to livestock is often a necessary evil and can get expensive, especially with the high price of commodities and lack of Western hay from the drought. I wanted to go over a few things that can make this job easier, possibly save some money, and may offer improved cattle weight gains.

Chores have always been just that — a chore — but if we can speed things up or make them more efficient, at least we can feel better about doing them on a daily basis! We’ve previously discussed adding a vertical mixer to your program. While it may not work for everyone, those who have them understand the trouble of removing net wrap and plastic from bales. Getting on and off the tractor or loader makes mixing harder than it should be.

We now have numerous customers who have chosen to use a bale slice attachment when loading their mixer. This unit will mount to any loader, slice the bale, and hold on to the net and/or plastic wrap so you can put the unwrapped bale in a feeder, mixer, or in a pile. For operations feeding more than 20 bales per day, this can really save some time and cut down on hay waste. You can also get buckets that attach and make loading the mixer even easier.

Bale slicers can also save money on diesel fuel and reduce vertical mixer knife wear. Mixing time can be cut by over 20%, even if your baler does not have a precutter. These knives can add to your mixing efficiency by having the bales preprocessed before being added to the mixer.

Chopped hay or baleage is better for your cattle. There have been numerous studies showing how chop length affects digestion in cattle. One study done at The Ohio State University tested dry hay fed to steers and reported some interesting results. Both cattle groups were fed the same hay and concentrate, but one group had its dry hay run through a hay grinder. The group fed the processed hay gained 1 pound more per day than the group that was fed unprocessed hay.

The processed hay enabled the cattle to boost their intake, which helped account for the improved weight gains. Feed intake increased because they could digest the smaller particles of hay faster in the rumen.

Everyone should be able to take this information and implement it in some way on the farm or ranch. This could be by hiring a custom hay grinder to come in and process hay before it is added to the mixer. You could investigate adding a bale slicer to speed up the feeding process and help shorten the hay particle length. This could even be used when putting hay into a hay ring.

I believe that the best place to start is in the hayfield when you are baling hay. Consider a round or big square baler equipped with precutter knives. You can use as many or as few knives as you want to fit your feeding program, but obtaining a chop length of about 4 inches is the ideal length for cattle to consume and digest hay efficiently.

Consider one or a few of these bale processing options on your operation this winter. I believe you will see a big difference in cattle performance next spring, which will also make a difference in your back pocket!

This article appeared in the November 2022 issue of Hay & Forage Grower on page 36.

Breaking out the crystal ball Previous