The author is a managing partner in Elite Ag LLC, Leesburg, Ga. He also is active in the family farm in Rutledge. 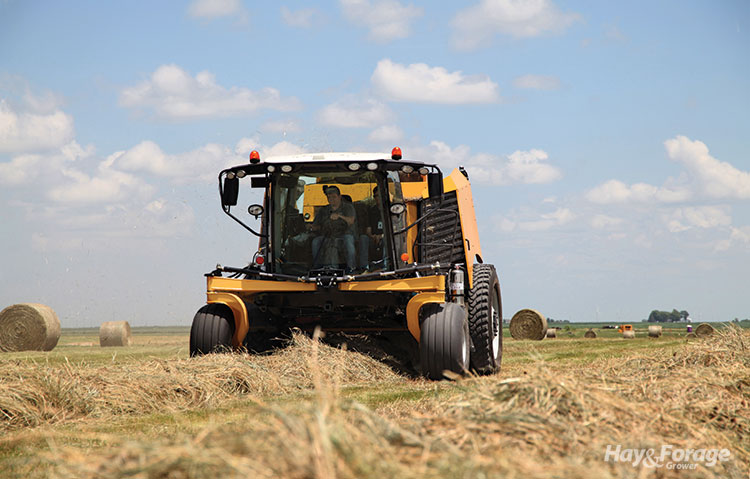 The self-propelled Vermeer ZR5 is one of new, high-tech innovations in the round baler market. Life expectancy for the machine should be high.

As the cold weather sets in and daylight hours shorten, it usually allows for more time with our families as well as time to ponder improvements to our operations. Some could be looking to upgrade the baling tractor while others may just be looking for a new rake. Whatever the improvement may be, it often involves getting a “bigger and better” piece of equipment. It’s just our nature as farmers — we don’t want to buy every acre of ground, just every acre that touches the acres we already own!

This same philosophy can be seen in the evolution of baling hay. We’ve moved from making piles in the field with pitchforks to the Hesston StackHand and small square baler. Eventually, the large round baler and large square baler dominated the market. Each new technology offered a way to cover more acres and put up more tons in a day. This is also the case for today’s major advancements in the round baler market. We now have several manufacturers producing nonstop round balers, and we even have a self-propelled model.

Manufacturers are all pushing the limit when it comes to innovation in what most considered an old and somewhat stagnant market. Usually, it’s the tractor, sprayer, or harvesting segments that push innovation the most, but these nonstop and self-propelled balers are proof that baling hay won’t be left in the dust.

The tonnage one of these new technology balers can push through is impressive, and they’ve had farmers talking in coffee shops throughout the U.S. What isn’t so impressive is the price tag that comes with each of these baler types. The prices on the nonstop balers and wrapper combos are estimated to be over $150,000. Since no models are currently for sale from dealers in the U.S., that price is mere speculation. The self-propelled Vermeer ZR5 comes in at around $250,000, but since it’s a modular machine, the life expectancy of the machine is pretty high.

These new balers have the potential to really change baling efficiency in the future. The first owners of these balers will no doubt have a competitive advantage, but what concerns me are the second and third owners of these machines. In the past, most round balers have two or three different owners before they are “put out to pasture” to retire. These days, the first operators are putting more bales on them before they decide to trade, mostly because they are covering more acres.

The first owner usually takes most of the depreciation, and if a baler is traded in with 15,000 bales, it can still have some useful life for its next owner. But when we are talking about a price of over $150,000, then a used baler would usually be 50% to 60% of the original cost. So, we would expect a baler with 15,000 bales to cost the second owner around $75,000. I know we get excited about these new improvements to our industry, but as a customer and dealer myself, I’m not sure how many farmers will be willing to fork out that much cash for a used baler.

With that being said, it is inevitable that some of these balers will be sold and then be traded back in, but unless the manufacturers have figured out a way for these balers to last 50,000 bales, I’m not sure we can expense out $75,000 in deprecation on only 15,000 bales. That’s a cost of $5 per bale just to own the baler and doesn’t include the tractor, net wrap, fuel, or labor needed.

In the early 2000s, baler depreciation was around $1 per bale; these days, with baler prices over $60,000, first-owner depreciation is closer to $3 per bale. Are farmers going to be willing to accept $5 per bale in depreciation? Only time will tell.

I think these balers are great innovations for the hay and forage industry, but one of the biggest deterrents in the round baler market isn’t the speed or acreage you can cover, but how long the balers last before they need major work. I don’t see any reason why we can’t design a baler to last 40,000 bales and make 25,000 bales before needing major work. Then, we as farmers can justify the major expense of owning the high-tech balers of the future.

This article appeared in the January 2023 issue of Hay & Forage Grower on page 12.