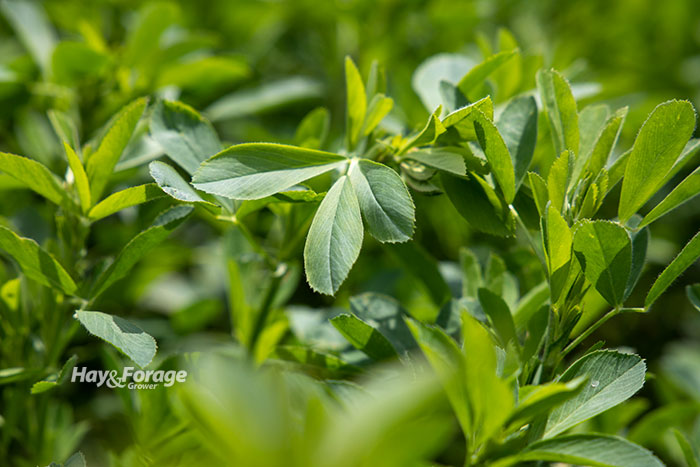 “Alfalfa is a virtuous queen,” began Dennis Hancock while speaking to a packed house at the World Alfalfa Congress last month in San Diego, Calif. “There is a long list of well-known production and environmental benefits that she brings, and alfalfa and the dairy industry are intimately linked.”

The director of the U.S. Dairy Forage Research Center (DFRC) in Madison, Wis., noted that alfalfa provides the dairy industry with a cheap source of protein, and about half of the protein in alfalfa haylage is soluble. About half of the soluble protein consists of free peptides and amino acids, which helps boost microbial nitrogen yield in the rumen.

“Alfalfa also has value because it provides physically effective fiber,” Hancock said. “Its stems are important for stimulating chewing and saliva production, which, along with the buffering capacity of alfalfa, helps keep the pH of the rumen around 6. This promotes good cow health.”

Alfalfa tends to pass through the rumen faster than grasses. This lowers gut fill and enhances dry matter intake, which drives milk production.

Alfalfa also has a relatively high amount of pectin that now falls under the category of residual organic matter in the new Nutrient Requirements of Dairy Cattle publication. This soluble carbohydrate fraction is highly fermentable, promotes milk production and milkfat synthesis, and provides fermentable carbohydrates without overfeeding starch and raising the risk for rumen acidosis.

“So, why aren’t we growing more alfalfa?” Hancock asked his audience.

The bad and ugly

Hancock noted that alfalfa acreage has been declining in the U.S. and throughout the world for many years. The descent in alfalfa acres has not been because of significantly higher output per acre. Hay yields have been flat while haylage yields have posted about a modest 1% yield gain annually over the past 20 years.

We also can’t blame the shrinking acreage on fewer mouths to feed, the native Kentuckian noted. Both dairy and beef cow numbers have held relatively steady in the past 20 years. 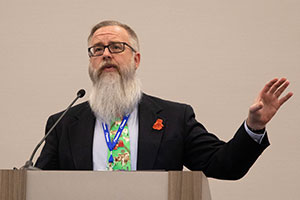 Dennis Hancock
“Alfalfa has a long list of benefits, but it also has an equal list of quirks and challenges,” Hancock asserted. “Heading up the list is the fact that the cost of producing alfalfa forage is exceptionally high relative to other feedstuffs.”

In addition to the cost of production, Hancock noted that alfalfa has a relatively short yield peak comprised only of its second and third production years. “In my opinion, we need to develop varieties and strategies that will enable alfalfa to get out of the gate quicker and persist longer,” he said.

Producing alfalfa also brings with it the expense of multiple cuttings per year with the potential for variation in forage quality. In the silo, alfalfa is subject to significant nitrogen losses in the form of ammonia because of its high soluble protein content.

In discussions with his dairy nutrition scientists at the DFRC, they have told Hancock that practicing dairy nutritionists won’t include alfalfa in cow rations at levels higher than 30%, and most rations are far below that value. Higher levels of alfalfa inclusion can result in elevated blood or milk urea nitrogen levels and excessive nitrogen secretion in urine.

Further complicating the challenges with feeding high levels of alfalfa and its lofty concentration of rumen degradable protein is the need to supplement rumen undegradable protein and certain sulfur-containing amino acids such as methionine.

“Even with the laundry list of grievances to air, alfalfa still has a lot of opportunities, and I still believe in the future of alfalfa,” Hancock said.

He continued, “We need to better define alfalfa’s role in the carbon market, promoting its benefits in crop rotation and perennial forage-based livestock systems. Alfalfa is the ultimate cover crop, offering long-term groundcover and the ability to capture nitrates from deep within the soil profile. We also need to do a better job of promoting alfalfa’s ecosystem services as a beneficial crop for pollinators and other wildlife species,” he added.

Hancock challenged plant breeders to accelerate the rate of yield improvement, especially in the establishment year. There’s also going to be a need for additional public investment in alfalfa development.

“With the shakeups going on in private industry, public breeding efforts will elevate in importance,” he surmised. “Further breeding goals could be targeted for greater disease resistance, traffic tolerance, and stand persistence. We also need to develop varieties for compatibility with companion crops, mutualism with perennial grass crops, and high stress tolerance,” Hancock suggested as areas where improvement is warranted.

The DFRC director said that we should continue to look globally for opportunities and further develop our export markets. “One of things we really need to be doing as an industry is harmonizing our forage quality standards, both the metrics that we use, and the ways that we analyze our forage.”

Hancock said that there are end users — countries, animal species, and U.S. regions — that remain untapped.

As for the alfalfa plant itself, he asserted that we need to transform the plant so that more nitrogen is preserved during storage and utilization by ruminants. “We need to look at dairy ration alternatives that make higher levels of alfalfa inclusion possible.”

Hancock concluded by issuing a challenge. “I want all of you to think about a visionary approach to alfalfa. Be like George Washington Carver and identify opportunities not seen by others,” he said. “There are challenges and obstacles, but from the standpoint of animal nutrition, human nutrition and nutraceuticals, and new product development, I think there are great opportunities to exploit. As Carver once said, ‘Where there is no vision, there is no hope.’”

Crisis looms on the Colorado River Next