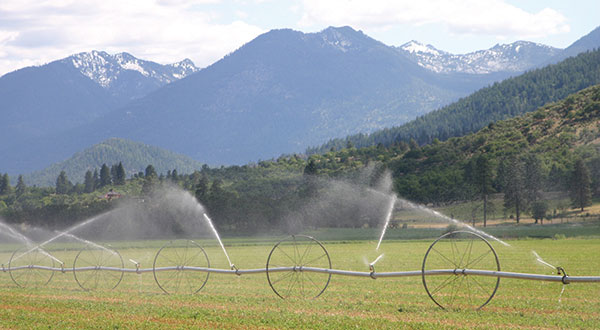 Wheel-line irrigation system. Moisture stress to alfalfa regrowing after a cutting
has the greatest impact on yield.

The dead of winter is probably not the time producers are thinking about how to best irrigate their alfalfa crop. However, this may be a good time for Western alfalfa producers to consider irrigation modifications in time for the coming season. In the western U.S., alfalfa yield is likely limited more often and to a greater degree by irrigation management than by any other single factor. Optimum irrigation also is absolutely critical for top yield.

One would think that alfalfa, a deep rooted perennial crop that can survive long periods of drought conditions, would be an easy crop to irrigate properly. However, alfalfa is actually a fairly difficult crop to irrigate for several reasons. Yield is directly related to evapotranspiration (ET, or crop water use). Unlike many other crops where only a portion of the crop is harvested (typically the seed head, fruit or root), nearly the entire aboveground biomass is harvested with alfalfa. Therefore, when less than full ET is available to the crop, growth is reduced and yield suffers.

Another key factor complicating alfalfa irrigation compared with other crops are the long irrigation downtimes due to the multiple cuttings per year. For this reason, alfalfa growers have significantly reduced flexibility as to when they can irrigate. The overwhelming majority of the alfalfa in the western U.S. is grown for hay production. There is a long time period around cuttings when growers cannot irrigate. To aid curing, growers do not want to irrigate too close to harvest because cutting on “wet ground” slows the drying rate of the alfalfa. Similarly, growers obviously cannot irrigate while the alfalfa lies on the field curing and must wait until the bales are removed before irrigating.

How long fields cannot be irrigated around a cutting varies considerably between areas, primarily depending on the yield level, soil type and weather conditions. High yields simply require more time to cure. Soils with a high clay content retain more moisture, and a longer interval between irrigation and cutting is needed. Lastly, warm and arid weather conditions are more conducive to rapid curing.

Depending on these factors and how quickly the alfalfa cures, growers in theory may be unable to irrigate for a six to 20 day period around cuttings. However, in actuality the interval between irrigations around a cutting may be much longer, and can depend on the irrigation system.

The interval was shortened somewhat for fields irrigated with a center pivot (Table 2). The non-irrigation interval around cuttings for center pivot irrigated fields was 31 days, 19 days, and 17 days for first, second, and third cuttings, respectively. (Two of these fields had four cuttings rather than three per year and that is the reason for irrigation data for the third cutting on some of the pivot-irrigated fields.)

A logical question is why were the observed intervals without irrigation so much longer than one might think? The estimate above of six to 20 days is the combined amount of time it may be from when irrigation is ceased until it can be resumed after the hay is baled and bales removed. However, this is only part of the delay. Multiple irrigation sets are normally needed to irrigate a field and it can take several days up to a couple of weeks to irrigate an entire field. The portion of the field that is irrigated last before a cutting is also irrigated last after irrigation resumes. Therefore, the interval between irrigations around a cutting is not just the time between irrigation and cutting plus the curing time, but must also include the amount of time it takes to irrigate an entire field.

Center pivots normally apply less water per irrigation and travel faster across the field and therefore the non-irrigation interval around cuttings is usually shorter than with wheel-lines or border-strip flood irrigation. Other factors such as decisions about weather can further lengthen the time period without irrigation around cuttings. Oftentimes, growers delay cuttings to dodge rain events and this further lengthens the time from the last irrigation until cutting. Even if it does rain, the amount of precipitation is usually not enough to keep up with the water needs of the crop. 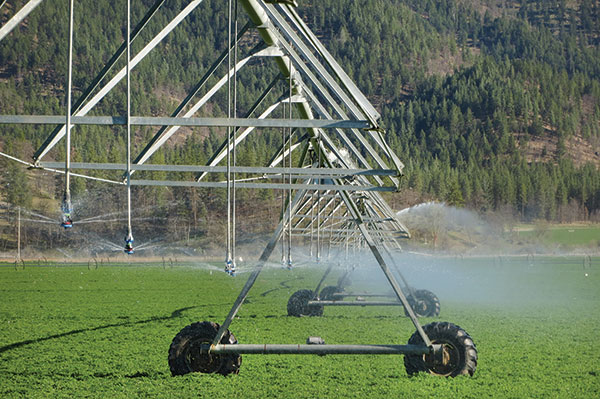 Center pivot irrigation has an advantage over wheel-line and flood-irrigated fields in that the whole field can usually be irrigated quicker after a cutting.

This long period without irrigation around cuttings is reflected in soil moisture levels. Our research over the years with soil moisture sensors has shown levels are at their lowest during the harvest period. Oftentimes, soil moisture falls below those required for optimum yield. Sometimes the soil becomes so dry that growers are not able to refill the soil profile with subsequent irrigations and soil moisture remains below that needed for maximum yield for the remainder of the season.

Growers should pay close attention to how long irrigation is suspended around cuttings on their own fields to see if improvements can be made. Excessively long intervals around cuttings can have a significant impact on yield because moisture stress to alfalfa regrowth after cutting is believed to have a greater detrimental effect than moisture stress at other growth stages.

It is important to monitor soil moisture levels and irrigate as needed before a cutting thereby ensuring that the soil does not become excessively dry through the haymaking process until the field can be irrigated again. Additionally, it is important to employ haymaking practices that accelerate the drying rate of alfalfa (proper conditioning, wide windrows, timely raking, and so forth) to shorten the haymaking process and allow earlier irrigation after cutting. There is no easy silver bullet solution. A big part is just being aware how dry soil can become around cuttings and tweaking irrigation practices to avoid excessively dry soil moisture conditions.

This article appeared in the February 2016 issue of Hay & Forage Grower on pages 10 and 11.

A manure road less traveled Next