By Dennis Hancock
The author is an associate professor and extension forage specialist at the University of Georgia.

At the base of healthy ryegrass, a mass of white adventitious roots and cobweb-like fungal mycelia develop just as it enters its most rapid phase of growth.
Every fall, around 3 million acres of bermudagrass and bahiagrass are overseeded with annual ryegrass. The use of ryegrass to extend the grazing season is a great tool to minimize hay feeding. But the transition from annual ryegrass back to summer pasture sometimes comes up fast. In the South, spring is measured in days, not weeks or months. As the temperatures rise, ryegrass goes from lush and vegetative to stemmy and mature over the course of just a few days. So, it is good to have a plan to handle that transition.

There are certain enzymes and proteins involved in C3 photosynthesis that become distorted and unstable when exposed to high temperature. So, hot weather slows down the photosynthetic “assembly line.” Once the temperature goes above 85°F for three to four hours or more per day, this assembly line essentially stops. Consequently, the plants cease to produce vegetative growth. Cool season annuals respond to these conditions by rapidly reallocating most of their resources into setting seed, giving rise to an abundance of seedheads and lower quality forage.

Just as ryegrass enters its rapid growth phase, veteran growers have noticed the canopy floor often gets covered with a white mass of adventitious roots and the cobweb-like mycelia of fungi, which grow in association with the roots (see photo). An old-timer once told me, “Those white roots and web were so that ryegrass would stay anchored, otherwise it grows so fast it would jump out of the ground.” His humorous take on this observation has proven to be a useful visual clue to determine when ryegrass growth starts to skyrocket.

Most will stock ryegrass pastures on the basis of its early season growth rate and may not have the high stock densities necessary to keep up with the growth in March and April. Understocked pastures end up with a massive amount of ryegrass that is growing over the top of bermudagrass and bahiagrass. This is challenging to these warm season perennials, as they are trying to wake up from winter dormancy at this same time. As a result, the bermudagrass or bahiagrass underneath the ryegrass is severely weakened and starved for sunlight, water and nutrients.

Research in North Carolina showed that bermudagrass yields were reduced by 40 to 50 percent when the fields were overseeded with ryegrass and the ryegrass was taken as a hay cutting. There is also some evidence to suggest that ryegrass can be allelopathic, meaning it exudes chemicals that suppress other plants that grow near it. The risk of ryegrass allelopathy is highest when the ryegrass is stressed by disease, heat stress or drought. 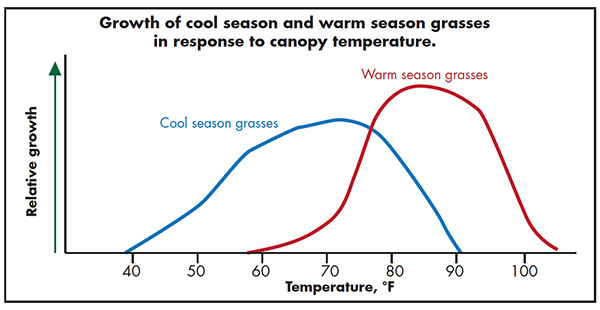 Despite these risks, annual ryegrass is a great forage and quite cost-effective because it reduces the need for winter hay feeding. However, you need a plan to deal with the rapid spring growth rate. One helpful tactic is to reduce or avoid late winter or spring nitrogen (N) applications on some paddocks. For example, you may have 10 paddocks in a rotationally grazed system and choose not to apply N on two or more of them after February. This will avoid promoting too much forage production.

Another useful tactic is to raise the grazing pressure on the ryegrass. Do this by adding more livestock or by changing the rotation sequence. For example, a livestock producer may see that three or four of his 10 paddocks are going to be well beyond the target grazing height by the time the rotation brings the herd back to them. So, take those three or four ryegrass paddocks out of the grazing rotation and cut those paddocks for baled silage (or hay if drying conditions allow).

Alternatively, one could take the ryegrass out of the three or four paddocks that were just grazed by applying 1.5 ounces of Pastora herbicide per acre once it has begun to regrow. This should kill the ryegrass and release the bermudagrass. Don’t use Pastora for this purpose in bahiagrass pastures, as Pastora will kill bahiagrass. Also, don’t use Pastora on fields where summer annual forage plantings are planned.

The author is an associate professor and extension forage specialist at the University of Georgia.

Once the bermudagrass or bahiagrass emerges from the literal shadow of the annual ryegrass, it is crucial to provide nutrition so that it will recover quickly. Immediately after ryegrass growth ceases or is terminated, provide the summer pasture with 50 to 75 pounds of N per acre and any phosphorus that may be recommended based on the soil test. Unless the soil test potassium (K) level is high enough that none is recommended, apply at least an equivalent amount of K2O per acre as the N rate being applied.

Keep in mind that a good ryegrass crop may remove or tie-up the equivalent of more than 200 pounds of K2O per acre during the season. Even with more uniform manure distribution in rotationally grazed pastures, there still can be K-deficient areas. Apply any additional K that is recommended based on the soil test levels in early August through mid-September. This is when K applications can most effectively strengthen bermudagrass and bahiagrass as root reserves are beginning to be stored for winter dormancy.