By Howard Neibling
The author is an extension water management engineer at the University of Idaho. 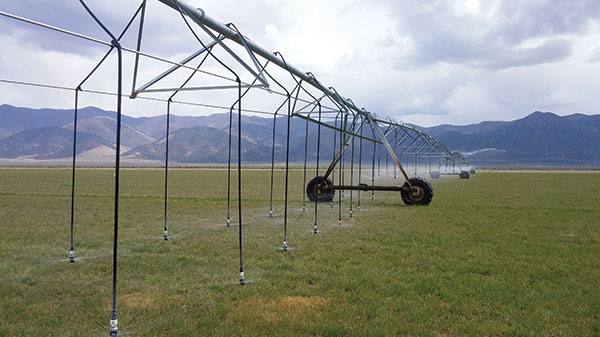 Double goosenecks and truss-rod hose clamps used to decrease the drop spacing and increase the number of drops.
Irrigated agriculture is under greater pressure to produce forage and other crops with less water. This requirement is driven by a number of factors: a series of below-normal irrigation water supply years, a series of higher-than-normal crop water use years, and growing demand for limited water resources.

Our water supply experiences of the past few years may be a preview of more serious conditions to come. Although the timing and severity of water supply reduction will vary with location, general trends indicate that future supplies will be limited to some degree. Therefore, adoption of changes in irrigation equipment design and practices that conserve water while maintaining crop yield and quality will help minimize the long-term impact of reduced water supply on irrigated agriculture.

LESA, or Low Elevation Sprinkler Application, is a modification to typical sprinkler head mounting on center pivots or linear-move machines that minimizes evaporation and wind drift losses by placing sprinkler heads closer to the soil surface. From 2013 to 2015, the Bonneville Power Administration funded a joint University of Idaho / Washington State University study to develop a more efficient water application method for center pivots in the Pacific Northwest.

Because most irrigation systems designed for the inter-mountain Northwest require uniform soil coverage for germination, and must apply nearly all the water required for crop production, our design objectives were to: 1) apply water in-canopy near the soil surface to minimize evaporation and wind drift, 2) apply water uniformly for germination and quality crop production, 3) apply water in a manner that will minimize soil surface crusting and maintain infiltration rates throughout the entire irrigation season, and 4) minimize costs for new or retrofitted systems.

The LESA system we developed and tested (image shown left) had the following characteristics:

All equipment is currently available “off the shelf” from most irrigation equipment dealers.

Spray nozzles with grooved plates that apply water in about a 15-foot wetted diameter.

Drop nozzles suspended from the pivot lateral by flexible drop hose, passing over the pivot truss rods, and held in place by snap-on clamps on the truss rods.

Sprinkler head height of about 12 inches above the soil surface.

Drop spacing about 4 to 5 feet (typically double the number of drops).

Applies to moderate or high-intake soils where runoff is not an issue.

For older pivots with spacing between outlets of 9 to 10 feet, we replaced the single outlet gooseneck fitting with a double gooseneck.

Adjacent spans of LESA and conventional sprinkler mounting were tested on six pivots in Idaho, four in Nevada, and a number more in Washington and Oregon. Sprinkler package designs that applied water near or in the crop canopy delivered almost twice the water to the soil surface on hot, windy days compared to a traditional system (image shown right). Seasonal water savings were 20 to 30 percent relative to the existing sprinkler packages (for example, rotator and wobbler mounted about 5 to 7 feet above the ground).

Water savings are due to less evaporation and wind drift loss of irrigation water as it falls from the pivot, and to reduction in evaporation of water caught on plant leaves that evaporates and never reaches the soil. This effect is shown in the image at the right. Additional benefits may include reduced lodging in alfalfa and small grains and the ability to keep developing wheat or barley heads drier, therefore minimizing head disease conditions.

Although this approach of mounting sprinkler heads about 1 foot above the ground saved considerable water, it is most effectively used on sandy or other high-infiltration soils where surface runoff is not an issue. Extreme care must be taken if this approach is used on silt loam or other low-infiltration soils, or on fields with slopes in excess of about 1 percent. Additional testing is underway this year to determine the soil and slope limits for use of this practice. 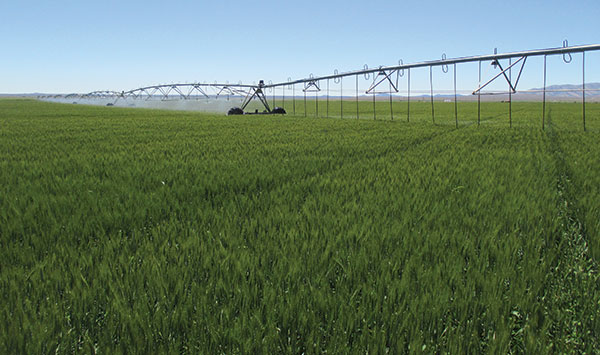 A paired pivot study using one full pivot of the LESA system and one pivot of prevailing equipment (drop nozzles on about 10-foot spacings) was also conducted near Eureka, Nev., beginning in the summer of 2014. Two sets of adjacent pivots (one LESA and one conventional) were established in alfalfa. A third LESA-conventional comparison was conducted on timothy hay. In 2014, the LESA-irrigated alfalfa pivots were able to be shut off for one, and sometimes two days per week while the conventional alfalfa pivots required continuous operation during the majority of the season to achieve similar yields.

In 2015, the LESA pivot on one alfalfa field had water supply reduced by about 20 percent due to well problems, but still yielded nearly the same as the conventionally irrigated field with full water application. Similar results were obtained from the other alfalfa pair, with the grower planning to reduce capacity on the LESA pivot from 900 to 750 gallons per minute. Irrigation on all six pivots was scheduled using soil moisture sensors and data loggers, with information available from web-connected devices.

In all test locations, the 5-foot spacing was sufficiently close to eliminate streaking of crops due to variation in water application, and no surface runoff problems were observed. On fields where topography varies sufficiently to cause nozzles to drag on a significant portion of the field, a spacing of 30 to 40 inches with a modified “bubbler” outlet instead of a sprinkler head may be required for good crop establishment and uniformity. •

Manage the ryegrass transition Next