At first glance, it may appear that hay prices rose pretty significantly in April compared to March. First glances can sometimes be misleading, and that seems to be the case as it relates to USDA’s most recent Agricultural Prices report.

Last week’s report pegged the April all-hay price at $146 per ton, $8 per ton higher than the March average price, but still $22 below one year ago. April alfalfa hay prices rose by $9 from March to $153 per ton. This was $30 per ton less than 2015. The spike in alfalfa hay price marked the second month in a row that the average U.S. price spiked from the previous month.

The USDA price averages account for all qualities of hay sold, and the final U.S. estimate is a volume-weighted average rather than a simple average of state values. Those states with the most volume sales will impact the final U.S. dollar value more than those states with fewer sales. This is where the misleading significant increase occurs.

For alfalfa hay, only one state showed an average month-to-month price jump larger than the overall U.S. price spike of $9 per ton. Mathematically, this makes no sense. When contacted by Hay & Forage Grower, the USDA statistician responsible for crunching the numbers explained the anomaly this way:

“Because we use a weighted average, if a state’s volume goes up significantly as a percentage of the whole, it can skew the U.S. weighted average toward that state’s price point. This occurs even if the state’s month-to-month hay price stays the same. For example, if Arizona’s percentage of all hay sold spikes significantly from March to April as it did last year, because their overall price is higher than most other states it will force the U.S. average higher.”

Looking at the table below and as previously mentioned, only Minnesota had a significant month-to-month alfalfa hay price bump (plus $14 per ton). The next highest jump was only $5 per ton, which occurred in five different states. Several states saw significant decreases: New York (minus $30 per ton), New Mexico (minus $20), and Idaho (minus $10). 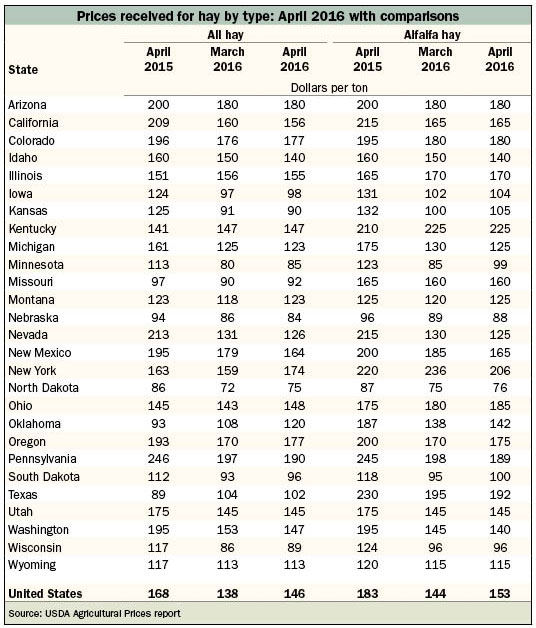