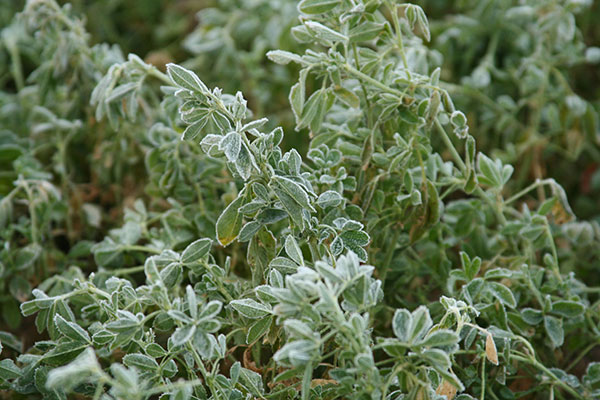 Some areas around the U.S. have already experienced several light frosts, raising questions about subsequent forage use.

Inquiries about the use of warm-season grasses in the sorghum family are the most common concerns, though other forage species are also affected by subfreezing temperatures.

“The issue with grasses in the sorghum family, which includes sorghum-sudangrass hybrids, sudangrass, johnsongrass, and sorghum, is that they contain cyanogenic glycosides and enzymes that convert those compounds to cyanide, also called prussic acid, within plant cells,” says Rory Lewandowski, Ohio State University agriculture and natural resources extension specialist. He addressed the problem in a recent Ohio Beef Cattle Letter.

Prussic acid is a lethal toxin.

Typically, the cyanogenic glycosides and enzymes are located in different areas within the plant cell, so they don’t come into contact. However, when plant cells rupture after freezing, chopping, wilting, or crushing, the cell barriers break and cyanide can rapidly form.

Cyanide is a gas so it will eventually volatilize and leave the plant tissue, but this takes some time. Therefore, the general recommendation for a hard frost is to not allow livestock to graze frost-damaged forage tissues until three to four days have passed.

In the case of light frosts, where the temperature is greater than 28°F, it is recommended to wait two weeks until grazing.

“Probably the safest and least risk practice of utilizing sorghum species forages after frost is as a dry hay or ensiled forage,” Lewandowski says.

When the plants have been cut and are dry enough to bale, the cyanide gas will have volatilized and dissipated from the plant, so there is no feeding risk. When considering an ensiled forage or wet wrapped baleage, the cyanide concentration depletes significantly during the ensiling (fermentation) process. It is recommended not to feed the ensiled forage or baleage for at least four to six weeks after harvest.

Grazing alfalfa after a frost can also cause complications for livestock. The risk of bloating is greater for several days after the plants are exposed to hard frost of 25°F or lower. Once the alfalfa begins to wilt, or a few days have passed, the risk of bloat declines.

For tall fescue pastures, frost is beneficial because it causes the sugar content to improve. “This is why tall fescue works well for stockpiled late fall and winter grazing,” Lewandowski notes.

Cover or mixed forage crop? Next