Winecup Gamble Ranch has 1,500 acres of pivot-irrigated fields and another 500 acres under wheel and flood irrigation. Only 7 inches of precipitation is received annually.

Among the many ranches in the area, the nearly 1-million-acre historic Winecup Gamble Ranch near Montello, Nev., is one operation seeing promising results from the use of regenerative farming practices to improve both their soil health and forages in these challenging conditions.
Managed more conventionally in the past, the ranch has since shifted its philosophy to a more holistic, regenerative focus in recent years. Winecup Gamble Ranch farm manager, Arlen Gentert, confirmed this change of heart, noting he does not rely solely on a single factor when it comes to managing the ranch’s forages. Instead, he said he considers the whole system in every decision he makes.
More forage diversity 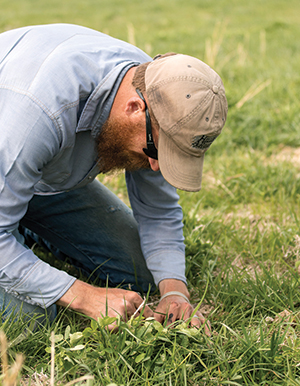 Arlen Gentert checks the seed depth while no-till planting a mix of forage cover crops. The practice is just one way the ranch is trying to build back lost organic matter.

In past years, plants such as tall fescue and alfalfa have made up the majority of the irrigated fields’ forage base. Tolerant of alkali soils, these species thrive in high salinity conditions when irrigated and are common choices for hay operations in the area. After coming on board with the ranch in 2014, Gentert began implementing more regenerative farming practices in attempts to increase forage species diversity and improve soil health.
“There’s a lot of clay and salt in the soil and our water even has salt in it, too. These fields have either been farmed or hayed for the past 120 years, likely with little inputs going back into them,” Gentert said. “For a soil with low organic matter and the challenges we already have, the abuse over the years really adds up.”
Bale grazing
To expedite natural processes while staying profitable, Gentert said he likes to try out new strategies on a smaller scale before going bigger. Among the first of his experiments to help improve soil health on the ranch’s irrigated fields was bale grazing.
“During the times when we need to feed hay, like late fall or winter, we try to bale graze and feed the hay out on the fields,” Gentert said. “It’s basically our fertilizer program since we don’t use synthetics.”
Gentert has tried this feeding method out on both irrigated and dry land fields. Bales are placed and fed in a way that allows the cattle to rotate around a field, spreading the manure and hay waste evenly across the area, he explained.
“We try to be systematic about completely covering a pivot as we are feeding. No gaps, no missed spots,” Gentert said. “You feed in one spot today, the next day you might move over 10 feet.”
Alongside bale grazing, Gentert has taken a page out of cover crop expert Gabe Brown’s playbook, planting diverse cover crop mixes to further build soil health on a few select acres each year. The seed mix for a recent alfalfa field he planted into contained a sundry of annual grasses and legumes, including oats, wheat, rye, kale, collards, turnips, radishes, vetch, and two types of red clover.
To get good establishment, Gentert had to first knock back the existing alfalfa stand. In the past, he has tried various methods, such as grazing an area hard before planting. However, he has found, in most cases, an herbicide burndown is the easiest, most effective option to get a field ready for planting in his conditions. While he tries not to use herbicides, Gentert recognizes sometimes it’s the only option that works.
Early results encouraging
“My plan is to do a couple years of annuals, especially in those areas we are grazing, to jump-start the biological process again,” Gentert said. “Then I’ll go in with perennials and use a mix of something like orchardgrass, wheatgrass, sainfoin, meadow bromegrass, and maybe some others.”
Thanks to both bale grazing and cover crops, Gentert said he is starting to see dramatic turnarounds on the productivity of some of the ranch’s poorer fields. Grass production on bale-grazed fields generally improves the following year, and he has noticed these fields now recover quicker between grazings. In addition, the cover crops he has planted provide a more diverse, higher-quality forage source for the ranch’s grass-fed cattle.
An important component to having success with regenerative agriculture practices, said Gentert, is to find the limiting factor for each field. Then use this knowledge as the cornerstone in your strategy to overcome it. For Gentert, this limiting factor is the organic matter level in his soils. Going forward, he plans to stay focused on the whole system with his management, but will also track his progress by monitoring organic matter levels in the ranch’s soils using tests such as the Haney Test.
“I think organic matter is an important key to all this,” Gentert said. “It will help tell the story of our management and our successes and failures.”

This article appeared in the August/September 2016 issue of Hay & Forage Grower on pages 28 and 29.