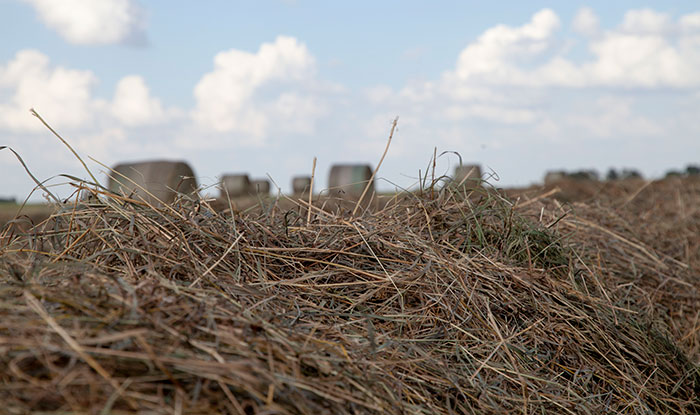 Some producers are still feeling the effects of a poor growing season and are scrambling to find affordable forage options for winter feed. Where drought was prominent, CRP (Conservation Reserve Program) acres where released for hay production to provide a resource for harvesting winter forage.Since CRP hay isn’t something cattle producers regularly work with, questions often arise regarding its utility as a viable feed source. In the University of Illinois’ newsletter, The Cattle Connection, Extension Educator Travis Meteer sheds light on the good, the bad, and the ugly of CRP hay. The good.According to Meteer, the good side of CRP hay is that we have a forage to feed cattle. “Without a base forage, you may have to resort to limit-feeding high-concentrate diets,” Meeter says. “The transition is often difficult, and cows tend to bawl and pressure fences.”Simply put, the good that comes out of CRP hay is having something to keep cows full and provide a base forage for their diet.The bad.The hay that comes off of CRP land is generally poor quality, so it should be viewed as a feed ingredient instead of an entire diet. This hay will be low to moderate in protein (perhaps 8 to 10 percent crude protein) and low in energy with a TDN (total digestible nutrients) value of less than 50 percent. At this level, supplementation will be needed.Since this hay will be mature and long-stemmed, the rumen is going to have to work harder to digest it. Supplementing protein will provide rumen microbes with the energy they need to properly digest this feedstuff.“Bottom line, test your CRP hay and supplement it accordingly,” Meteer advises.The ugly. “Something we may not immediately think about is the potential of CRP hay to contain a large amount of weeds, and more importantly, weed seeds,” Meteer states. Wherever the manure is deposited or spread, CRP hay needs to be monitored for future weed outbreaks.Meteer also warns that if CRP hay is being fed to cows on pasture, be aware that you are potentially introducing multiple and new types of weeds to your pasture.

Kassidy Buse
Kassidy Buse was the 2018 Hay & Forage Grower summer editorial intern. She is from Bridgewater, S.D., and recently graduated from Iowa State University with a degree in animal science. Buse is currently attending the University of Nebraska-Lincoln pursuing a master’s degree in ruminant nutrition.

Strip-graze your stockpiled forages Next

Checking in on those new seedings Previous