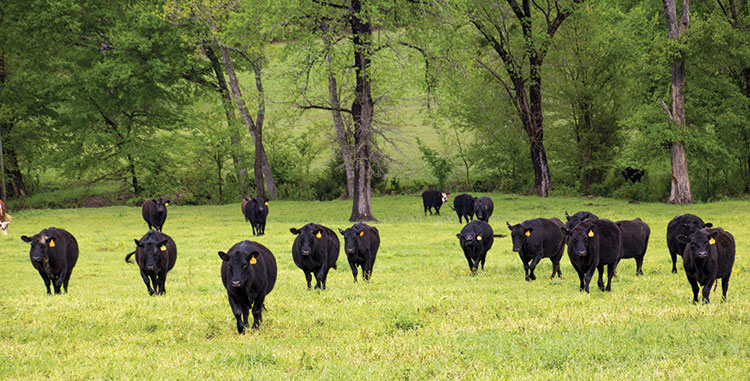 This past year was a challenge for many cow-calf producers across the United States due to a lack of rain, too much rain, or unexpected weather conditions. Here are four keys that helped livestock producers deal with these challenges and maintain a successful forage program.

Flexibility: Be flexible in your management strategy when dealing with constantly changing conditions. An unwillingness to change or adapt plans often leads to failure.

Knowledge: No one can know everything, but you can know whom to contact for good information. This can be extremely helpful when dealing with challenges.

Attitude: Find a solution instead of just saying nothing can be done.

Here, we’ll focus on how producers in the eastern half of Texas dealt with various 2018 challenges, both successfully and unsuccessfully.

The spring of 2018 started off cool, which resulted in a delay in the growth of bermudagrass and other warm-season perennial forages. For many, this meant feeding hay for 45 to 60 days longer than they had planned.

However, most producers with cool-season annual grasses didn’t have to feed any extra hay. This was especially true for those who planted ryegrass and fertilized it in November and again in February. Fertilizing volunteer stands of ryegrass was also helpful, but not as good as the planted stands. Planting and fertilizing ryegrass consistently reduces the cost of winter feeding programs for producers across the Southeast.

But a dry summer, wet fall

Hay production was limited due to dry conditions. These dry conditions also resulted in overgrazing by many, which had lasting effects on forage production and cow body condition. Overgrazing warm-season perennial forages weakens the root system, which causes the plant to produce less forage when conditions improve.

Producers who were stocked light or sold animals to reduce stocking rates produced more hay and stockpiled forage when conditions improved. Although cattle prices were lower, the best financial strategy for many was to reduce numbers.

Some producers also applied ammonium nitrate to a portion of their fields while it was still dry. This strategy proved very effective as it allowed them to take advantage of unexpected summer rain showers. Additionally, once it started raining, it stayed too wet for many to apply fertilizer.

Consistent rainfall marked the late summer and early fall, allowing for good growth of bermudagrass and other warm-season grasses. However, with these good conditions came a massive armyworm outbreak.

Fall armyworm invasions really highlight the need to have a plan. That plan should start with owning a sprayer or making arrangements to have ready access to one. When there is a major armyworm outbreak, everyone is trying to spray at the same time.

The second part of this plan entails good scouting when conditions are favorable for an outbreak. After hatching, larvae will feed for two to three weeks before burrowing into the ground and turning into pupa. Larvae will consume over 75 percent of their total forage intake during the last few days before entering the pupa stage. Good scouting allows for spraying and treatment of an infestation before major damage occurs. Another part of this plan is to keep some insecticide on hand in case supplies become limited during an outbreak.

More times than I can count last fall, I heard someone say it cost too much to spray for fall armyworms. A combination of lambda-cyhalothrin (included to kill bigger armyworms) and diflubenzuron (an insect growth regulator to provide three to six weeks of residual control) could be sprayed for between $3.80 and $4.50 per acre.

Is it a better investment to spend $4.50 per acre on insecticide or pay $60 or more for a 1,000-pound round bale to replace the forage that was lost? Saving 1,000 pounds or more of forage per acre can quickly pay for the purchase of a sprayer and the fuel used during spraying.

After the dry summer, the wet fall was especially frustrating for some producers because fields were too wet to cut for hay. Having multiple fields that can be cut for hay or grazed is desirable because of the flexibility it allows.

When conditions don’t allow for hay production, cattle can be grazed on the “hayfield,” while another pasture that had been grazed is growing new forage to be cut when conditions improve. This results in the production of higher quality hay because it is not as mature when conditions finally do allow for haymaking. In some situations, producers were never able to cut hay because of the inability to graze those fields. As a result, valuable high-quality forage was lost.

This article appeared in the March 2019 issue of Hay & Forage Grower on page 28.

Not all hay tests are the same Next

Bale grazing gets them through winter Previous