Two herds under one heartbeat

Flowing through Paducah, Ky., the Ohio River takes a northwest trajectory. It then changes course to the southwest, forming an arch, before meeting up with the Mississippi River. Tucked just below the top of the river’s arch is Dogwood Farm, operated by Toby and Debby Dulworth.

Visiting with the Dulworths is an experience; they offer both education from a lifetime of trials and errors along with a healthy dose of philosophy on cattle and the forages they consume. Early in my visit to the farm, the couple’s love for each other, their cattle, and the land was self-evident.

Most all of the Dulworths’ neighbors grow row crops. Dogwood Farm, on the other hand, is home to 154 Hereford mother cows and their offspring, which graze a smorgasbord of forage species.

The herd is split, mostly by age, and is grazed at two separate locations. Debby oversees the home herd of younger cows while Toby commands the older cows on the farm where he grew up, about a mile away. It’s the rural equivalent of having his and her towels. Even with the split responsibilities, the two herds are managed with one heartbeat from the standpoint of performance, forage preference, and a desirable end result. 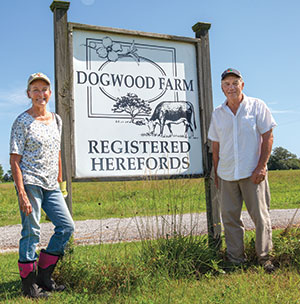 Debby and Toby Dulworth are not afraid to try new forage species on their farm. “We value diversity,” Toby said.

Toby is a fourth-generation farmer. His father farmed row crops and raised hogs. Before that, the home farm was a diversified tobacco-growing operation.

“As a kid, I saved money from mowing lawns and harvesting tobacco,” Toby said. “When I was 14 years old, I bought a yearling Hereford bred heifer and then two more aged cows with calves at side the next year. The current herd has basically grown from those initial purchases,” he explained.

Toby went to college at the University of Kentucky and got an English degree. He then taught high school English for 27 years, but they were not consecutive. In 1977, Toby’s father had a heart attack and there was a crop in the field to be harvested. Toby quit teaching and took over the farm. The 1980s were tough years for row-crop farming, and in 1989 Toby went back to the classroom.

In 2000, their hired man quit so the Dulworths gradually phased out of row crops and began seeding the whole farm to grass. Debby said, “By 2014, all of the land north and south of our house was pasture.” Debby, who also has a degree in English, was the one who stayed at home and took care of the cattle and the couple’s children.

“For Debby’s sake, we had to pay a lot of attention to birth weight and conformation so heifers could calve without assistance, which affected the kind of cattle we could raise to some extent,” said Toby, who retired from teaching three years ago.

These days, Dogwood Farm consists of about 600 acres, of which 100 are rented. About 300 acres are planted in forage crops.

“I am no agronomist, nor am I an animal scientist, but I do know from long and extensive experimentation, observation, and boots-on-the-ground experience a great deal about what works well here and what does not,” Debby said.

If you plan to spend a morning with Debby, as I did, you can easily believe her boots-on-the-ground experience. Along with Toby, we did the equivalent of a pasture half marathon that was filled with observations, anecdotes, and critical forage analysis.

“We value forage diversity,” Toby said. “Debby reads about various forage alternatives and then we give them a try. It’s the only way to know if it works for your operation. However, we let the universities test the really risky stuff first,” he chuckled.

Like many Kentucky grazing farms, much of the Dulworth acreage was originally infested with toxic tall fescue. “We’ve made a conscious decision to minimize the effects of fescue,” Toby said. “It’s taken a lot of years to make that a reality.”

Early on, the Dulworths planted some endophyte-free tall fescue, but it didn’t persist. Since then, they’ve seeded several different novel-endophyte varieties and have had much better success.

“We try to use fescue when it’s at its best — during the winter and early spring,” Debby noted. “We seed improved crabgrasses into the fescue stands to try to dilute it. Cattle much prefer crabgrass over fescue during the summer,” she added. 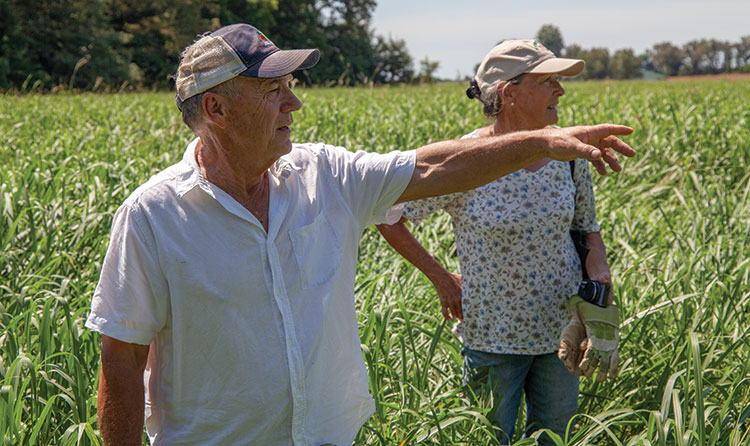 The Dulworths have been extremely pleased with this over 20-year-old stand of eastern gamagrass used for both hay and grazing.

Dulworths also have some perennial ryegrass paddocks that their cattle graze each spring. They’ve had the best luck with the Remington variety. Once the ryegrass plays out, those paddocks are seeded to crabgrass for summer production. The ryegrass stands generally persist for two to three years before they need to be reseeded.

The cool-season pastures, which were once dominated by tall fescue, are now mostly orchardgrass but also include some timothy and lots of red clover. White clover and a little alfalfa are also present in the diversified mixture of pasture species. Dulworths haven’t found the need to apply any commercial fertilizer to their pastures, relying heavily on mixed legumes and manure from management-intensive grazing.

In the fall, some pastures are left to grow and be stockpiled. This allows for grazing to occur as late as January. In a typical year, they will feed hay for 60 to 90 days during the winter. Round bales, which they make themselves from excess spring pasture or designated hay fields, are fed in bale rings that are moved around to help distribute manure nutrients. Little to no grain supplementation is done, though soybean hulls are used to keep condition on bulls during the winter.

“We tried baleage one year but really had a problem with raccoons tearing up the plastic,” Toby noted.

See a future for C4s

The Dulworths are big believers in the value of warm-season, or C4, grasses.

“We can cut or graze Quick-N-Big crabgrass a couple of times each year and then let it go to seed in late summer,” Toby said. “Crabgrass just keeps on giving. Over the years, we’ve tried about everything — from grazing corn to sudangrass to teffgrass. On fields that produced only corn, wheat, and soybeans for the past four to six decades, the forages that grow best here in the summer are johnsongrass and crabgrass, and the cows like both of them,” he added.

“In the future, we’ll need more C4 grasses in the Southeast as our climate changes,” Debby prophesied. “We encourage johnsongrass in our fescue . . . it’s a gift from God that helps dilute the fescue.”

Debby really gets excited when she walks their weed-free field of perennial eastern gamagrass, a warm-season grass that is starting to receive more notoriety in the mid-South. “We seeded this field over 20 years ago,” Debby said. “This year (2018), the cattle grazed and heavily manured it for a couple of days in early May. Toby took a hay cutting on July 7. The gamagrass was waist-high, just beginning to head out. It yielded over 5 tons per acre, and we will get another cutting before fall.”

Though she admits that annual forages have their place and utility, Debby prefers perennials as the farm’s forage foundation. “It takes some patience to get gamagrass fully established, but once it is, the production and need for little maintenance are hard to beat,” she said.

Though perennials are Dulworths’ “go to” forage source, this past summer they collaborated with Chris Teutsch, University of Kentucky Extension forage specialist, to establish large field plots of about a dozen different summer annual forage options, including mixtures and monocultures. These plots highlighted a forage tour and field day that was held at Dogwood Farm in August.

“Corn is for hogs; cattle eat grass,” said Toby of something his father once told him. “That was instilled in me very early on. It’s matching the cattle to the grass that’s the challenge,” he added.

The Dulworths have always preferred Herefords because of their gentle nature and being so easy to work with, especially in a grass-based system.

“We did have to change our genetics when we went to an all-grass farm,” Toby explained. “Growing cattle for the feedlot is a lot different, and it’s hard to find grass-adapted cattle. We needed smaller cattle but not too small, which we tried for a period as well. Medium-sized frames seem to work the best here, but after all these years the herd is still a work in progress,” he added. 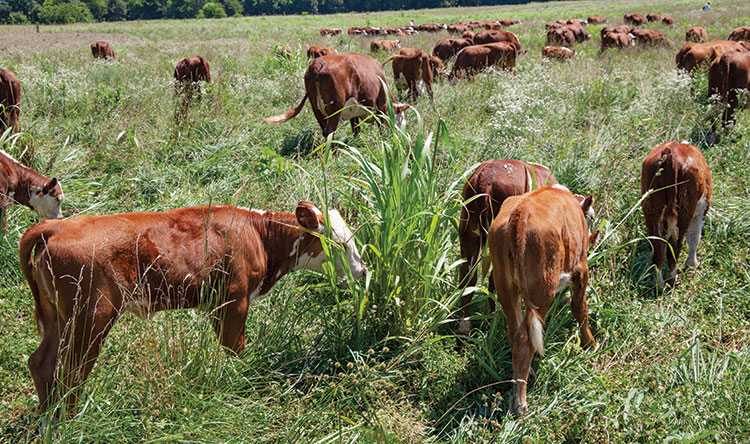 “It’s a gift from God,” said Debby Dulworth about the johnsongrass that dots their pastures.

The heifer calves wean at about 475 pounds and steers average about 525 pounds. In 2003, Debby started direct-marketing some of their beef, which really helped improve the farm’s bottom line. Toby explained that the current marketing approach is three-pronged.

“There’s a big demand for Hereford heifers to breed to black bulls, so that’s one commercial avenue we take,” Toby said. “We also sell purebred Hereford bulls for breeding, and then we sell steers as custom freezer beef to individuals.”

Even with a lifetime of experience and an exceptional understanding of their land, the forages that grow there, and the cattle that graze it, the Dulworths continually strive to learn. Debby, who maintains a daily journal of her observations and the farm’s activities, puts it this way:

“Our philosophy over these past five decades has been this: If a forage cannot survive here without coddling, or if it cannot serve a good specific purpose as an annual, it has little reason to be here. When selecting breeding stock from among our cattle, a similar maxim holds true. In both cases, forages and foragers alike, we favor survivors with disease resistance; soundness and longevity; quality; the ability to endure, reproduce, or reseed successfully; and the ability to persist and thrive year after year with little interference or extra aid from us. The forages must sustain and nourish the cattle, and the cattle must nourish and help sustain the forages.”

A lifelong learner and teacher of grazing Next

Sonar helps him be a better grazier Previous