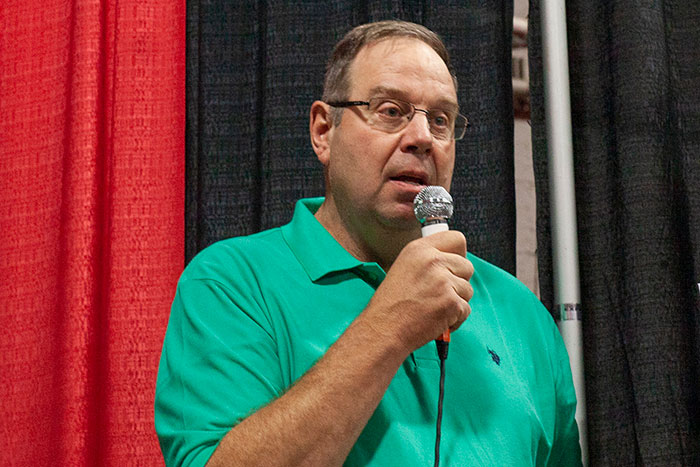 Don and Nancy Hasselquist sold their dairy herd back in the mid-2000s; however, that wasn’t the end of their haymaking days.

“I wanted to keep my heifers and raise hay on the erodible ground, but I also wanted a simple hay and grain ration,” explained Hasselquist from the Dairy Forage Seminar Stage at World Dairy Expo. “I didn’t want to chop haylage. My nutritionist told me it should work fine, but he suggested to put some grass in with the alfalfa to lower the protein.”

These days, Hasselquist still raises dairy heifers, and he’s still driven to make high-quality baleage and dry hay, although some might consider a few of his methods to be a bit unconventional.

“I’m usually not the first one to cut in the neighborhood, but I’m not far behind,” Hasselquist said. That’s a pretty unique statement coming from someone who only feeds dairy heifers.

“My goal is to raise as much 150 to 160 relative forage quality (RFQ) forage as possible and get lots of it per acre,” the northwest Wisconsin forage producer explained. “One of the first things I did after selling the cows was to buy a hay probe. That way I could test everything and know what I have.”

Prior to four or five years ago, Hasselquist made all dry hay. Then he started making some baleage. “That was an absolute godsend,” he said.

Hasselquist has fields of various combinations of alfalfa and grass, some containing very little grass and others where grasses comprise most of the stand. His species of choice is orchardgrass, although he has also experimented with meadow fescue.

“I’m less concerned about the composition of the stand than I am about making hay that’s in that 150 to 160 RFQ range,” said Hasselquist.

Hasselquest has a rather unconventional means of establishing his alfalfa-grass mixtures. First, he seeds Roundup Ready alfalfa varieties without any grass. “I get my best pure stands this way as the seedlings don’t have to compete with a companion crop or weeds,” he said.

In the fall of the seeding year, or the following spring, he takes his grain drill and interseeds orchardgrass into the established alfalfa. Hasselquist explained, “You have to be patient because it takes time for that orchardgrass to establish. It usually takes a full year.”

Recently, the heifer grower has started using HarvXtra alfalfa varieties. “In my book, it pays back every time you cut,” Hasselquist said. “I bought it the first year I could get a bag. I pulled samples on every cutting and it quickly made a believer out of me. It’s not perfect, but it’s nice to have a cushion in the event of bad weather.”

Hasselquist cuts his fields on a 28- to 30-day schedule, but he’s not afraid to go earlier if the weather forecast is favorable. Conversely, if at 30 days it’s supposed to rain, he’ll hold off. “I have a hard time having cut hay rained on,” he mused.

Potassium, sulfur, and boron fertilizer are applied in the spring of the year, then another application is made later in the growing season.

Hasselquist’s grass stands are fertilized between every cutting. He puts on 30 to 35 pounds of actual nitrogen along with some sulfur, which is applied as ammonium sulfate.

Surprisingly, even though Hasselquist farms in northern Wisconsin and has mixed stands of alfalfa and grass, he noted that he still has to be vigilant about controlling both alfalfa weevils and potato leafhoppers.

All of his first crop hay is cut and wrapped as baleage. Second through fourth crops are harvested as dry hay, if possible.

Hasselquist speaks highly of using a tedder because it both speeds drying and promotes uniform drying throughout the field. He teds a lot of hay between 6 and 8 a.m. and 9 and 10 p.m. “There’s an art to it,” he said in describing the use of a tedder.

“I usually have some hay that’s 180 to 190 RFQ,” Hasselquist said. “That’s what I feed when the Polar Vortex moves through, and it helps me keep my heifers growing during those periods of subzero temperatures.”

Hasselquist’s approach to baleage is also a bit out of the ordinary from the standpoint that he strives for 45 percent moisture, which is about 10 percentage units lower than what is typically recommended. In fact, Hasselquist will wrap hay down to 30 percent moisture.

“Wet baleage, over 55 percent moisture, freezes in our area,” Hasselquist explained. “I don’t expect my heifers to chew on an ice cube.”

All of Hasselquist’s production is custom baled into 3x4 large square bales and then, if needed, custom wrapped with an in-line Anderson wrapper. The inoculated bales are moved out of the field and unloaded before the custom wrapper arrives. A lot of the wrapping is done at night.

Hasselquist is not one to stay the course from the standpoint of never trying new practices. “I like to try and learn something new every year, even if it’s not on a large scale,” he explained.

In 2020, those new things will include grid sampling his hay fields, doing more plant tissue testing, and weighing more of his bales to get a better handle on forage yields.

“Recently, on one contour field, I tried broadcasting alfalfa seed with fertilizer and then rolling it in,” Hasselquist said. “We got rain right away and had good success. It’s something I might try again.”

One thing that didn’t work one year was when he went out and mowed a small test strip of alfalfa in mid-September to see if it impacted winter survival. “I’ll never do that again,” Hasselquist exclaimed. “There were clearly fewer plants where I cut.” He added, “I only cut in October if it’s a young stand, and even then, only if I need the hay pretty bad."

As a past winner and frequent high finisher in the World Forage Analysis Superbowl, Hasselquist continues his quest for high yields of quality forage with a laser focus on obtaining 150 to 160 RFQ. Though some of his practices might be viewed as unconventional, his results certainly can’t be disputed.

Weeds are not created equal Next