Weeds are not created equal 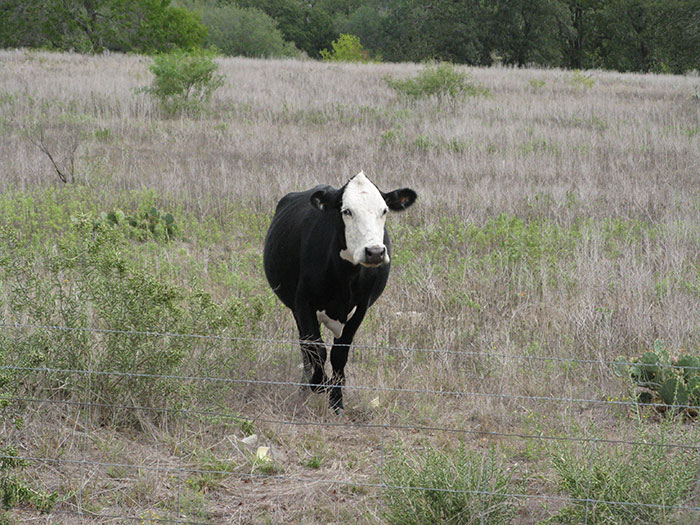 The commonly accepted definition of a weed among academia and other professional vegetation managers is a plant out of place. In this definition, weeds can be grasses, broadleaf plants, forbs, woody plants, sedges, or rushes.

Many producers use the term “weeds” to designate forbs, which are defined by botanists as herbaceous flowering plants that are not a grass, sedge, or rush. A suitable definition of a weed for a range or pasture manager is a broadleaf, herbaceous plant that negatively affects management objectives. The latter is a good definition because certain forbs, depending upon their densities, may not jeopardize the management plan.

Approximately 81% of a cow’s diet is grass, so if cattle are the primary enterprise, a large population of forbs could cause a problem by crowding out grass. Whitetail deer prefer a diet of 36% forbs, 52% browse (woody plants), and only 12% grass. If deer are part of the management plan, certain forb species are beneficial. Some forb species provide cover and safety for ground nesting birds, which gives them value if birds are desired. Even if grass production is the primary objective, a minor population of forbs is not always detrimental.

There needs to be a potential economic benefit from killing weeds. Forb susceptibility to herbicides varies greatly, and the ability to identify different plant species and understand their growth characteristics enables a manager to control the right weeds with the appropriate product. Once problem weeds are identified, consult weed control recommendation bulletins issued by agricultural universities for expected control with different herbicides. Product labels also list weeds controlled by that particular herbicide.

Table 1 lists some Western weeds that are controlled by 2,4-D alone as well as by other herbicides, according to Texas A&M AgriLife Extension. A very old product, 2,4-D was first sold in 1946 and is very cost-effective. Weed control for those species listed in Table 1 is rated very high with a range of 76% to 100% of the plants killed. To broaden the weed control spectrum, as well as enhance the amount of control, 2,4-D is often mixed with other herbicides such as dicamba (Banvel), picloram (Tordon), and aminopyralid (Milestone) either in the spray tank or as a product formulation. 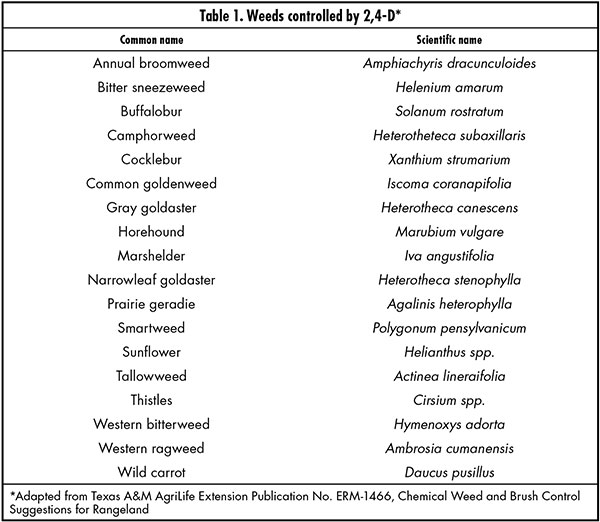 It is important to consult herbicide recommendations for your state or region because common names for the same plant can vary across the country. Latin names for the plants are also listed in Table 1 because this nomenclature is common around the world. It is important to pay attention to all the information listed with herbicide recommendations such as application rates, spray volumes, application times, and other pertinent remarks. Efficacy and economics are jeopardized when herbicides are applied improperly.

Western plants listed in Table 2 are not normally controlled by 2,4-D alone and require a different herbicide approach such as picloram, dicamba, metsulfuron (Cimarron), tebuthiuron (Spike), and triclopyr (Remedy Ultra). These herbicides are either used alone or mixed with other herbicides. 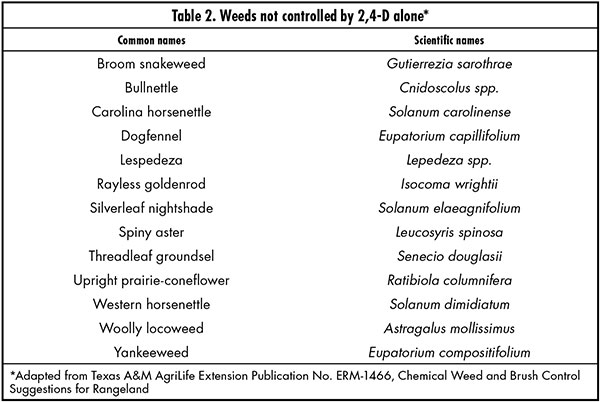 Weed species differ in susceptibility to herbicides because they are not created equally. One of the goals in herbicide application is to halt reproduction of unwanted plants. Some plants are annuals that depend upon seed for reproduction, while others are perennials that produce new growth from their root systems in addition to seed. Annuals are usually more easily controlled than perennials.

Some forbs have layers of wax on their leaves and/or pubescence (hair) that retard herbicide entry into the plant. Root system size and carbohydrate storage varies among weeds, which affects herbicide effectiveness.

Range and pasture managers commonly encounter weeds that are resistant to all marketed herbicides. Help is on the way, however. Corteva Agriscience has developed a new herbicide called DuraCor for which an EPA registration is expected in time for the 2020 spray season. DuraCor contains a new active ingredient called florpyrauxifen-methyl (trademarked as Rinskor) that has proven to improve control of several hard-to-kill weeds. An example is Western ironweed (Vernonia baldwinii), also known as Baldwin’s ironweed.

As described by the Missouri Department of Conservation, “Ironweed belongs to the same plant family as daisies and sunflowers. They are tough, grayish green, branching perennials known for their fluffy-looking clusters of reddish-purple florets in numerous flowerheads. The plant blooms in May through September. The leaves are hairy, sharply pointed at both ends, and positioned on short stems. Western ironweed grows to a height of 4 to 5 feet.”

The geographical range of Western ironweed is across the Midwestern and mid-South states, reaching as far west as South Dakota and Texas. The species prefers disturbed sites, open woodlands, and fields. Weed response ratings for pasture and range herbicides in Oklahoma published by Oklahoma State University show approximately 80% control of Western ironweed with Tordon (picloram). Other herbicides evaluated on Western ironweed provided 70% or less control.

DuraCor was compared to GrazonNext HL (aminopyralid + 2,4-D) in field trials across much of the United States over several years. When Western ironweed was sprayed early in the season, GrazonNext HL herbicide provided 91% control and DuraCor gave 95% control. In late season spraying, GrazonNext controlled 78% of the plants and DuraCor killed 93%. The results are averages across all trials.

Buckhorn plantain, also known as English plantain, is an erect cool-season perennial. “The plant often acts like an annual herb with green and grass-like seed leaves,” said Trevor Israel, a former extension assistant at the University of Tennessee who is currently a field market development specialist with Valent U.S.A. “Older leaves form a basal rosette and may be smooth or pubescent. Stems are erect, up to 2-feet tall and topped with tiny white to brown flowers. Fruits are an ellipsoidal capsule, each containing two seeds that are black and boat shaped. Roots are slender and fibrous from a taproot.” 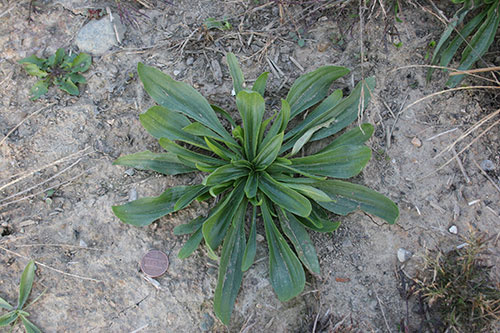 “Broadleaf plantain is a perennial plant that grows best in moist areas with full sun or partial shade and compacted soil; its fibrous root system is primarily found in the top 18 inches of soil,” said C.L. Elmore, weed scientist emeritus with the University of California Davis. “The smooth, oval leaf blades are 2 to 6 inches in length with five to seven ribs parallel to the leaf margins. Seeds are small, reddish brown, and angular. The upright flowering stalk terminates in a long, cylindrical spike.”

The two species are found throughout the United States and can increase in density over time, competing with desirable forages. They are fairly resistant to currently available herbicides. In the field trials sponsored by Corteva, GrazonNext HL herbicide provided 10% control of both species. Applications of DuraCor herbicide resulted in 100% control of buckhorn plantain and 70% of broadleaf plantain.

The author is a freelance writer based in Georgetown, Texas.

Wet years have favored weeds Next