His is the land of misfit cows 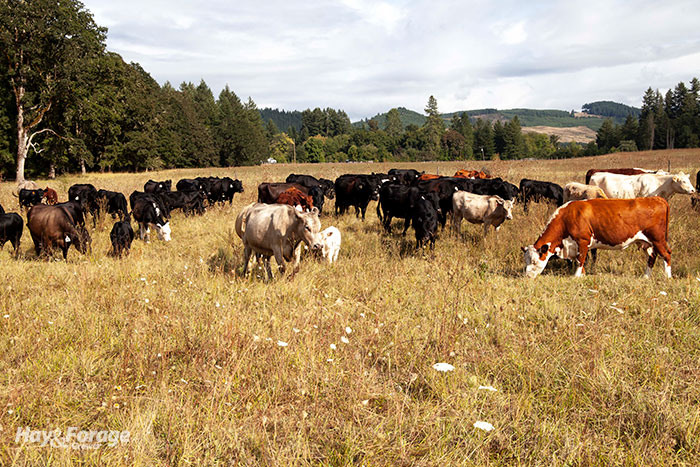 John Marble readily admits that there is almost nothing about his beef grazing operation that is normal. “We just do things differently than most people,” said the Crawfordsville, Ore., rancher. “The cow deal for us looks a little unusual.”

Marble spends countless hours at the auction barn during the late winter buying about 100 cows to graze his native mixed-grass pastures in the Willamette Valley. Most of the cows are purchased one at a time, and they aren’t the type of cattle that a typical cow-calf producer would even give a second look.

Rather, Marble is bidding against the hamburger buyers. “It’s highly competitive,” he said. “I’m looking for cattle that I can put on grass and add value. Sometimes they’ve got a calf at their side, and some are pregnant; others just need to be fed. I’ll even buy cutter bulls.”

To use a house analogy, Marble buys fixer-uppers, and then runs a stocker operation with adult cattle.

In addition to his misfit cow enterprise, Marble also has several clients who send him replacement heifers or cows to custom graze.

Marble aims to add value to those “hamburger” cows that few other ranchers care to look at.

Many twists and turns

Marble grew up on a small ranch near his current location. His dad had an off-farm job that kept the 50-cow operation viable. “There was no business structure, and it was a high-overhead, high-labor operation,” he recalled. “I had no idea of the economics; we just worked and had a blast growing up.”

After going to college and getting a degree in biology, Marble worked at a USDA research facility in Oregon for a while, then he returned home and worked for an implement dealer. He got the chance to purchase the ranch next to his parent’s property in 1983.

“I still didn’t have a good grasp on the business of ranching,” he said. “We struggled for a few years, then I went to my first Ranching for Profit school. That was the turning point for me. I came home and made wholesale changes.”

Today, Marble’s operation consists of about 500 acres of grazeable land with about 75% of that being rented. His home property of about 20 acres is what he calls his experimental farm. “This is where we try things to see if they work, then transition them to our other acres,” he said.

Winters in the Willamette Valley are wet, but Marble knows that around mid-June of each year the spigot will shut off and largely stay that way for about 100 days. That doesn’t bode well for grass growth, and this is where a high level of grazing management is needed.

“I like to use cell grazing, which is a form of managed grazing,” Marble explained. “Essentially, each property is a cell, but the number of paddocks per cell differs with the size of the property and its proximity to home. Those that are farther away, I want less frequent movement of cattle. However, I also want to physically see every paddock at least once per week,” he added. 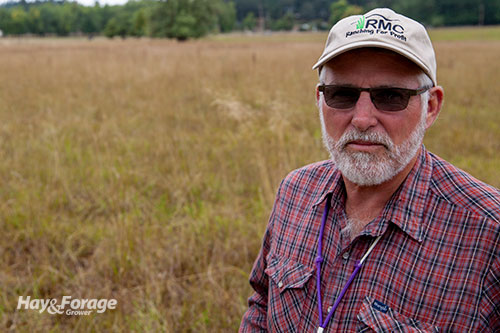 “The only inputs I have are water, sunshine, and management,” said Oregon rancher John Marble. Water, in the form of rain, is a rare occurrence for most of the summer.

Marble’s pastures are of varying quality, and he always tries to maintain a high residual. With no irrigation, a lot of the pastures turn brown during the summer months. He does use polywire to split paddocks, but generally only when he has a group of cows with lower nutrient requirements.

“We can usually get cattle on grass about April 1, but we manage conservatively in the fall,” Marble said. “We’ll feed some hay to cattle that are bought before the grass is ready to graze, but once they’re on grass, no hay or supplements are fed other than minerals.

“Once the cattle are on pasture, the vast majority of my focus is on the grass, not the cows. We spend most of our time tracking the grass, looking at grass, and thinking about the grass.”

Marble continued, “Our pastures won’t win too many beauty contests, but I like to think they are highly managed. The only inputs I have are water, sunshine, and management. We don’t fertilize, irrigate, or mow, but we will spot spray to control invasive toxic plants.” A 30-horsepower tractor makes up Marble’s entire equipment line.

“Our intention is to be a seasonal grazing operation,” Marble noted. “We don’t want any cattle at all in the winter. It’s so wet here that the economics of overwintering cows is not very good.”

Marble will own cattle anywhere from 30 to 200 days, so there’s some marketing that goes on throughout the grazing season. The goal is to have the animals gone by Thanksgiving. He likes to make direct sales, sometimes packaging groups of cows or calves.

“Marketing is a real challenge in western Oregon,” Marble said. “We’re in a soft environment, making it difficult to sell animals outside of the region, and the number of beef producers is declining here.”

Making the most of native grass pastures that haven’t been farmed for decades, Marble has carved his own value-added niche. In a situation where summer rains annually practice social distancing, this Oregon rancher has adopted a successful business model where one person’s junk truly becomes another person’s treasure.

Jousting with the snout beetle Next