Jousting with the snout beetle 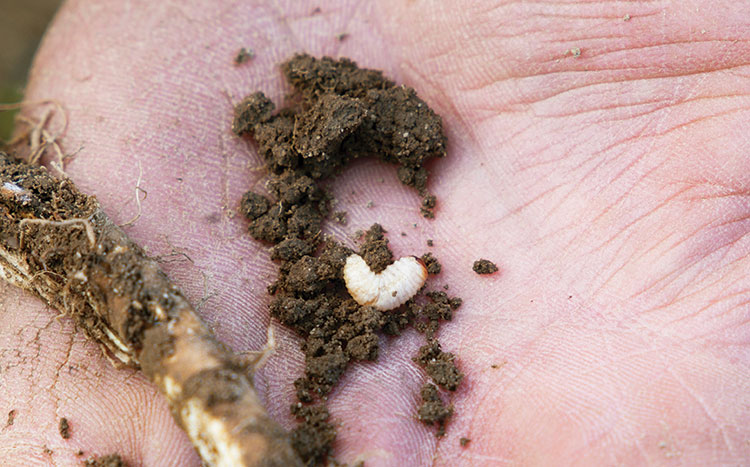 Standing outside the east end of Bruce Dimock’s freestall barn, you can look out over a stretch of about 5 miles and view the waters of Lake Champlain. Dimock’s dairy farm is located in the northern reaches of New York state, nearly surrounded by the Adirondack Mountains.

They call this area the North Country, and it’s here that three generations of Dimocks milk 320 high-producing Holsteins and farm 690 acres. Bruce’s parents, Don and Martha, who still help on the farm, bought the place in 1971. It’s a unique environment to raise forage crops; in fact, so unique that farmers in the region can claim their own alfalfa insect pest — the alfalfa snout beetle.

Virtually all of the crop acres on Dimock Farms are harvested for forage. “We have outgrown our acres,” Dimock noted. “So, we’ve had to implement some double-crop strategies and be a little creative. This makes us more risk averse in the event we have some alfalfa winterkill.”

In essence, a lot of crop decisions made by Dimock somehow circle back to limiting the impact of the alfalfa snout beetle.

The alfalfa snout beetle was first recognized as a problem in alfalfa during the early 1930s. These days, you can find the beetle infesting alfalfa fields in portions of nine northern New York counties and small areas of Ontario, Canada.

Snout beetle adults are mottled gray, about 1/2-inch long, and don’t fly. They lay eggs from late May to early June below the soil surface in alfalfa fields. Once hatched, the small larvae begin feeding on alfalfa roots, moving from laterals to the taproot and growing in size. Come winter, the large grubs overwinter in the soil. During the following year, the grubs will pupate, and the adult emerges but remains in the soil until the following spring, starting the cycle over again.

Elson Shields has dedicated a majority of his long career to finding a means that will hold the alfalfa snout beetle to subeconomic levels. In the 1990s, the Cornell University entomologist finally hit on the discovery of insect-attacking nematodes that prey on snout beetle larvae; it was learned early on that insecticides were ineffective.

After years of trial and error, a system is now in place whereby farmers and ag crop input providers can purchase and apply biocontrol nematodes to infected alfalfa fields. According to Shields, about 25,000 acres of cropland have now been inoculated with the nematodes, and the number continues to rise by about 2,500 to 3,000 acres each year. The total land base infested with snout beetle is about 500,000 acres.

“When fields are inoculated a single time with biocontrol nematodes, the snout beetle disappears as an economic pest within a couple of years,” Shields said. “Stand life more than doubles. Once a field is inoculated, the nematodes are persistent through the alfalfa and corn rotation where they also can reduce corn rootworm densities. Then, they are still there when alfalfa is rotated back into the field,” he added.

Biocontrol nematodes move about 3 feet per year on their own but will move with any movement of soil on the farm. A single tillage pass will move them 100 yards or more. Alfalfa snout beetles are moved by any equipment that moves soil. “Alone, they can walk a couple of miles looking for new fields,” Shields said.

Dimock has been inoculating his fields with nematodes for the past seven years. “It’s a slow process,” he said. “We’ve gotten quite good at seeing signs of damage. You start to see yellow leaves late in the growing season, then I take my shovel out in the field and start digging plants. The taproot of a damaged plant looks like someone took a small ice cream scoop to it. In severe cases, the taproot will be eaten to a nub,” he added.

Dimock continued, “In the fall, you can watch to see where the crows congregate in alfalfa fields. They like the larvae and will pull damaged plants right out of the ground. That continues through winter.”

The Empire State dairyman purchases his nematodes from Mary DeBeer. DeBeer was trained on how to raise the nematodes and works with her father, Ron, at DeBeer Seeds and Spraying in Moira, N.Y. Dimock built his own dribble spray rig that he mounts on a Gator to make his applications.

Dimock introduces the nematodes to his fields right after the first cutting of a new seeding. This needs to be done on a cloudy day, late in the day, or right before a rain to prevent the nematodes from being exposed to too much ultraviolet sunlight, which can kill them. Once applied to the soil, they will remain there indefinitely.

Dimock doesn’t spend much time pouring through alfalfa variety seed catalogues. “We really have gotten to the point where we only plant one variety,” he said.

That variety is Seedway 9558SBR, which was originally developed and released by Cornell University after plant breeders started making selections for snout beetle tolerance in 2003 and went to market 10 years later after seven cycles of selection.

The unique variety has a branching taproot and is well-adapted to the northern New York environment. Even when planted, however, it has to be done in concert with nematode applications for best results because the level of resistance in the variety to snout beetle is only moderate. Work continues by Cornell plant breeders to improve the levels of resistance. According to Shields, the current experimental selections offer much improved snout beetle tolerance.

A focus on forage 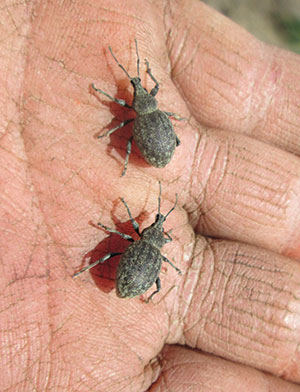 Alfalfa snout beetle adults lay their eggs from late-May to early June.
Although the alfalfa snout beetle is always on his mind, Dimock is also laser-focused on his overall forage program. Along with his wife, Mary, and son, Sam, their goal is to harvest top-quality forage in many different forms.

“The better the feed that we can grow, the less we have to buy,” Dimock said of the fact that all grain and premixes are purchased. He samples and analyzes all of his forages as they go into storage and again as they’re being fed. Meticulous crop records are kept of all inventories, including what is stored in each of his seven bunker silos (plus one pile) from the perspective of harvest dates and hybrids or varieties.

A tough alfalfa winterkill year in 2019 forced Dimock to reduce alfalfa in his dairy ration from 40% to 30% of the dry matter forage being fed. “We put in 130 acres of new alfalfa seedings last spring instead of our usual 60 acres,” Dimock said. “Among other things, snout beetle damage predisposes alfalfa to winterkill. To help offset the winterkill situation, we planted a field to brown midrib sorghum-sudangrass, which we were really happy with.”

Dimock establishes alfalfa using an oat-pea mixture as a companion crop. Like most Northeast dairymen, he seeds an alfalfa-grass mix, using a late-maturing orchardgrass, fescue, or reed canarygrass as the grass component.

Alfalfa is cut three or four times a year, usually taking a first cutting around May 20. He normally gets two good alfalfa production years following the seeding year, then the third year is mostly grass production because of the snout beetle issue. Dimock also has to spray for potato leafhoppers but does not generally have a problem with alfalfa weevils, being in far northern N.Y.

Hayfields are cut and laid into a wide swath. Most of it is chopped, but Dimock still makes about 5,000 small square bales each year, which are used for calves and sick cows. “I really like those later cuttings of orchardgrass for dry hay,” he noted.

Dimock harvests the dry bales using the Steffen hay system and moves bales with grapples. In addition, grass hay is chopped dry and stored in the commodity shed, where it used as a fiber source in the dairy ration as needed. Forty acres of monoculture reed canarygrass is also harvested for dry cow feed. Mary and Bruce Dimock have been inoculating their alfalfa fields with biocontrol nematodes for the past seven years.

Alfalfa fields are rotated to corn for four to five years. Dimock has both sandy soils and heavier loam soils. It’s during the corn years of the rotation that he will plant winter rye on his sandier ground to help build organic matter and boost forage inventories.

“We grow 90- to 100-day hybrids with high digestibility,” Dimock explained. “About one-third of the acreage is brown midrib (BM1), which is stored in a separate bunker and fed only to the high-producing cows and close-up dry cows.”

Dimock will no-till corn in 30-inch rows on his sandier acres. “We’ve had really good performance from Pioneer’s AQUAmax trait on our more drought-prone, sandy soils,” he noted. “We are also one of the few farms in the area that still cultivates and, at the same time, incorporates liquid nitrogen fertilizer. We use a presidedress nitrogen test to determine appropriate rates.”

Corn silage yields for Dimock range from 18 to 22 tons per acre at around 63% moisture. His feed consultant monitors kernel processing (KP) scores throughout harvest. He usually is able to achieve KP scores in the upper 80s. Dimock uses a Lactobacillus buchneri inoculant on the BM1 corn silage because it gets fed out slower, making it more prone to aerobic spoilage. Other corn silage and his alfalfa haylage gets inoculated with a homofermentative lactic acid inoculant.

“With a shorter growing season and the alfalfa snout beetle, I guess we have our unique challenges here,” Dimock said. “Of course, every farmer has burdens to bear and overcome. We are really fortunate to have excellent nutritional consultants and crop advisers from Champlain Valley Agronomics, and we try to take full advantage of their expertise. We also have the Miner Research Institute not far away. That facility and its people are a gold mine of information.”

The alfalfa snout beetle will continue be a challenge for Dimock, but because of the dogged persistence of one Cornell entomologist, a grub-loving nematode, and the cooperation of farmers and ag retailers in the region, its impact on alfalfa production declines with each passing year. 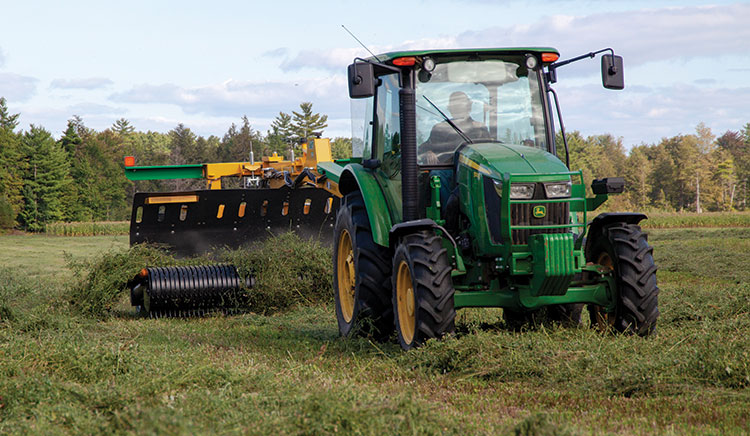 Mary Dimock merges one of the farm’s alfalfa fields.
“The better feed we can grow, the less we have to buy,” Bruce noted.

This article appeared in the April/May 2020 issue of Hay & Forage Grower on page 24.

They add income with custom baleage Next

His is the land of misfit cows Previous