They add income with custom baleage 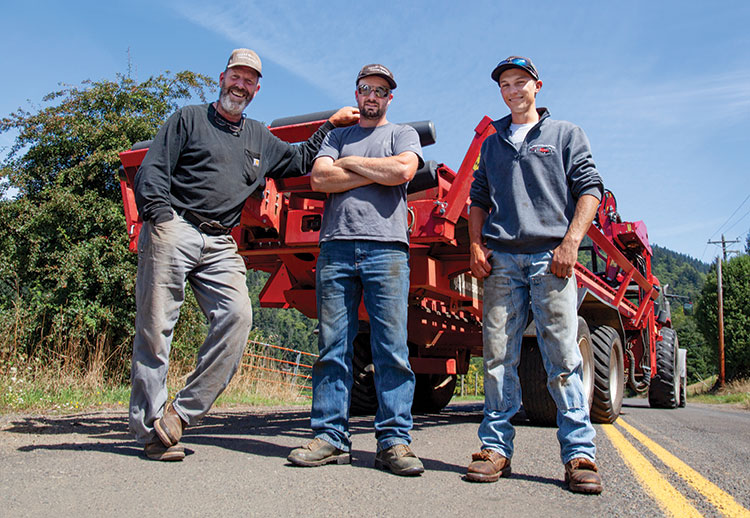 Norm (left) and Blaise (center) Bennett custom harvest about 20,000 baleage bales per year.
Isaac Johnston (right) is one of two full-time employees.
Some things just make sense. That would be the case for baleage in an area that gets nearly 90 inches of rain annually.

It’s in this situation that Norm and Blaise Bennett find themselves. The father-son duo operate a 120-cow Holstein farm in Tillamook, Ore., which is tucked neatly into the state’s Coastal Mountain Range. The entirety of their nearly 300-acre crop base of owned and rented land is devoted to grass hay. The region is simply too wet for long-term alfalfa survival.

The Bennett’s Valley Venture Farms, which was purchased by Norm’s father in 1961, is just a part of what keeps this pair busy during the growing season. They also operate a full-service custom baleage service with a client base of 35 dairies. “Although we always did a little custom work, it really started as a major enterprise in 2008,” Blaise explained. 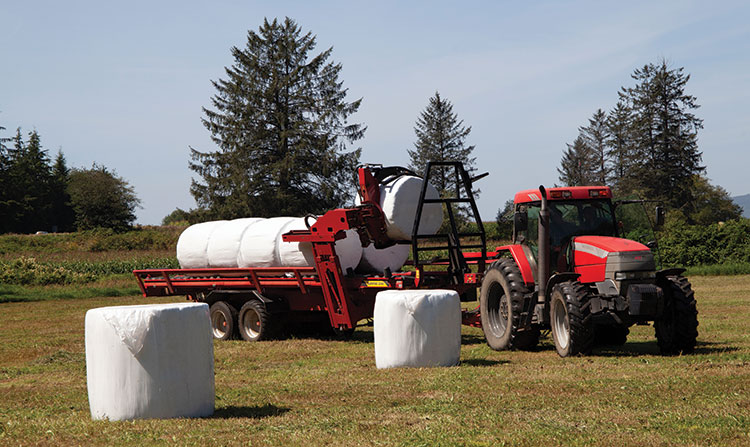 Nearly all of the fields that Bennetts custom bale and wrap consist of primarily cool-season grasses.

For the majority of their customers, the Bennetts do all of the cutting, swath manipulation, baling, and hauling. “In those early cuttings, the baling windows are usually small,” Blaise said. “Between doing our own hay and that of our customers, scheduling can be a challenge. Over time, I’ve gotten to know our customers’ wants and desires, and I’ve gotten pretty good at making it all work. I sometimes have them scheduled before they even call. Most of our customers have been in long-term relationships with us,” he added.

Getting May and June cuttings dry in this part of Oregon can be a struggle, even when the target moisture range is 55% to 65%. The Bennetts use a bacterial inoculant on all of their own baleage and for most of their customers.

“We often have to ted every day to keep the grass from going bad in the field,” Blaise said. “With the fields being predominantly grass, leaf loss is less of a concern than with a legume.”

The Bennetts run a full line of haymaking equipment. Their mower is a Kuhn GMD series, 32-foot triple mower with no conditioners. They also have two Vermeer TE330 tedders that are used for early cuttings and as needed thereafter inoculant Massey Ferguson rotary rakes are used to form windrows.

The backbone of the haymaking equipment line is two McHale Fusion 3 baler-wrapper combo units equipped with precutters. A Claas round baler, without wrapping capabilities, is used as a backup and for any dry hay that is made.

To efficiently move bales off the field, the Bennetts recently purchased an Anderson RBMPRO 2000 Bale Trailer, which gently picks up the bale and puts it on the trailer. “We always try to minimize our labor needs,” Blaise said. “Prior to this upgrade, we used squeeze attachments on our skid steer and tractor. It worked, but it took more people to get the job done.” 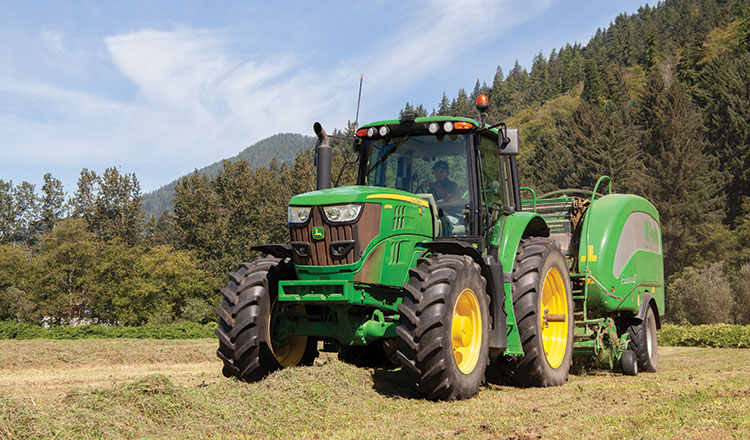 Nearly all of the fields that Bennetts custom bale and wrap consist of primarily cool-season grasses.

Operating both a dairy and a custom baling business makes for some long summer hours. The day starts at 4 a.m. with feeding and taking care of the cows on the home farm. The herd is milked with two robotic milking units that were installed in 2014 — another labor-saving investment. The Bennetts have one full-time employee for the dairy and two full-time workers for the custom baling business. There are also a couple of part-time employees.

In addition to the grass baleage that is made for the milking herd, Blaise noted that they also feed about 10 pounds of alfalfa hay per cow. The hay is purchased from a ranch in eastern Oregon where Blaise worked for one summer after high school. This is a typical feeding protocol for dairies in the Tillamook area, although there are many that chop their grass hay rather than feed baleage. The Bennetts do all of their own trucking.

Bennetts’ grass fields are primarily orchardgrass with a small amount of red clover. “We like orchardgrass because it’s easy to dry down and bale,” Blaise said. “Fields are usually reseeded about every 10 to 12 years, and we get three to five cuttings depending on whether the field is irrigated or not. Even though we get a lot of rain here, July and August can get pretty dry.”

Jousting with the snout beetle Previous