Forage stand nitrogen movement is not what you think

By John Jennings
The author is a professor and extension forage specialist with the University of Arkansas Division of Agriculture. 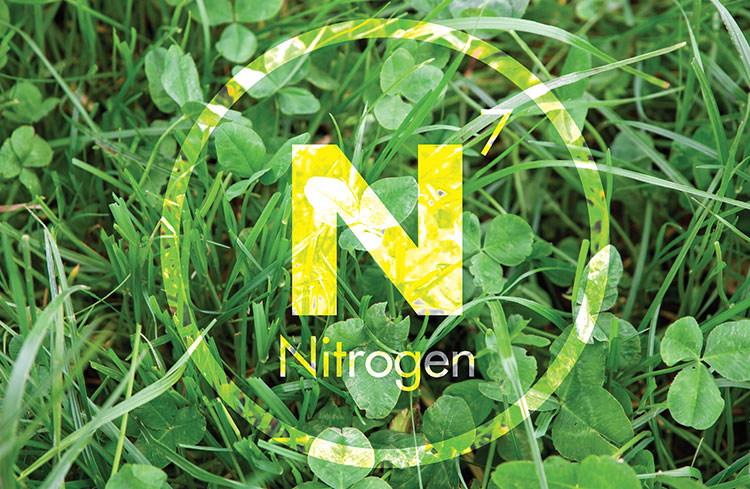 Legumes have been used as pasture and hay crops throughout history. They are high-quality forages that improve livestock weight gain, reduce fescue endophyte problems, extend the grazing season, and reduce nitrogen fertilizer inputs due to nitrogen (N) fixation. The unique association of legumes with rhizobia bacteria to fix N is an often promoted but also widely misunderstood process.

The total amount of N fixed depends on the legume species and the population in the field. The reported amount of N fixed from full stands by different legume species varies widely. For example, N fixed by hairy vetch ranges from 50 to 150 pounds per acre and for alfalfa the reported range is 128 to 250 pounds per acre (Table 1). Annual legumes such as crimson or arrowleaf clover fix N at a higher rate than perennial legumes, but longer growing seasons allow perennial legumes to fix a higher total amount of N. 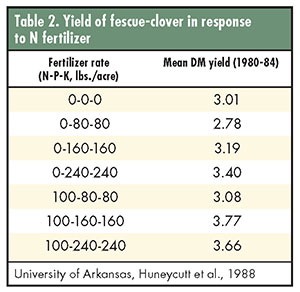 Because of the high potential amount of N available from fixation, legumes are promoted as a source of free N fertilizer. Work done in Arkansas showed that in fescue-clover stands, forage yield was similar across several fertilizer N rates (Table 2). Results like this and similar studies have led to the commonly mistaken belief that legumes fix nitrogen and release it into the soil for use by companion grasses in the mixture. However, legumes do not freely share N with grasses because doing so would create more competition that would threaten the survival of the legume plant.

Symbiotic N fixation allows legumes to grow in an N-deficient environment. Nitrogen fixation is a biologically expensive process for both the legume plant and the rhizobia bacteria responsible for N fixation. The bacteria infect the legume roots, which causes the root to form a nodule where the rhizobia live and do their work.

The rhizobia bacteria fix N from air that’s in the soil and the legume gains benefit from the fixed N. In turn, the legume provides carbohydrates and sugars from photosynthesis to the rhizobia. Each organism gains necessary nutrients from the association. Nitrogen fixation directly promotes legume growth without the need for N fertilization. Enhanced grass growth is only an indirect effect of N fixation. 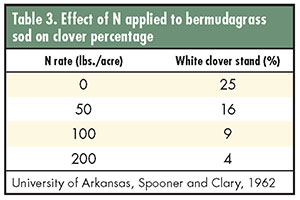 When N is applied through animal manure or fertilizer, N fixation shuts down because legumes will use free N from other sources just as grasses do. However, grasses are more competitive for N than legumes. Legumes generally have horizontally oriented leaves, whereas grasses are more vertically oriented. As grasses grow taller resulting from added N, they shade the legume plants. Heavy shade also reduces N fixation rates.

So, adding N does not have a direct negative impact on the legume plant, but the net effect is greater competition from the grasses, which crowds the legumes from the sward. A study from Arkansas showed the percent clover in a bermudagrass-clover sod dropped by half for each additional increment of N fertilizer used (Table 3).

Most is in the top growth

It is important to note that the root nodules are the factory, but not the N warehouse. Research done in Texas by Gerald Evers showed that up to 90% of the N is in the top growth of annual legumes. In perennial legumes, about 70% to 80% of the N is in the plant’s top growth. Legume top growth typically contains about 2.5% to 4% N, which equals about 50 to 80 pounds of N per ton of forage dry matter (DM).

Work done in Virginia showed that a 53% stand of red clover or 59% stand of alfalfa grown with tall fescue fixed enough N for a total DM yield of 4.7 and 5.8 tons per acre, respectively. Top growth of the legumes contained 2.8% to 2.9% N.

If the fixed N is in the plant top growth and is not freely shared with companion grasses in the stand, how does it reach grasses and other plants in the sward?

There are three primary mechanisms for N transfer. The smallest of these three pathways is through root-to-root contact and mycorrhiza fungi associations. The other two primary pathways are by plant-animal cycling through grazing and by plant decay. By far, the largest transfer pathway is cycling the plant material through grazing animals, mostly aboveground, but also by belowground herbivores.

Only a small proportional amount of the N is retained in the grazing animal’s body. Up to 80% to 90% of the ingested N is excreted in the urine and feces. About 50% of the N in the urine is lost through volatilization.

Clearly, the system is somewhat leaky and not all the fixed N is captured in the soil. Further, use of the excreted N by grasses is dependent on distribution of the excreta across the pasture. Researchers have shown that only about 14% to 22% of the pasture area is covered by this transfer annually.

In hay systems, most of the N-containing top growth is removed so a secondary transfer mechanism comes into play. The second largest pathway of N transfer after grazing is through plant decomposition. As plants are grazed or harvested for hay, roots die back resulting in sloughed nodules. Normal plant maturation and damage also results in dead crowns, leaves, and stems. These plant parts must decay by action of bacteria and fungi to release N over time.

This pathway can be a significant N source in warm-season grass systems where a grass such as bermudagrass is overseeded with annual legumes. As the annual legume matures and dies in late spring, the plant residue breaks down, releasing N for use by the warm-season grass during summer. A Texas study showed that a combination of winter annual clovers overseeded in bermudagrass yielded as much DM as bermudagrass fertilized with the equivalent of 113 to 142 pounds per acre of N. 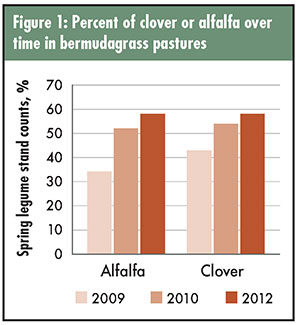 There is a lag time after planting for nodulation and N fixation to begin. This period is about three weeks after plant emergence. Nitrogen fixation is lowest during the establishment year for perennials and reaches over 90% by the second or third year.

An Arkansas study showed that the percent clover or alfalfa increased over four years when these legumes were interseeded into bermudagrass pastures. Calf body weight gain per acre tended to improve as legume percentage grew over the course of the four-year study, especially for alfalfa, but gains were generally lower in nonlegume treatments where N fertilizer was applied. Interestingly, calf gains per acre dropped drastically during a severe drought year for the N fertilizer treatments but stayed more stable across years in the legume-grass treatments (Figures 1 and 2). 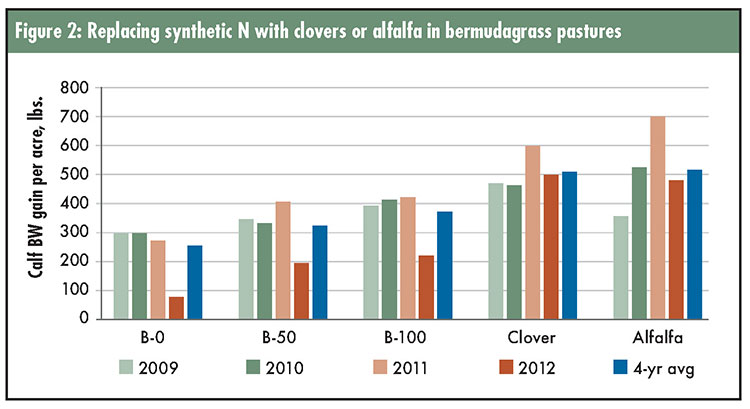 This article appeared in the April/May 2020 issue of Hay & Forage Grower on pages 6 to 8.

Forage crabgrass, Bob Dylan, and the changing times Next