Short in stature but big on success 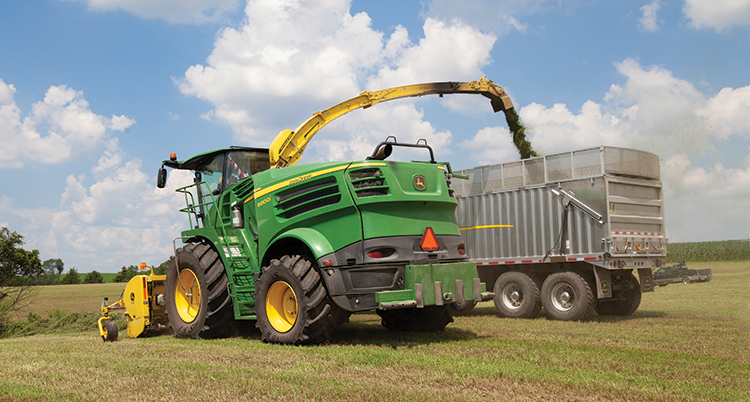 Fire up your Google machine and search for Sherrill, Iowa, making sure that it’s in satellite view mode. Pan out, and what you’ll see is a hodgepodge of hundreds of uniquely shaped small fields, which form a pattern that even the most experienced quilter would find difficult to replicate.

As the crow flies, you’ll also find the Mississippi River a little over 3 miles to the north of Sherrill, where the river takes a dogleg to the west. In this area, however, no road runs as the crow flies unless the bird is severely impaired.

It’s here — in this land of rolling hills and comparatively small farming operations — that Rusty Bahl and his family are farming and have carved out a successful custom forage harvesting business. The 5-foot, 4-inch third-generation farmer has been chopping alfalfa and corn in this region since he was 15 years old. He also feeds out 1,100 head of beef cattle each year and has 160 brood cows that are kept on various pastures throughout the area. 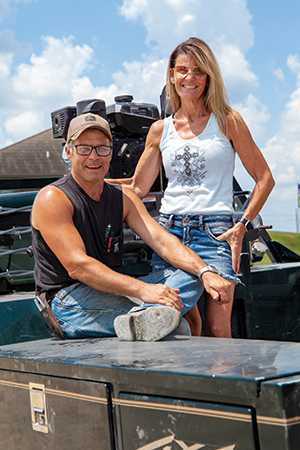 There are many long days for Rusty and Sandy Bahl, who work together to ensure both their custom harvesting business and farming operation stay profitable.
Bahl grew up on a dairy farm with two brothers and two sisters. Their father also ran a small construction and excavating business. Upon graduating from high school, one of Bahl’s brothers took over the family’s dairy. Not large enough to support two Bahl boys, the father suggested that Rusty buy the farm’s John Deere 5460 chopper and begin custom chopping.

“It was 1985 and the local custom chopper was retiring,” Bahl said. “I was just out of high school, so I contacted his clients, and they were willing to let me do their chopping. That was the start of Rusty’s Custom Chopping, and we’ve been at it ever since.”

Bahl still shares machinery with his brother, who owns all of the planting equipment and a combine. Rusty owns the forage harvesting and seeding equipment. Together, they farm about 900 acres of owned or rented land, which consists of 180 alfalfa acres with the rest being in corn. The corn is either chopped for silage or harvested as earlage, using an eight-row combine head on the forage harvester.

During those early years, Bahl began farming the family’s rented acreage and grew his custom forage harvesting business. “I chopped by myself and filled the wagons,” he explained. “In those days, most of my clients had tower silos, so we had to unload into the blower.”

After about five years of being in the custom forage harvesting business, Bahl’s dad suggested he buy a used silage bagger. That purchase helped bring more clients, and he purchased a new bagger in 1997. “That one really got used,” remembered Bahl.

The silage bagging enterprise helped the business grow, but so did a new wife, Sandy, whom he married in 2000. “She did a lot of the hauling from the field to the silo or bagger during our early years of marriage,” Bahl said. “These days, she helps with bookkeeping and coordinates with our 25 part-time employees to make sure we’re covered with enough drivers for each job.” The couple have two children, a son, Tanner (13 years old), and a daughter, Mataya (10 years old). The Bahls employ one other full-time employee.

Bahl started using straight trucks for silage hauling in 2004 and continued to upgrade his bagger. His fleet now consists of seven trucks and a self-propelled Ag-Bagger, which is equipped with an air-conditioned cab that Bahl retrofitted from a combine and rewired.

The Iowan runs wide, single tires on the trucks to alleviate compaction. If conditions get too muddy in the fall, these tires are swapped out for bar-treaded tires, which provide improved traction during corn silage harvest. In extremely wet conditions, the trucks are set up such that they can be pulled with a tractor. 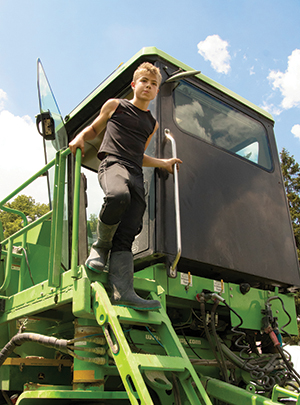 The Bahl’s son, Tanner, operates the self-propelled silage bagger at a client’s dairy farm.
Unlike many custom forage harvesting businesses, Bahl has always owned only one forage harvester, which he trades in every three to four years. To save engine hours on the machine and realize a higher trade-in value, he trailers the chopper to most jobs unless it’s close to home.

Bahl currently runs a John Deere 9900 forage harvester that he purchased last fall along with a 12-row corn cutter head. “It’s tough to find people qualified who can run machinery on these small, hilly fields, and this is a young man’s game,” Bahl noted. “I don’t even chop much anymore.”

In addition to the forage harvester, silage bagger, and trucks, Bahl’s machine shed is filled with a 32-foot Krone Big M hay mower-conditioner, a 30-foot Oxbo hay merger, a round baler, and a silage push tractor and blade for bunker silo jobs.

Although Bahl no longer logs many hours in the chopper cab, he keeps an eagle eye out for potential mechanical issues. “My job is to keep everything running and prevent any problems before they occur,” Bahl said. “I’ve always had a good ear and eye for identifying a small problem that could turn into a bigger one. My other major concern and responsibility during a job is to ensure employee safety. This is dangerous work, and somebody has to make sure everyone returns home safe at the end of the day,” he added.

Bahl learned a long time ago that it’s important for a custom forage harvesting business to have good insurance. “It’s always a lot better to know what you have and fill any deficiencies before it has to be used,” Bahl opined. “Too many times, those of us in this business have to learn that lesson the hard way.” 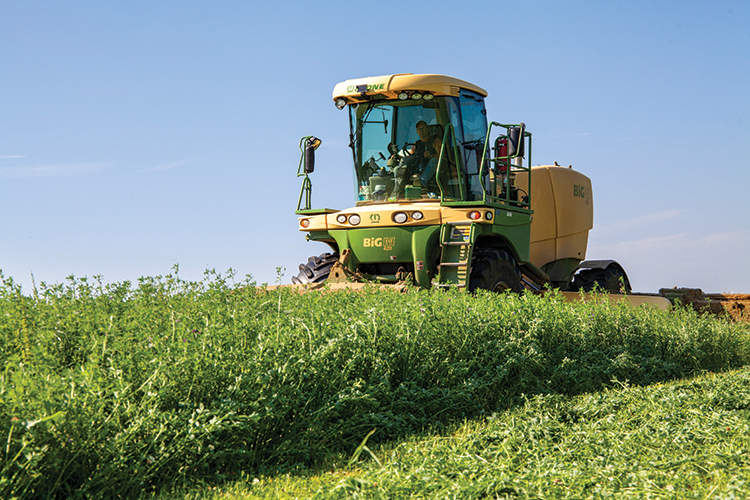 Bahl cuts some of his own hay that he usually establishes in late summer after a short-season corn hybrid is harvested for silage.

“About 60% of our jobs are for harvesting and silage bagging,” Bahl noted, “although we also do some bunker silos and a few uprights. We have a couple of larger dairies, but most of the farms in this area are small to medium-sized.”

“Unfortunately, a lot of the smaller dairies are going out of business,” Bahl said. “Some of them have shifted to baleage systems, which cut into our bagging business, while others are just relying on more corn silage.”

Even with the changing and diverse client base, Bahl has no trouble keeping busy with both his farm to operate and harvesting for his customers. “For me, the quality of the hay is the thing that I take the most pride in,” he said. “We try to get it cut on time and maximize leaf retention. What I really like about bags is that you can inventory your forage by quality. Even for my beef herd, I’ll have five or six different bags open in the winter and use them based on the type of cattle I’m feeding. It’s just a sound management system,” he added.

In addition to forage quality, Bahl is a stickler for machinery maintenance. “I try run a good fleet of equipment,” he emphasized. “Not necessarily new, but clean equipment that is in good working condition. My employees appreciate that.”

Bahl continued, “In the winter, each piece of equipment gets at least a week’s worth of attention in the shop. My rule is to find at least five things wrong, then find five more and five more after that. It may be something as simple as a missing bolt on a truck fender . . . that’s one. I don’t want to head into a new season with any soft spots.”

Each winter, a new set of kernel processing rolls goes into the forage harvester. “The dairy nutritionists monitor the conditioning pretty closely, so I don’t want any problems along those lines,” Bahl said. “We don’t want to be changing rolls in the middle of a job.”

The base of operations for Rusty’s Custom Chopping LLC is located on a farm that has been rented by the Bahl family for nearly 60 years and is down the road from the family farm operated by Rusty’s brother. The Bahls were able to purchase a few acres to build a house, machine shed, and shop, but otherwise are surrounded by rented land. “It’s not that we haven’t tried to purchase the farm, but the current owners haven’t been willing to sell just yet,” Bahl explained.

Generally speaking, client’s fields take priority over Bahl’s own fields. Even so, that often means taking care of the home farm during the evening, which makes for some long days. It has helped that the Bahls’ son Tanner has started to take an interest in the family business and can now be found operating the bagger, merger, or just offering general support.

As for his own alfalfa, Bahl has a unique approach for establishment. He prefers to make his new seedings in the late summer after corn silage is harvested. He explains, “For the fields we want to seed down, I will plant a short-day corn first in the spring and plan to have it chopped off by mid-August. This is advantageous in several ways. First, we ensure our equipment is ready for the silage season. Second, it gives us a place to go with our liquid cattle manure. Finally, we give the alfalfa enough time to establish so that we can get four crops off in the first production year,” he added.

Recently, Bahl began experimenting by seeding alfalfa under corn in the spring. This is a practice that John Grabber at the U.S. Dairy Forage Research Center in Prairie du Sac, Wis., has been trying to perfect over the past 10 years. “It actually established pretty well other than in an area of the field that stayed pretty wet,” Bahl said. “I think it’s something that I’ll try again.” Based on the success of his custom forage harvesting business and farming ventures, don’t be surprised if he makes it work.

This article appeared in the January 2021 issue of Hay & Forage Grower on pages 6 and 7.

Living their dream – farming the line Next