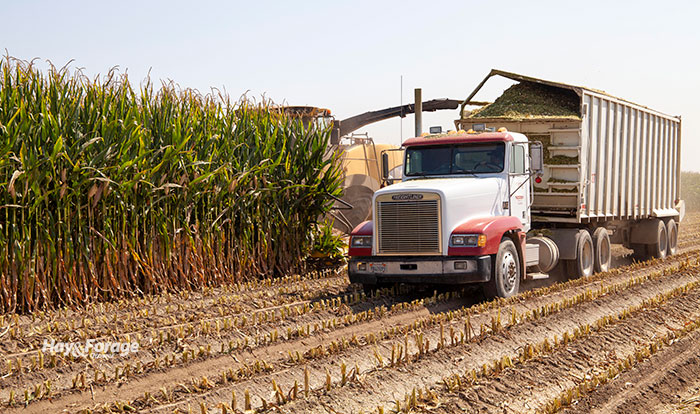 Large bags or bunkers are required to put silage into storage, but something much smaller is needed to help maintain quality when the feed is taken out.

Researchers at the University of Florida analyzed 158 peer-reviewed articles about how Lactobacillus buchneri-based inoculants influenced silage quality. Their meta-analysis was reported in the most recent issue of the Journal of Dairy Science and summarized by Rick Grant, president of the Miner Agricultural Research Institute, in the Farm Report newsletter.

L. buchneri is considered an obligate heterolactic bacteria because it produces both lactic and acetic acids during fermentation. The meta-analysis included studies that examined their effects on crops such as corn, sorghum, temperate and tropic grasses, alfalfa and other legumes, and sugarcane.

When L. buchneri-based inoculants were used, there was a reduction of silage lactate content of 7.2%. Acetate, propionate, and 1,2 propionate concentrations, on the other hand, improved by 62%, 30%, and 364%, respectively. Overall, the meta-analysis confirmed that applying L. buchneri-based inoculants to silage boosted its aerobic stability by 74%.

The meta-analysis also showed that L. buchneri-based inoculants caused pH to rise by 1.4%. Dry matter losses were also slightly elevated, but by less than 1%. To mitigate dry matter loss, the researchers suggest adding obligate homolactic or facultative heterolactic bacteria to the inoculant.

Higher aerobic stability was the result of greater concentrations of acetate and propionate in the inoculated silage. These compounds inhibit yeast and mold growth, which prevent silage from spoiling. In fact, mold counts declined three-fold and yeast counts were seven-fold lower.

Tropical grasses, such as bermudagrass and elephant grass, were the only forages in which aerobic stability did not seem to benefit from L. buchneri-based inoculation. However, there was very little data for these plant species, and information that was available was highly variable.

Different inoculation rates were also assessed in the meta-analysis, and it was concluded that rates of 105 and 106 colony-forming units per gram (cfu/g) were most effective. Rates of 107 cfu/g and above were still shown to improve aerobic stability, but the researchers noted this dosage would likely be too expensive for routine use on the farm.

Grant also notes that a smaller meta-analysis of only 12 peer-reviewed articles was conducted to evaluate the effect L. buchneri-based inoculants had on dairy performance. Although the outcomes were inconsistent, dry matter intake, milk production, and the efficiency of milk production did not seem to be impacted by inoculation.

“The bottom line is that L. buchneri-based inoculants greatly enhance silage stability due to greater acetate content and related lower yeast counts for all forage types except tropical forages,” Grant concludes. “This consistent and positive effect on aerobic stability is important given the significance of aerobic stability to dairy silage and feedbunk management.”

A tough year for grass seed production Next