Photo: Doug Mayo
When the laboratory grinding dust settled, and all 387 entries in the 2021 Southeastern Hay Contest were analyzed, it was Bill Conrad’s crimson clover hay that outdistanced the pack with a relative forage quality (RFQ) of 297. Conrad is a hay producer from Malone, Fla., and a frequent high finisher in the contest.

“Heavy rains in the eastern coastal plains, multiple storms coming through the Gulf, and some dry weather on the western side of the region made it a challenging year to produce hay in the Southeast,” said Marcelo Wallau, a forage extension specialist with the University of Florida. “But our farmers are resilient and persistent,” he added.

The winners of the Southeastern Hay Contest were announced last week at the Sunbelt Ag Expo in Moultrie, Ga. Award winners were recognized in seven different forage categories (see table below). In each category, the three highest RFQ samples captured cash prizes for the entrants. For his winning entry, Conrad will receive $1,000 in cash and his choice of the use of a new Massey Ferguson DM series disc mower or RK series rotary rake for the 2022 hay production season.

“The mission of the hay contest is to enhance awareness of the importance of testing hay so that feed demands can be managed based on forage quality,” Wallau noted.

The Southeastern Hay Contest marked its 17th year and is coordinated by the extension services at Auburn University, Clemson University, the University of Florida, and the University of Georgia. Producers from Alabama, Arkansas, Florida, Georgia, Kentucky, Louisiana, Mississippi, North Carolina, Oklahoma (east of I-35), South Carolina, Tennessee, Texas (east of I-35), and Virginia are eligible to submit entries. Extension agents in the various states engage producers and collect samples. 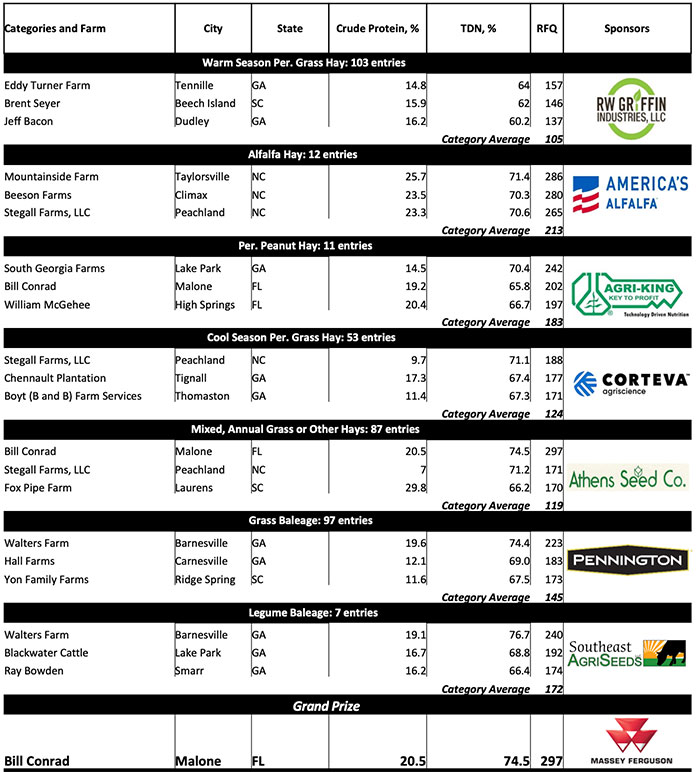 Pick a winter feeding area with care Next