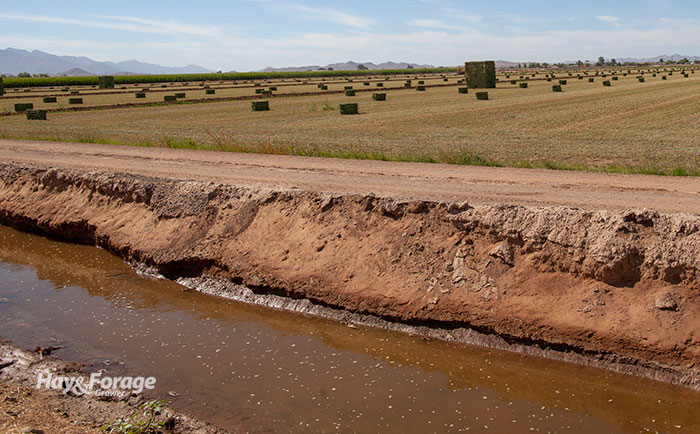 The current drought in the West has likely had no greater impact on other agricultural entities than on alfalfa, according to Dan Putnam, the longtime extension forage agronomist with the University of California in Davis.

“Drought is nothing new,” Putnam asserted while speaking at the Western Alfalfa & Forage Symposium in Reno, Nev., last November. “It’s something we’ve seen in the West for many years. But drought isn’t necessarily our biggest challenge; it’s more the variation in water supplies as we can go from drought to periods of flooding in a short period of time.” Regulatory curtailments of water supplies are also a major concern.

Putnam tends to take the path of evaluating the water challenges and then looking for alfalfa opportunities. Said another way, he’s a glass half-full individual.

In 2021, about 50% of the alfalfa in the West was impacted by drought. Irrigated alfalfa comprises almost 50% of U.S. alfalfa production, and it’s often the highest water user in many of the Western states. The legume is particularly impacted by drought.

In late 2021, after a scotching drought, many parts of California received well-above normal rainfall, with nearly the full yearly supply provided from October through December. Variation in precipitation is the norm.

The forage specialist pointed out that when the media wants to home in on large water users, alfalfa is often a favorite target.

“The sometimes-quoted figure of 80% of water is being used in agriculture is not really accurate and only accounts for water controlled for human use,” Putnam explained. “About 40% to 42% of the water in California is being used in agricultural enterprises for irrigation, about 10% to 12% for urban areas, and about 45% to 50% is either in outflows or for environmental allocations.”

He continued, “What many alfalfa critics fail to realize is that the cash value of alfalfa is not necessarily in the hay itself, but rather in the animal products it helps produce. Alfalfa is really part of a food production stream, and it brings a high value to the end consumer when compared to many other crops. Alfalfa also helps from the standpoint of recycling nutrients back to the farm.”

A popular billboard in the West reads “Food grows where water flows.” Putnam said that this is both a political and biological statement. He explained that, unlike humans, plants need a continuous stream of water to produce high yields and maintain turgor pressure from the roots to the leaves. “If we were plants, we’d essentially have to walk around with 50-gallon drums of water attached to our feet,” Putnam contrasted.

When looking at the Western alfalfa industry’s path forward in times of variable water supply, Putnam said that the biggest challenge is to look for more crop per drop of irrigation water.

“Alfalfa has a lot of interesting characteristics for a water-challenged future,” Putnam asserted. “It’s economically important for many farms, and those farms would fail without the ability to grow the crop. Alfalfa is high in water-use efficiency in terms of dry matter yield per unit of water used. It provides some flexibility during times of limited water availability, but it also is able to withstand a short-term flooding event.”

Alfalfa is highly saline tolerant and provides a wealth of wildlife and soil benefits. Putnam emphasized that this latter point is poorly understood by the public. “If we remove a perennial legume such as alfalfa from the landscape, we will lose the many positive environmental and wildlife benefits that are provided by the crop,” he noted.

The deep root system of alfalfa enables it to start growing right away in the spring as temperatures warm and to utilize residual moisture. Putnam said that it’s difficult to water a developed alfalfa crop deeper than its root system. The deep root system enables the plant to survive droughts and aids in the uptake of soil nitrates, which otherwise are destined for groundwater. Additionally, the alfalfa root system contributes positively to overall soil health.

“We had the experience this year up in Tulelake where the entire Klamath Basin was shut off from irrigation water,” Putnam said. “In spite of this, the harvesting crew for our variety trials were able to harvest two additional cuts without any irrigation. The two harvests still yielded a significant amount of forage by simply using the residual, deep soil moisture.” He pointed out that we wouldn’t expect this same result in some other lighter soil types.

In extreme cases, where irrigation water is simply cut off because of drought or for political reasons, alfalfa has the ability to be deficit irrigated — it can survive relatively long periods without receiving water. “Under drought, we recommend watering fully early, then cutting off later in the year,” Putnam said. “There will be a yield penalty, but at least some production can occur. Most of the dry matter accumulation takes place early in the season for alfalfa. Even if the alfalfa quits growing because of lack of water during the summer, it will typically regenerate either later in the year or the next year once water becomes available,” he added.

In terms of a watering strategy for alfalfa, Putnam recommends full irrigation early in the season for as many cuts as possible. If need be, cut the crop off from water at later harvests.

Variability in water supply will continue to haunt the Western alfalfa industry for the foreseeable years ahead. Putnam thinks that alfalfa’s resiliency characteristics make it a crop for this future of variable water supplies rather than a crop without a future.

Go for pocket gopher control in alfalfa Next