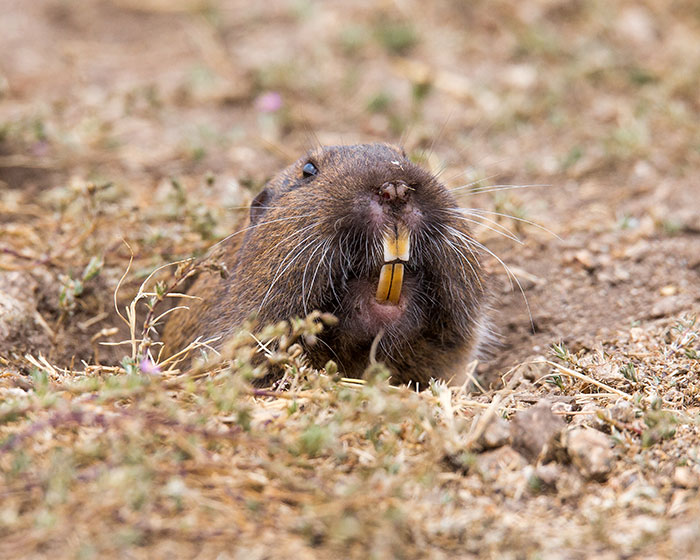 For many Western alfalfa growers, rodents fall into a major pest category right along with insects, diseases, and weeds. In addition to ground squirrels and voles, pocket gophers can devastate an alfalfa field with their burrowing and chewing on plant roots, which weakens or kills plants.

More recently, pocket gophers have been a detriment to subsurface drip irrigation (SDI) systems by chewing on the drip tape that is buried at a near optimum depth for gopher activity.

According to Roger Baldwin, an extension wildlife specialist with the University of California Cooperative Extension service, pocket gophers do more economic damage to alfalfa than any other crop grown in his state. Where gophers are present and left unchecked, the average revenue loss is about 9% for the grower. In addition to plant damage, the fan-shaped gopher mounds can wreak havoc with harvesting equipment. 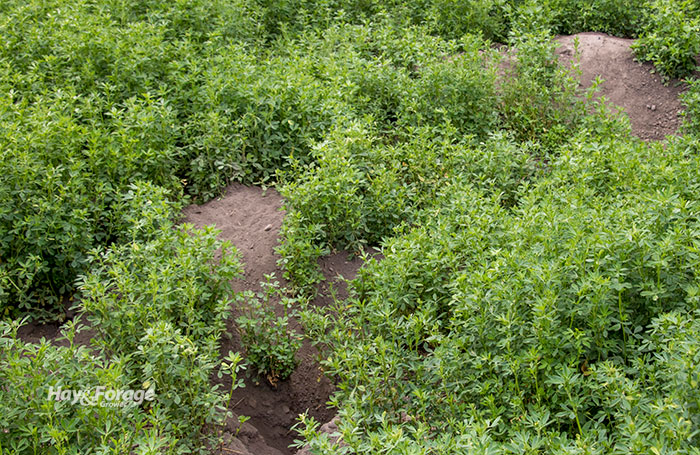 Rodent mounds can cause havoc with mowers and incorporate soil into the forage.

“To keep gopher populations in check, an integrated approach — using multiple strategies — is needed,” Baldwin said while speaking at the Western Alfalfa and Forage Symposium last November in Reno, Nev.

Effective approaches to controlling pocket gophers in alfalfa fields include habitat modification, baiting, burrow fumigation, trapping, and possibly a new repellent product. Flood irrigation is another tool that is used to reduce populations. As the field is flood irrigated, gophers come to the surface where they are picked off by predators.

Strategies such as exclusion, frightening, and shooting have not provided meaningful pocket gopher control in alfalfa fields.

Biocontrol of gophers with barn owls is one strategy that is being examined, and it may have promise, but Baldwin said there needs to be a high population of owls established in a gopher-plagued area.

“It is beneficial to destroy established burrow systems by deep tillage between crops,” Baldwin explained. “Research on ground squirrels suggests that tillage needs to be at least one and a half feet deep to destroy burrows, and I think the same might be true for gophers.”

For SDI fields, the wildlife specialist said there is currently some preliminary research looking at a new repellent product called Protec-T that is injected into the water that runs through the drip tape lines. Initial results showed a 41% reduction in gopher activity when the repellent was used.

“Trapping is safe and one of the most effective, although labor-intensive, methods for controlling pocket gophers,” Baldwin asserted. “Nonetheless, the cost and time for application often offsets its effectiveness.”

Several types and brands of pocket gopher traps are available. The most common type is a two-pronged, pincher trap such as the Macabee, Cinch, or Gophinator. A pocket gopher triggers these types of traps when it pushes against a flat, vertical pan.

Another popular type is the choker-style trap. Historically, these have been box traps that require extra excavation to place and may be a bit bulky to be practical in a large field setting. More recently, the use of a cylinder-type trap called the GopherHawk is being tried, which is a choker-style trap that takes little excavation and is quick and easy to set.

“Of the trap types tested, the Gophinator is the one that’s been most effective,” Baldwin said. “Specifically, it has proven more effective than the Macabee trap, which is a trap that’s been around for a century and is likely the most commonly used pocket gopher trap in the western U.S.”

Baldwin has seen little advantage to covering trap sets and no advantage to using attractants with the traps.

When done correctly, Baldwin’s research has shown that trapping is highly effective in removing pocket gophers from a field. He has achieved over 90% removal rates.

Most available rodenticides for baiting gophers are restricted-use products. These products include anticoagulants, zinc phosphide, and strychnine. Baldwin said that strychnine has proven to be the most effective baiting option.

Fumigating burrows with poison gas works best when the soil moisture is high, typically in the late winter or early spring in California. Baldwin cautioned that fumigants should not be used around buildings. He also mentioned that gas cartridges are not effective for gophers but do work well for ground squirrels.

Baldwin explained that aluminum phosphide, applied in tablet form, is highly effective for gopher control, achieving 90% to 100% efficacy, but it is also a restricted-use pesticide.

Recently, pressurized exhaust machine systems that produce carbon monoxide are being used to fumigate gopher and ground squirrel burrows. These include products such as the PERC machine, CO-Jack, and the BurrowRx. Research in California using the PERC machine has shown 60% to 65% efficacy when used for fumigation.