No surprise: 2021 hay production was down 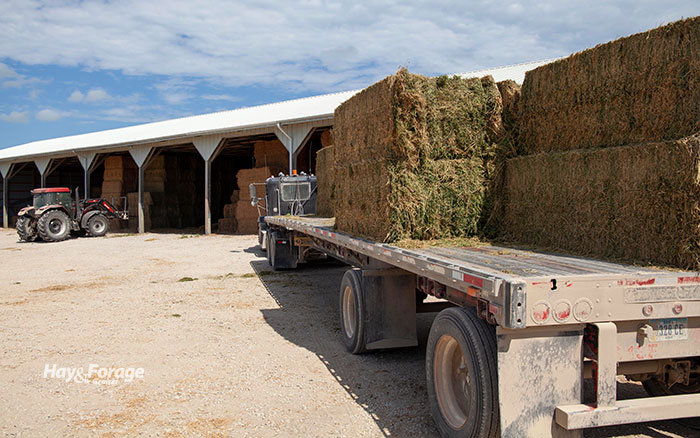 The annual release of hay and forage data by USDA that defines the previous year’s hay production and year-ending inventories arrived in email inboxes last Thursday. The Crop Production and Crop Production Annual Summary reports offer a glimpse of the current state of the forage industry and provide a gauge to measure hay market sensitivity to various production pressures in 2022.

USDA pegged December 1, 2021, hay stocks at about 79 million tons, down 5 million tons (6%) from a year ago. This puts stocks at essentially the same place they were in December 2018. Of course, they are far below the levels seen during the first 10 years of the decade. 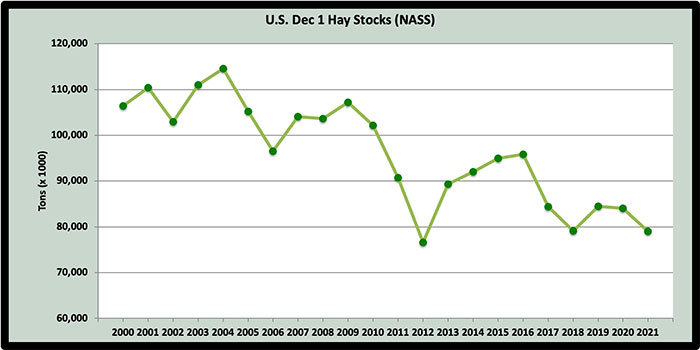 Regional differences in hay supplies almost always exist, and high-quality hay is generally in the shortest supply even when overall inventories appear adequate. Current inventories will continue to support historically high hay prices. Also, keep in mind that these inventory numbers do not account for hay stored as higher moisture haylage.

USDA’s Crop Production Annual Summary set the final 2021 harvested hay acreage at 50.7 million, which was 3% fewer acres than the previous year. The estimate only includes acres that had at least one cutting harvested as dry hay.

Harvested acres of alfalfa and alfalfa-grass dry hay mixtures in the U.S. declined by 6% to 15.25 million, which was a loss of nearly 1 million acres.

South Dakota had the largest reduction of harvested alfalfa acres in 2021 at 500,000. Another drought state, Montana, followed behind with a loss of 350,000 alfalfa acres while North Dakota dropped by 300,000 acres.

Arizona and California continued to dominate the average alfalfa yield category in 2021, notching 8.3 and 7.4 tons per acre, respectively.

The 2021 production of all dry hay types in the U.S. totaled 120.2 million tons, down 5.2% from 2020. South Dakota, North Dakota, and Montana all had year-over-year total hay production reductions of about 40%. Some states, such as New York and Colorado, had significant production gains over the previous year.

Total alfalfa dry hay production was pegged at 49.2 million tons, 7.2% below the previous year but slightly above earlier estimates.

In some states, alfalfa hay production was cut significantly in 2021 compared to 2020. Included in this group are:

In all cases, the lower production was caused by reductions in both acres and yield relative to 2020.

Significant dry alfalfa hay production gainers in 2021 were led by:

As it always does, Wisconsin easily led the nation in 2021 corn silage production with 19.14 million tons produced from 890,000 acres. However, this acreage was down 70,000 from the previous year. Idaho topped the yield chart in 2021 with an average mark of 29 tons per acre. Arizona and California followed closely behind at 28 tons per acre.

In 2021, most U.S. hay acreage, yield, and production metrics were marginally or significantly lower when compared to the previous year. Depleted hay inventories in many states caused by lower production will continue to bolster historically high hay prices. States in the upper Great Plains were hit especially hard by drought for the second year in a row and production figures reflect huge losses in hay production.

Hay markets are generally regional in scope. From these USDA reports, it is easy to see that there was a wide state-level range of production gains and declines compared to the previous year. Extreme weather events are becoming more common, and virtually all of these are localized.