Grazing for the present and future 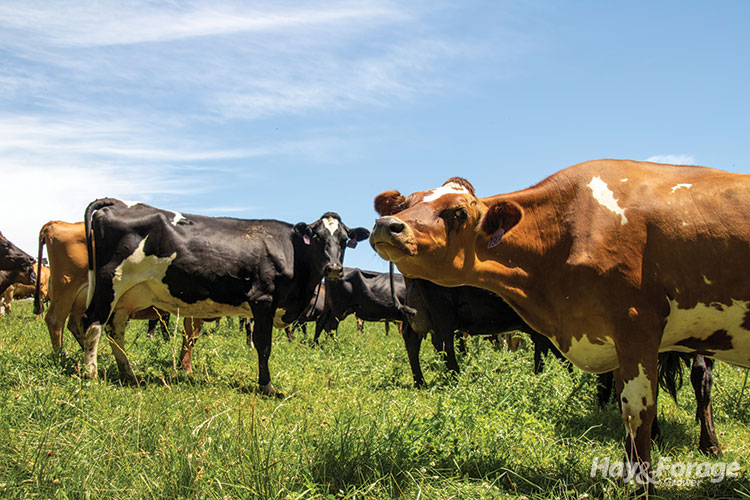 Scott Mericka greeted me with a firm handshake and a friendly smile as I arrived at Grass Dairy in Dodgeville, Wis. He is the owner of a farm that is nestled in the hills of the Badger State’s southwest Driftless Area. Mericka was eager to show me the farm and share his story, which started off unlike most others. He had been working at a large organic dairy in California when he began to feel uninspired and wanted an opportunity to farm for himself and define his own career. Then one day, he came across a “Help Wanted” ad.

The previous owners of Grass Dairy were looking to hire someone they could eventually sell their farm and cheese plant to. They were one of the first dairies to implement intensive rotational grazing in Wisconsin during the early 1980s and managed a small, seasonal, grass-fed herd. Mericka was interested in the operation, and in 2010 he started working as an apprentice alongside his current business partner, Andy Hatch. Mericka and Hatch formed a profit-sharing agreement with the farm’s owners and gradually earned enough money to purchase the operation in 2017. 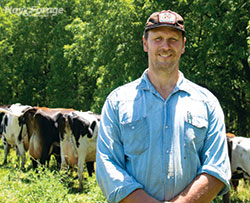 Scott Mericka strives to graze his dairy cows 250 days per year.
Today, Mericka manages the farm, which is home to 200 crossbred dairy cattle. He lives there with his wife, Liana, and their two young children. Hatch manages the operation’s cheese plant, Uplands Cheese, and the duo work together to produce award-winning products. The unique flavors of the renowned cheeses are derived from the high-quality forages their cows graze on the farm.

A plethora of species

Mericka’s farm comprises roughly 600 acres – 10% of which is dedicated to annual forages. In the winter, he arranges large round bales in a predetermined portion of less productive pasture for his cattle to graze. This land is rough and muddy come spring, so it undergoes a series of reseeding steps before being put back into the grazing rotation.

Mericka starts by drilling sorghum-sudangrass into the battered ground and rotates his cattle on it twice during the summer. Grazing this warm-season annual helps alleviate the summer production slump that many of Mericka’s cool-season grasses fall victim to.

In October, Mericka seeds winter rye over the sorghum-sudangrass. The winter rye commences the grazing season the following spring and cattle take to these fields as early as mid-April. After two rotations, the rye is terminated, and Mericka no-tills a dynamic mix of grasses, legumes, and chicory, which will go into rotation in subsequent years.

Mericka is partial to meadow fescue in his permanent pastures. “It has probably been the most resilient and best performing, and it winters better than ryegrass does,” he said. Tall fescue, orchardgrass, and smooth bromegrass are also key components to his perennial base.

The veteran grazier has been incorporating more alfalfa into his fields because it tends to withstand the summer slump better than some of the other forages. He also seeds other legumes such as ladino and red and white clover, which the cattle seem to selectively graze. “In my experience, the cows prefer clovers over alfalfa, but I think alfalfa does better when it’s hot and dry,” Mericka shared.

To combat hot and dry weather conditions, Mericka applies 50 to 75 pounds of nitrogen and gypsum to his fields in July. The added nutrients help boost forage production and ward off rust development when pasture growth slows.

In addition to pastures, 35 acres are reserved for corn silage. Some of this crop is custom chopped and bagged to be fed at milking. Mericka will also cut and rake corn silage and have it custom baled into the aforementioned large round bales the cattle graze throughout the winter.

Mericka’s goal is to graze for 250 days, so he must be diligent when it comes to monitoring what is available. Every week, he uses a rising plate meter to determine how much forage dry matter is available, how much area he can allot for the next paddock, and how long his cattle can stay before being moved. He uses single-strand, high-tensile wire for fencing and a tumblewheel to allocate new pasture, which fits his flexible style.

At the beginning of the season, Mericka’s rotation usually lasts around 20 days. At this time, his pastures seem to grow faster than what his cattle can consume. If he experiences a surplus of growth, Mericka cuts his pastures to make hay. Alfalfa is cut for haylage and large square bales that are used to supplement pastures during the summer slump. In this case, Mericka will also slow down his rotation to about 35 to 40 days and scale back on paddock size.

“If I’m losing more grass than I’m gaining, I need to make my rotation last as long as possible,” Mericka explained. “I use less pasture and feed more hay to let forage production catch up. If I need 6,000 pounds of feed every day, but the pasture can only provide 3,000 pounds, it’s time to bring hay to the table.”

Being a seasonal dairy, Mericka’s spring calving season is condensed to about 50 days. He keeps his heifer calves and has an arrangement with a neighbor who takes his bull calves. When the heifers are weaned, Mericka relocates them to a farm less than a mile north of his home where they will stay until they are bred.

Breeding season is also rigorous because Mericka has a short window of time to get all of his heifers and cows bred. He uses A.I. but also keeps a couple bulls in his herd for clean-up. Even though calving and breeding can be intense, Mericka tries to enjoy a bit of downtime when the hard work is done.

“The biggest benefit of being a seasonal dairy is how everything comes in waves,” Mericka said. “Once it’s mid-summer and the dust settles, things kind of calm down. But, there is always something to do on the farm.”

Mericka hopes to find even more success in seasonal breeding when he begins the unique approach of milking once a day. He is currently milking twice a day, but is planning on expanding his herd to approximately 250 cows so he can maintain the farm’s level of milk production after the switch. He said once-a-day milking should create less stress on the cattle and make breeding more efficient, which is important for his system.

“I hope to get cows that reproduce and calve faster and easier,” Mericka explained. “I know my cows are going to settle because we are managing for lower production, and we go into June knowing they are going to breed.”

One of the risks of milking once a day is, of course, producing less milk. Mericka said he could feed more grain to mitigate this loss, but he chooses not to because preserving the milk’s grass-fed taste is top priority for the cheese-making business. “We could probably produce more milk per cow if we fed more corn silage, but it would dull the things that make the milk unique for the cheese,” Mericka said. “We can make lower volumes of milk that have a lot of grass flavor, and that’s kind of our signature.”

Nearly 60% of the farm’s milk goes to Uplands Cheese. The other 40% is shipped to Rolling Hills, a local co-op that processes milk through the Cows First program with Meister Cheese in Muscoda, Wis.

Managing forages properly improves the milk, and managing genetics improves the herd. Mericka has identified specific characteristics he wants in his cattle and has developed a cross between New Zealand Jerseys and New Zealand Holstein-Friesians — an unusual mix that meets all of Mericka’s requirements.

“My neighbors call them ‘pasture donkeys,’” he joked as he described his cattle. “The phenotype I like is 1,000 pounds, short, wide, walks a lot, has a good udder, and produces low-volume, high-component milk so I can make once-a-day milking work.”

Many dairies in New Zealand also operate on a seasonal breeding schedules, so Mericka models his farm after them. He utilizes resources from the Kiwis to learn how to improve his grazing plans, breeding techniques, and even employee management. Mericka seeks this information from New Zealand simply because he said there is not as much research about or implementation of seasonal dairies in the U.S.

Looking ahead, Mericka not only wants to enhance his operation, but enhance the lives of others as well. Similar to what his predecessors did for him, he is mentoring young farmers through the Dairy Grazing Apprenticeship Program (dga-national.org). Aspiring graziers come to work for Mericka, and they receive on-farm training while completing structured coursework to equip them with the skills to one day farm on their own.

Mericka hopes to find his own replacement among one of his apprentices and pass the farm onto them. This means another profit-sharing agreement is in the future, but next time, Mericka will be on the exit end. He is ready to grow the business in order to bring in equity partners, teach them to the best of his ability, and allow them to have some “skin in the game” throughout the process — ultimately providing others with the opportunities that were once provided for him.

“My motivation is to build the business around people who care and have them be a part of it all,” he said. “If that means we have to milk 500 or 1,000 cows, then that’s the number of cows we will milk to make it all work.”

Succeeding in succession Next