The annual release of hay and forage data by USDA that defines the previous year’s hay production and year-ending inventories last month. The Crop Production and Crop Production Annual Summary reports offer a glimpse of the current state of the forage industry and provide a gauge to measure hay market sensitivity to various production pressures in 2022.

Overall, virtually all forage production metrics were down in 2021 compared to the previous year — even corn silage production.

USDA pegged December 1, 2021, hay stocks at about 79 million tons, down 5 million tons or 6% from the previous year. This puts stocks at essentially the same place they were in December 2018. Of course, they are far below the levels seen during the first 10 years of the decade. 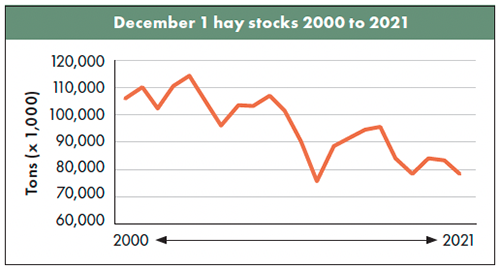 This article appeared in the February 2022 issue of Hay & Forage Grower on page 25.

Alfalfa hay prices rebound; up $42 from January 2021 Next