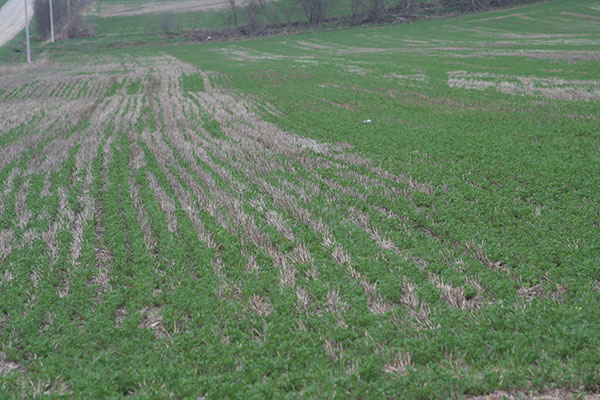 Once temperatures warm and alfalfa growth begins in the spring, the ritual of assessment is initiated. The hope is that a combination of favorable weather and previous thoughtful management will have fields carpeted with green plants that strongly resemble alfalfa; in other words, a keeper.

Not welcomed is a carpet of brown, or something close to it. Fortunately, this doesn’t happen often and not nearly as much as it did 25 years ago in the greater North. When it does, the decision of what’s to follow is painful, but an easy one to make: Time to put this field out of its misery and plant something else.

Lastly, there is the marginal alfalfa stand — a perhaps better outcome than the brown field but agonizing from a decision-making standpoint. These are the fields that have been uniformly thinned or have large areas of dead plants and larger areas of productive plants.

On a typical alfalfa and corn silage-based dairy farm, the marginal alfalfa field generally offers three primary alternatives: keep the field for the duration of the season and accept the reduced yield, take just the first cutting and then plant a short-season corn hybrid for silage, or terminate the field early and plant full-season silage corn.

By plowing and planting corn for silage early, you give up all alfalfa production on the field for the current year but do your best to ensure maximum silage yields from early planting and using a full-season hybrid. This still may not seem too appealing if you really need the alfalfa in the short run or if it’s a relatively new stand and want to capture more return on the establishment investment.

By waiting to take the first-cut before planting corn, you get some alfalfa production to fill a short-term need; however, this is done at the expense of reduced corn silage yield. If corn planting doesn’t occur until June, the yield reduction often ranges from 40 to 60 percent of an early planted full-season hybrid. Receiving adequate moisture and controlling weeds after the corn is planted are the keys to success.

The right thing to do varies with each year and each farm situation. The problem is that the best choice is almost always dependent on future weather conditions that can never be predicted at the time of the decision.

Assessing alfalfa growth as of late April or early May is the key. If growth is well behind normal, you can be pretty sure corn won’t get planted until after the first week in June. At that point, corn yields are significantly reduced and may make waiting less desirable. Conversely, if growth is well ahead of normal, the odds of planting corn before June 1 increase.

In looking at this exact question, research studies done at Michigan State University confirm that the best economic decision is usually to terminate the alfalfa early and plant full-season corn for silage. This decision will likely need to be accompanied by the establishment of additional alfalfa acres.

Managing with and against alfalfa stem nematode Previous