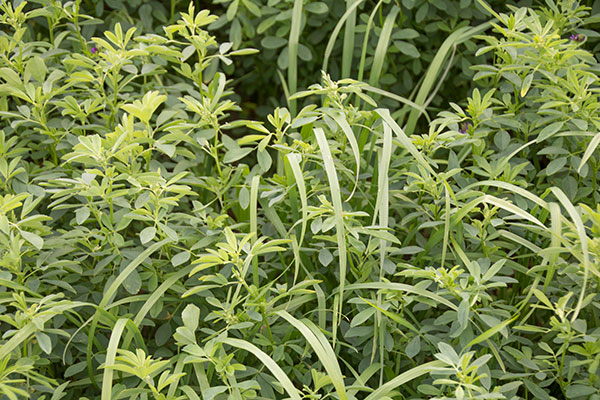 Due to reduced yield and disease susceptibility, growing meadow fescue in the U.S. ceased decades ago. However, the grass has noteworthy potential as a companion grass in alfalfa-grass mixtures.

In Cornell’s What’s Cropping Up? blog, Cherney notes that meadow fescue has greater fiber digestibility (NDFD) than many other grasses, including tall fescue. He points out that meadow fescue yields slightly less than tall fescue, but thinks that may be advantageous for alfalfa-grass mixtures where a grass percentage of less than 40 percent is often desirable.

Meadow fescue grows best in deep, rich soils. It cannot tolerate flooding and is more sensitive to drought than many other grasses, though it does persist in dry conditions. Areas suitable for timothy can grow meadow fescue. It is also considerably more winter hardy than tall fescue, so it can be grown in more northern environments.

Plant breeders have developed many grass hybrids by crossing meadow fescue, tall fescue, and annual or perennial ryegrass. These are referred to as festuloliums. They vary significantly in appearance, winterhardiness, and forage quality due to the relative proportions of grasses in each.

Cherney suggests to seed meadow fescue at 4 to 5 pounds per acre in mixtures with alfalfa. This can be done in early spring or late summer about four to five weeks prior to the first freeze.

Optimum rainfall in the first growing season resulted in significant grass growth for most varieties. Prolonged dry conditions the following season greatly reduced the grass percent for all species, but especially meadow fescue.

“Grass percentage in a mixed stand will be strongly influenced by environmental conditions,” Cherney says.

They found that the ryegrass-type festulolium was vigorous and aggressive, requiring considerably less seed per square foot than other grasses.

The study also showed that as the grass percent grows in a mixed stand, less nitrogen (N) is available from the alfalfa and there is more competition for the limited N.

Cherney notes that there has been a shortage of meadow fescue seed in the past couple years. However, the number of varieties in the U.S. is rapidly growing, with at least a dozen now available. He says that since varieties originate from a wide geographical range and differ in forage quality, it is best to pick a certified, named variety.

Abusing round bales Next