University of Missouri Extension forage specialist. His work and interest in fescue toxicosis has him involved in a genetic test for tolerance in cattle. 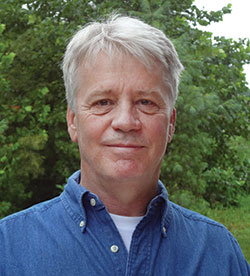 HFG: Working in the heart of the Fescue Belt, you see or hear about the effects of fescue toxicosis on a daily basis. Just what kind of impact are we looking at from an economic and animal performance perspective?

CR: Even putting aside the herd health issues (vasoconstriction, thermoregulation, immunosuppression), toxic fescue is devastating to beef production. It reduces calving rate, shrinks intake and gain, lowers weaning weight, and drops milk production. The impact is severe. For example, on a “straight grass” comparison, rate of gain can drop from 1.7 pounds per day (on nontoxic grass) to 1 pound per day (on toxic fescue); that is typical. Milk production can decline by 30 percent. Calving rate (in spring-calving herds) can fall from 95 percent to 58 percent.

HFG: When was it realized that some cattle were more tolerant of fescue toxicosis than others?

CR: Many farmers and scientists have observed differences within cow herds for many years. Unfortunately, their observations were sometimes ignored because their remarks were often exaggerated. Many claimed that their cattle were completely resistant to toxic fescue. No cattle are completely resistant, and follow-up research proved that.

HFG: Tell us about the launch of AgBotanica LLC. How and why did it come into being and who was involved? How did you become involved?

CR: AgBotanica was launched in response to a call from John Gardner and other University of Missouri administrators. They wanted faculty to be more proactive in economic development. The company started in 2004 and began by handling grain samples for quality analysis. Over the past 12 years, AgBotanica has grown to address other areas of agriculture.

The partners and company history are described on the company website: www.agbotanica.com; in addition to the partners, others work with AgBotanica on a contract basis. I became involved in the company because of my work with near-infrared analysis of plant and animal tissues. My involvement in the T-Snip test occurred merely because of my partnership in AgBotanica. Though I came in through the side door, the test caught my attention immediately, as I have worked in fescue toxicosis for 36 years. During that time, I have seen 100 home remedies that claimed to work but didn’t. This test works; it is fascinating to me.

HFG: How difficult was it to develop the test for toxicosis tolerance?

CR: I did not develop the test, but I know who was involved and how it was developed. Our company is advised to not discuss development but to focus on the confirmation data. I would say, however, that I have seen how difficult it was to develop this test.

HFG: What procedure was used for documenting the accuracy of the test?

CR: There are several ways to confirm the accuracy of T-Snip, as this test scores for performance based on average daily gain, dry matter intake, weaning weight, and soon other measures of performance. The easiest confirmations occurred by comparing T-Snip test scores to 205-day adjusted weaning weights. When the test was launched, it had been tested on almost 3,000 cow-calf observations, on eight farms, many of which were tested over two and three years.

HFG: If a beef producer wants to test cattle for fescue tolerance, what is the protocol? How much does it cost?

CR: The protocol is laid out in five steps: 1. Obtain sampling cards. 2. Print a sampling form (from www.agbotanica.com). 3. Collect the blood or hair sample. 4. Submit payment. 5. Mail the sample to AgBotanica in Columbia, Mo. The turnaround time is four to six weeks.

HFG: How are test results interpreted?

CR: T-Snip is reported in scores from 0 to 5. Cattle that score 0 or 1 are highly susceptible. Cattle that score 4 or 5 are most tolerant. From the cattle we have seen, there is plenty of improvement to be made, as many cattle score moderate or low.

HFG: Are there many bulls currently being tested for tolerance?

CR: Yes. Probably about 10 to 15 percent of incoming samples are bull samples.

HFG: Given that single trait selection can be dangerous, once the test results are in hand, how should they be used?

CR: According to the animal scientists, single trait selection is not only dangerous but can be devastating. The cow line with the best growth and/or carcass traits in a herd could be among the most intolerant to toxic tall fescue. It would defy logic to cull superior growth and carcass traits just for greater tolerance to tall fescue. Rather, a producer should use fescue tolerance data to further improve performance potential of the herd. Bulls with higher T-Snip scores would be expected to produce calves and replacement heifers with greater fescue tolerance. A low T-Snip score (0 to 2) would not be a reason to cull cows that produced the best calves in a herd, but rather could be used to identify how these cows’ calves could be made even better by using sires that had higher T-Snip scores (more fescue tolerant).

HFG: Where does the test fit with other methods of fescue toxicosis management such as using the novel endophyte trait, seedhead suppression, or feed supplementation?

CR: The best recommendation for addressing fescue toxicosis is to renovate the pasture by killing out toxic Kentucky 31 and planting a novel endophyte. Novel endophytes are true cures.

If replanting is not an option, implement several mitigation practices. Which management practices are best is a matter of opinion. But in my view, selecting cattle for fescue tolerance is the best of these other practices. It is a one-time event for each animal. It is not a practice that needs to be implemented every year on each acre or each animal. And most importantly, it allows the producer to recover half of what was lost by susceptible cows grazing toxic fescue. It improves weaning weight and gain immediately. And again, there will be other positive responses reported as the research is completed. It’s not a thing that has to be performed each year (and paid for each year).

I would add that novel endophytes and T-Snip are not mutually exclusive. They can and probably should be implemented together. Cattle on novel endophytes are naïve. When they are sold and then grazed on a neighbor’s toxic fescue, they will undergo “fescue shock.” However, the fescue tolerant cattle will perform better in the long run.

HFG: Do you see this as a tool that beef producers in nonfescue areas might also be interested in if they are selling stockers into the Fescue Belt?

CR: Absolutely. We are already seeing that. Some producers outside of the Fescue Belt refer to their cattle as “fescue ready” when those animals score high on this test.

Also, producers with novel endophytes should consider themselves as being in a nonfescue area. Again, those animals are excellent. But they are naïve to toxic fescue.

HFG: Where do you see the future headed with the incorporation of fescue toxicosis tolerance into the genetic pool?

CR: Testing for fescue tolerance will be one more technology used in genetic analysis of cattle and likely will be added to genetic test platforms available to cattle producers. Based on performance potential benefit, a cow-calf producer with cattle in the Fescue Belt should use bulls tested to be tolerant to toxic fescue and use fescue tolerance testing as one (not the only) of the selection criteria for identifying replacement females. Therefore, it is expected that performance data on sires will include a T-Snip score.