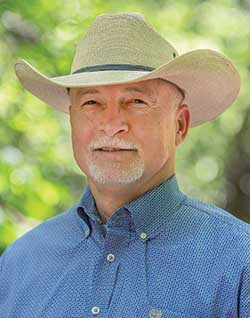 Hugh Aljoe
HFG: How did the Noble Foundation come to be?

HA: As a young man in the early 1900s, our founder Lloyd Noble witnessed the value of agricultural production to Oklahoma and its people. However, he also saw the dramatic effects of poor farming practices on the land’s fertility and the state’s economy. Noble became a successful oilman during the 1920s and 1930s. During this same era, a drought plagued the region. Combined with the poor farming practices that had left the land vulnerable, the region experienced the great Dust Bowl.

Noble saw the land as essential to the future successes of Oklahoma and the nation. He understood that the land would continue to be needed long after oil and gas were gone. He established The Samuel Roberts Noble Foundation in 1945 to address the challenge.

The Noble Foundation’s early efforts focused on educating and encouraging area farmers and ranchers to practice land stewardship and resource conservation. Today, the foundation’s three operating divisions work together to move science from the laboratory to the field in an effort to enhance production agriculture and plant improvement while remaining true to Noble’s vision of assisting farmers and ranchers.

The work has changed through the decades, but the mission remains the same – to advance agriculture.

HFG: Forage crops seem to be a primary focus of research and outreach efforts. Is that simply because forage-based production systems dominate agricultural systems in the Southern Great Plains?

HA: Yes. The Southern Great Plains lends itself best for non-irrigated, forage-based beef cattle production and as a result, beef cattle are the number one agricultural commodity in the region. The Noble Foundation seeks to assist producers with their production systems management and forage crops in combination with proper management of native grass ecosystems, which are the foundational building blocks for a successful beef cattle enterprise.

HFG: Though pastures and beef cattle operations are important to the Southern Great Plains, the Noble Foundation has been involved in a number of broad-reaching projects such as the development of the transgenic, reduced-lignin trait marketed as HarvXtra. What role was played in that effort?

HA: Our fundamental scientists identified alfalfa’s natural genetic pathways and specific genes that produce lignin within the plant. Lignin serves as the internal “superstructure” responsible for holding the plant upright. While lignin serves an important role within the plant, it provides no nutritional benefit to the animal and is largely converted to waste. We sought to modify the natural production of lignin to a point that plant performance was not impaired, animals found the plant material to be more digestible and farmers realized an additional benefit in their harvest practices.

While certainly a long-term project, this project evidences the important role laboratory discoveries can play in the field. Of course, our discovery is only one part of the overall story; Forage Genetics International, our commercialization partner, is responsible for years of performance and safety testing, identification of the appropriate underlying cultivar, and then bringing this product to market.

HFG: Noble Foundation scientists often collaborate with those at other universities to breed and develop new plant varieties. Recently, we’ve seen your involvement in the release of a novel endophyte tall fescue variety and a new white clover variety. Tell us about those efforts.

HA: The development of new forage varieties for improving livestock production in the Southern Great Plains is a major goal of the Noble Foundation breeding programs. The Noble Foundation regularly fosters collaborations with universities regionally, nationally, and internationally in order to advance the breeding process. These collaborations were especially important in the development and release of the cultivars Texoma MaxQ II and Renovation.

Forage variety trials, such as those at the University of Kentucky, Mississippi State, or the University of Tennessee, just to name a few, provide important unbiased information about yield or grazing tolerance that is extremely important to breeders and their programs. Without these university trials, the performance of potential cultivars at both the regional or national level is nearly impossible to determine.

The white clover cultivar, Renovation, was the result of a direct collaboration with a university. Renovation white clover was developed through an agreement between the Noble Foundation and the University of Georgia (UGA) to jointly develop and evaluate experimental forage cultivars. One of the major goals of this agreement was for the Noble Foundation and the UGA forage breeding programs to jointly develop new white clover cultivars for use as renovative legumes for perennial grass pastures throughout the southern U.S. One of the best experimentals developed through this collaborative agreement is now being jointly released as the cultivar Renovation.

HFG: How involved is the Noble Foundation involved in gene mapping of forage plant species?

For alfalfa, we are working to sequence the diploid and tetraploid alfalfa genome, complete the gene annotation, and develop molecular markers and genetic linkage maps. This genetic information will be available through the Alfalfa Breeder’s Toolbox, which includes breeder-friendly resources to integrate genomic, genetic and phenotypic data that can be used to develop enhanced cultivars.

HFG: In addition to cutting-edge science, the Noble Foundation also has an extensive outreach program working directly with Southern Great Plains producers and offering educational programs. How has this mission evolved or changed over the years?

HA: Through the producer relations program, the Noble Foundation provides advice and education to regional producers. The program has always complemented the research efforts. We look at the individual operations and provide advice to producers based on their goals and objectives, resources, and management abilities. The education activities associated with the producer relations program are to complement the producers’ needs. We communicate the value of best management practices and promote operational management that incorporates these practices in a system-wide approach. We use our educational events as forums to convey fundamental practices; introduce emerging science and technologies; and explain where, when, and how these new concepts will have the most value to producers.

We emphasize the use of integrated systems — each action has a consequence and impact on other parts of a producer’s operation, and producers must be mindful of these consequences to be successful. As the science and technology of agriculture evolves, we seek to educate regional producers on what is emerging in the industry while also vetting the same within our own enterprises. Our role is often to help the producers determine which management practices are of most value to their enterprise as not all practices are applicable to every operation.

What has changed the most for us in recent years is the new venues for education and learning opportunities using the internet and social media. We are striving to deploy more information through these readily accessible outlets through our education services program. We are exploring new ways to deliver information to those seeking knowledge. For example, how-to videos and time-sensitive seasonal information.

HA: The Southern Great Plains is unique in that it encompasses more than 12 land ecosystem types across a 40-plus inch rainfall gradient (12 inch annual rainfall to almost 60 inches). The land resources are diverse. Understanding how to make the best use of each land resource type and the forage types that can be produced within each resource given the rainfall patterns is a great challenge. Even rainfall patterns have enormous dynamics where periods of droughts and favorable rainfall not only occur but also are expected.

To add to the challenges, producer demographics are changing. We are observing more new landowners investing in agricultural land and enterprises without having first-hand knowledge of agriculture and agricultural systems. These producers need both the advice of how to manage their operations efficiently and the associated foundational education at their fingertips. That is where the Noble Foundation will continue to be relevant as we can provide both advice and education tailored to individual resources located in the Southern Great Plains.

We know the region. We have seen agriculture evolve through the last 70 years, even those operations that include Noble Foundation resources. As the science and technologies evolve in forage-based beef production, we will integrate them into proven production systems and educate our regional producers in the process.

HFG: Finally, the Noble Foundation is known for its community philanthropy. Why is this an important part of the mission?

HA: The Noble Foundation’s philanthropic efforts stem from the organization’s inception. It’s in our DNA. Our founder Lloyd Noble named our organization after his father, who he called the most generous man he’d ever met. Our philanthropy takes many forms, including grants to support community projects, higher education, and human health research and delivery.

On a smaller scale, we provide targeted support to projects such as area youth stock shows and state organizations such as Oklahoma FFA. In our hometown, our employee-base donates thousands of hours through our Noble in the Community volunteer program. The unofficial motto of Noble in the Community is “community matters.” Our founder believed it, and each of us carry forward this legacy each day.

HFG: Favorite food? (Everyone gets asked this question)

This article appeared in the November 2016 issue of Hay & Forage Grower on page 22.