Current director of product development for Alforex Seeds. His 32-year career in the alfalfa industry as a breeder and product manager has spanned many changes in the industry. 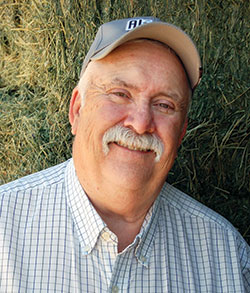 Don Miller
HFG: Did you always aspire to be an alfalfa breeder, or did that opportunity just open up once you completed graduate school at New Mexico State University?

DM: During college, I had no idea that I would eventually end up as an alfalfa breeder. After completing my B.S. degree, the alfalfa breeder at New Mexico State University hired me as a program technician. As a university employee, I could enroll in a couple of classes each semester free of charge, so I started taking courses in agronomy and eventually got my graduate degrees in agronomy/plant breeding. I received lots of on-the-job training with one of the better alfalfa breeders in the country.

HFG: During your 32 years of involvement in the alfalfa industry, there has been a lot of seed company consolidation. What do you consider to be an advantage and disadvantage of this consolidation?

DM: To me as a plant breeder, the advantage of company consolidation has been the ability of a breeder to have access to the advanced breeding lines of the acquired companies for variety development. Also, the additional financial and manpower resources that often result from these mergers can enhance variety development.

The disadvantage is that the variety development of larger companies is often geared toward large markets where they can best recoup their costs. Hard to justify a large alfalfa breeding program’s expenditures for alfalfa variety improvements that would only benefit small regional markets.

Company consolidation has to some extent also adversely affected varietal testing activities at universities. The number of companies entering varieties has been reduced to the level that it’s hard for the universities to get enough entries to justify the fees it would need to continue their testing programs.

HFG: Most of your time has been spent in the West. Is it easier or harder to develop semi and nondormant alfalfa varieties compared to dormant lines?

DM: I think each has its own unique challenges; however, I don’t feel one is more difficult than the other in regard to varietal development. Each has different breeding priorities. A breeder has to structure their breeding program to select for the important varietal traits needed for performance in the region where the new variety is going to be marketed.

HFG: Do you feel we will reach a point where saline and/or sodic soils can be overcome through alfalfa plant breeding?

DM: During the last decade, alfalfa plant breeders have significantly improved alfalfa productivity and tolerance to salinity, and there is still potential for further varietal advancement. However, genetic tolerance to salinity has its limits. Improved genetics needs to be combined with crop and soil management.

The sodic soil with its poor soil structure is more difficult to overcome with improved alfalfa genetics. I feel the best approach for enhancing stand establishment and plant productivity in sodic/saline soils will be by implementing soil management techniques to repair the poor soil structure inherent with sodic soils and then couple that with the use of salinity tolerant alfalfa varieties.

HFG: In your current position with Alforex, you’ve been involved in developing and marketing nontransgenic alfalfa with reduced lignin content. Where do you see this effort headed into the future?

DM: I think the introduction of low-lignin alfalfa is a significant advancement in alfalfa improvement. The benefits have the potential of enhancing the utilization of alfalfa in the dairy ration, which could have a tremendous effect on the alfalfa industry. For the last several decades, the number of alfalfa acres nationally has been declining and this product may help curb that trend.

HFG: What is your greatest concern for the alfalfa industry in the years ahead?

DM: The potential for genetic improvement of alfalfa in the future looks very exciting. However, alfalfa plant breeding in today’s world has become more and more complicated, in part due to the business aspect. The free exchange of ideas and breeding lines between alfalfa breeders in the private and public sectors is continually being restricted.

DM: Being raised in New Mexico, my favorite meal is green enchiladas and chile rellenos.

This article appeared in the January 2017 issue of Hay & Forage Grower on page 20.