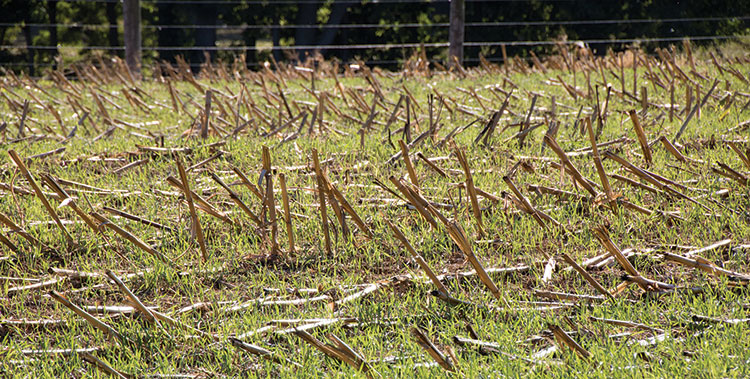 Winter rye, no-tilled into corn silage stubble, is providing high yields of quality forage on many dairy farms.
Amidst the rolling hills of Lancaster County, Pa., you will find everything from state-of-the-art dairies to picturesque, modest-sized Amish and Mennonite farms. It’s a landscape made for postcard sales; it’s also an area where many dairies have jumped on the idea of making winter cereals a mainstay in their crop rotations.

“We like the consistency of yield that cereal rye gives us,” said Mike Brubaker, who farms with brother, Tony, and his father, Luke. The Brubakers seed about 600 acres of rye each year. “The quality of the feed is excellent and it’s a great conservation crop,” Luke added.

“Our biggest cereal forage is rye, and it’s been that way for a lot of years,” said Jeff Graybill, Penn State extension’s agronomy educator in Lancaster County. “Farmers can typically harvest it in the boot stage in late April, apply liquid manure, and no-till corn back into the field before May 10 in most years. That’s about the end of our optimum corn planting window.”

On the Brubaker farm, over 1,000 cows are milked; they grow about 600 acres of corn silage and 150 acres of alfalfa that help fuel the dairy herd. Rye is no-tilled into the corn silage stubble soon after harvest is complete at a seeding rate of about 2.5 bushels (140 pounds) per acre. “We plant about half our acres to an early maturing variety and half to one that matures on the later side,” said Mike, who heads up the field operations. “We try to cut at the boot stage and harvest at about 70 percent moisture.”

The Brubaker dairy herd is fed 70 percent corn silage (dry matter basis) with the remaining 30 percent of forage being evenly split between alfalfa haylage and winter rye silage. The winter cereal is also used to feed heifers, which are raised by the Brubakers but at a different farm than the milking herd. The rye tests over 16 percent protein.

Liquid manure is applied to some of the rye acres before they are planted, while other acres receive manure in March using a dragline. Harvest generally occurs in late April and corn is no-tilled into the rye stubble, usually in early to mid-May.

Arlin Benner also relies heavily on winter rye to feed both his milking herd and young stock. Benner and his wife, Deborah, own and operate Yippee Farms near Mount Joy. “I’m done with alfalfa,” Benner said. “We’re moving to a corn silage-winter rye rotation on all of the acres. I like the tonnage that rye offers.”

The winter rye is no-tilled around mid-September into corn silage stubble at a fairly hefty rate — 4 bushels per acre. Like Brubakers, Benner plants a couple of different varieties to spread his harvest window and capture as much of the forage in the boot stage as possible. “We source our normal rye seed out of Canada but then buy an early variety locally,” Benner said.

Benner applies liquid manure to some fields, while others receive about 30 pounds of nitrogen in the spring. He shoots for a harvest moisture of about 65 percent. In 2016, Yippee Farms hauled off over 3 tons of ryelage dry matter per acre from their fields.

Winter rye isn’t the only winter cereal game in town. “The past few years have seen more experimentation with triticale, wheat, and barley,” Graybill said. “Some have switched to triticale because it is still very early but will not mature as fast from high to poor quality.”

One of those farmers who likes triticale is Aaron Hess. He covets the quality that winter triticale provides but also the fact that it extends the harvest window. Aaron farms with his father, Joe, and operates a 350-cow dairy. “We grow 130 acres of an early-maturing rye and another 150 acres of triticale. The triticale is ready to harvest about two weeks later than the rye,” Hess said. They daily feed 4 pounds of dry matter to the milking herd along with alfalfa and brown midrib corn silage. Heifers are fed ryelage.

The Hesses no-till seed 2.5 bushels per acre of triticale after corn silage. They also include Italian ryegrass and radish in the seeding mix. About 9,000 gallons of liquid manure is applied before planting, and then 50 to 65 pounds of nitrogen fertilizer is broadcasted in the spring.

“We target about 68 percent for a boot-stage harvest moisture and generally get around 3 tons of dry matter per acre,” Hess said. He also noted that in the fall they like to no-till seed about 1.5 bushels of triticale into their alfalfa stands. “It makes for a nice mixture and keeps the first-cut alfalfa from lodging.”

This article appeared in the August/September 2016 issue of Hay & Forage Grower on page 34.

Adjust rations for sorghum silage Next