Hold the water late, not early 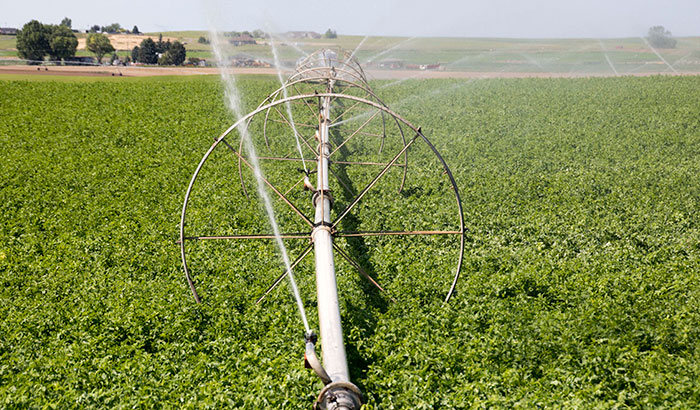 Water shortages in the West have prompted farmers and researchers to explore strategies that will cut water usage while at the same time maintaining profitable alfalfa yields. According to Dan Putnam, University of California-Davis extension forage specialist, deficit irrigation may be an option.

Deficit irrigation can be accomplished using one of several strategies. The first approach is to simply reduce watering over the entire growing season. This is what Putnam refers to as the “starvation diet.” The alternative approach is to provide the alfalfa full water early in the season and then cut off all water at some point during midseason.

Field plots were established in 2014 on a silt-loam soil at Davis, Calif., and treatments were applied in 2015 and 2016 as follows:

3) Full irrigation until early July (50 percent of seasonal ET), then 50 percent sustained deficit irrigation for the rest of the season.

4) Same as 3, but water was totally cutoff in early July for the rest of the season.

Putnam notes that the reason for the low-yield penalty with the deficit treatments is because nearly 75 percent of the total season yield occurred prior to August. Hence, late-season moisture stress coupled with alfalfa’s ability to extract deep moisture for end-of-summer growth minimizes total-season yield reductions.

The results of the experiment to date show that near maximum alfalfa yields can be obtained with a 25 percent reduction in total irrigation water used. Target mid- to late season for those reductions.

A few other considerations highlighted by Putnam:

· Fill the soil profile with water at the beginning of the season; that water is needed to sustain alfalfa growth during the heat of summer.

· Though deficit water strategies are possible with all irrigation types, it may be easier and more effective with subsurface drip irrigation.

· Results may be different on a more coarse-textured soil or under hot, desert conditions.

· The effects of late-season deficit irrigation imposed for several consecutive years on plant survival and persistence is still not known.

· In some cases, full-season irrigation may be needed to leach salt from the soil profile.

A complete summary of the UC-Davis study can be found here.

Breeding for hill-climbing cattle Next