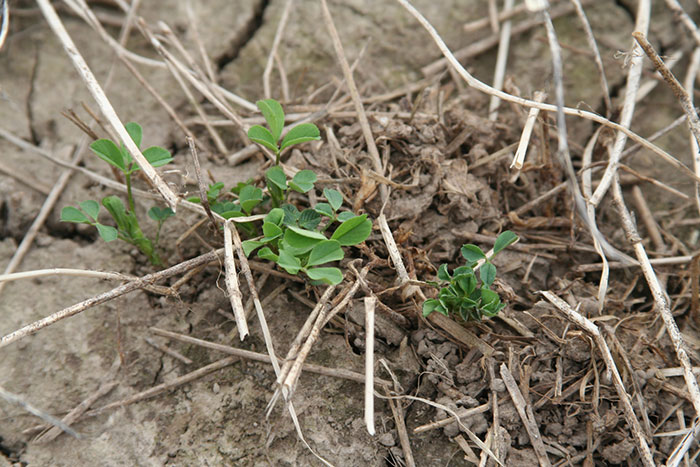 Landing in Milwaukee last Friday after a week in California at the World Ag Expo, I had the usual February expectation of frigid air and perhaps blowing snow. That’s the Upper Midwest norm.

Instead, I was greeted by a 68°F temperature and brilliant sunshine. Across the Midwest it was a similar story, with some locations hitting the 70s and 80s . . . and on it goes through most of this week.

While in California’s Central Valley, I walked some alfalfa fields that were green and growing. Farther south in the Imperial Valley, growers attending the Expo were telling me that hay had already been or was being harvested. That’s typical for this time of year.

By contrast, Midwest alfalfa is often covered by snow or at least adding a tinge of brown to the February landscape. Forget the snow for the time being, fields are still brown, but these kinds of temperatures have lots of folks concerned that alfalfa may begin to break dormancy . . . and that’s generally not a good thing in February.

“The recent long spell of daytime temperatures in the 50s, 60s, and even some 70s probably awakened at least some alfalfa plants from winter dormancy,” said University of Nebraska-Lincoln Extension Forage Specialist Bruce Anderson in UNL’s CropWatch newsletter. “When alfalfa plants break winter dormancy, they use nutrients stored in their roots and crown and start to grow as if spring has arrived.”

Looking back to last fall, crown buds were formed on alfalfa plants that provide the new growth once spring and warm temperatures arrive. If these buds break dormancy and are then killed by a freeze, the plant must form new buds. This expends additional energy reserves and delays spring green up.

Though alfalfa breaks dormancy at some point each spring, having it occur this early predisposes the young, green plant tissue to freezing once normal winter conditions return. That may not be so bad except that if the pattern is repeated two or three more times, plants become severely weakened.

Unfortunately, there are no hard and fast rules that make it easy to predict if alfalfa plants will be injured once the real spring arrives. In addition to air temperatures, soil temperature also plays a role.

“During an untimely winter warm spell, dehardening can threaten alfalfa,” noted Dan Undersander, University of Wisconsin extension forage specialist. He added, “The threat is when air temperatures are more than 60°F and the soil temperature at 2 to 4 inches (deep) is more than 40°F.”

Alfalfa variety fall dormancy rating also comes into play. Although alfalfa breeders have broken the link between fall dormancy (FD) and winter injury ratings, the fact remains that more dormant varieties (FD 2 or 3) will be slower to initiate new growth than less dormant (FD 4 or 5) varieties.

Finally, there is also the factor of fall cutting management. Leaving ample regrowth in the fall tends to moderate temperatures at the soil surface.

Nebraska’s Anderson sums up the situation this way, “It’s impossible to predict if alfalfa will be hurt this winter. Since weather conditions have been risky, be ready to check your fields and make any necessary adjustments early.”

Let’s hope, like many years gone by, all the worrying will be for nothing.

Cogitating on companion crops Next