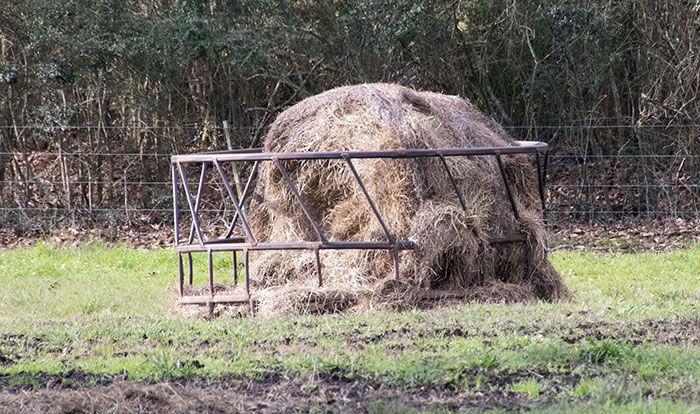 Many parts of the country saw record temperatures in February and little measurable snow throughout the winter.

Despite the unexpected warmth, submissions at the University of Kentucky Vet Diagnostic Lab (UKVDL) and information from veterinarians and producers confirm a significant number of cattle are losing excessive body condition and some are dying of apparent malnutrition.

“This indicates many winter feeding programs this year are not adequate to support cows in late pregnancy, early lactation, or even their newborn calves,” says Michelle Arnold, ruminant extension veterinarian for the UKVDL.

Hay of unknown nutritional quality often does not provide sufficient nutrition to meet the animal’s basic requirements. If cattle are not being supplemented with adequate energy and protein sources, body fat stores will be depleted, followed by breakdown of muscle protein, and finally death as a result of insufficient nutrition.

The first sign of nutritional deficiency is a cow becoming weak in the rear. If this is the case, the cow will eventually go down and become unable to stand, with death following in a day or two.

According to Arnold, at necropsy the animal is found to have no body fat stores but the rumen is full of bulky, dry hay. On the surface of the heart, there is a small but definite seam of fat that is the last storage area for fat in the animal. Once this is gone, there is no fat left in the body.

Despite access to free-choice hay, cattle can starve to death due to lack of energy and protein. Hay may look and smell good, but unless it is tested for nutritional content, the true feed value of the hay is unknown.

Inadequate crude protein, below 7 to 8 percent, means there is not enough nitrogen for the rumen microflora to break down fiber and starch for energy. Digestion slows and the cattle eat less hay because the rumen is full. Cattle are expected to eat about 2.5 percent of their body weight in dry matter, but this may fall to 1.5 percent on poor quality hay.

Additionally, there have been multiple diagnostic submissions associated with “weak calf syndrome” or full term calves presumed to be stillborn.

“Almost without exception, there have been no gross or microscopic lesions or pathogens identified in fetal tissues or placenta indicating why this would happen,” says Arnold.

Maternal nutrition during the last trimester of pregnancy, especially dietary protein levels, plays an important role in calf survivability. Calves born from protein-deficient cows are less capable of generating body heat and are slower to stand and nurse compared to calves whose dams received adequate dietary protein in the last 100 days of pregnancy.

Liver samples analyzed from many cases at the UKDVL have shown that copper and selenium levels are also low. Copper and selenium are vital for proper immune system function. Selenium deficiencies cause delayed conception, cystic ovaries, and retained placentas.

Grass tetany cases received in late February in lactating beef cattle consuming only hay, with no access to fresh grass, suggest 2016 hay supplies may be lacking in magnesium.

Arnold notes that for most cases this year, protein tubs will not be sufficient to fulfill energy requirements. She also suggests offering a trace mineral mix high in magnesium through the first of May to prevent grass tetany.

“The best advice for all producers is to know your forage quality,” Arnold says.

Recovering pastures after a drought Previous