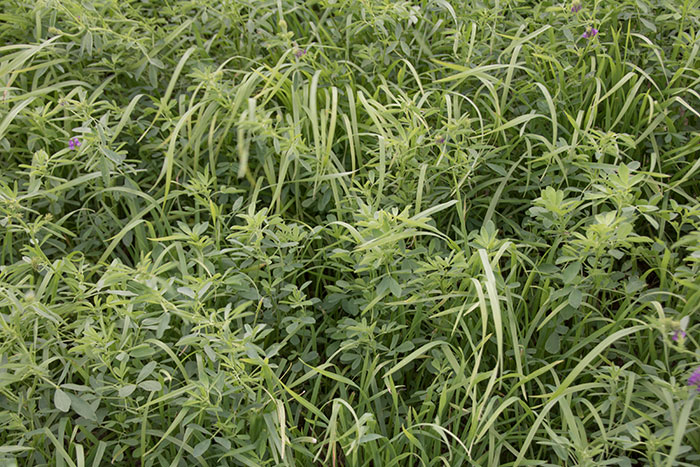 When ordering pizza, I’m partial to mushrooms . . . and only mushrooms.

Don’t try to complicate the issue with the likes of pepperoni, sausage, pineapple, peppers, onions, or any other item on the never-ending list of topping choices. It’s not that I dislike some of these other options; it’s just that I don’t want them contaminating my mushroom preference palate.

Similarly, for most of my life I’ve also been a pure alfalfa disciple. It was easy to take such a stance having lived and worked in an area where the soils were fertile and it was difficult to move the native soil pH off of 7.0. Most farms sat on a mother lode of limestone rock. Alfalfa thrived until intense harvesting and multiple winters took their toll.

Agronomically, there was really no good reason to complicate the issue by bringing grasses into the mix. Of course, that is not true in many regions of the United States.

My biggest beef with alfalfa-grass mixtures was the realization that first cutting could often be delayed by rain. When this occurred, grasses seemingly turned overnight from high-quality forage to cordwood.

My other concern with alfalfa-grass mixtures was the variation in forage quality from year-to-year and cutting-to-cutting. Even with the same seeding rate, the amount of grass that established differed each spring depending on environmental conditions. Further, grasses express themselves differently in the spring than in the summer and fall. All of this resulted in large forage quality variation, which made for an ornery dairy nutritionist.

In both dairy and beef rations, there are good reasons to feed a mixture of alfalfa and grass. For dairy, this has been precipitated by feeding higher corn silage rations.

In the case of beef cattle, wintering cows that consume only alfalfa hay receive more than adequate protein but may be limited by energy. A high-quality alfalfa-grass mix can help to moderate the protein consumption while adding a bit more TDN (total digestible nutrients).

These nutritional benefits can only be realized if the grass is cut before it becomes too mature, at which point there are copious amounts of not so digestible NDF. This has historically been a challenge in alfalfa-grass mixtures, but new grass selections have helped.

Currently, farmers are opting for late-maturing orchardgrass varieties, improved tall fescue options, and meadow fescue. All of these seem to pair with alfalfa better than the old standbys such as timothy, smooth bromegrass, and common orchardgrass.

Alfalfa-grass mixtures offer some unique challenges beyond just the timeliness of cutting. The use of glyphosate for weed control in the establishment and subsequent years is all but eliminated even if Roundup Ready alfalfa varieties are seeded. Further, there is still going to be annual and seasonal forage quality variability attributed to grass expression.

If mixing alfalfa and grass at seeding time isn’t appealing but you’d like to capitalize on the nutritional benefits of high-quality grass forage, there is another option. Dedicate some acres to pure stands of grass that can be stored separately and then mixed into a TMR or fed along with alfalfa hay. This approach offers some ration control benefits and may help minimize forage quality variation.

More and more livestock producers are making alfalfa-grass mixtures work to their advantage, but not without timely cutting. I have to confess that I’ve become more understanding as to why someone might want to contaminate those pure alfalfa stands, and I guess that’s a start. As for pizza, I’m sticking with double mushrooms.

Alfalfa seed must be cleaned to ensure quality Next