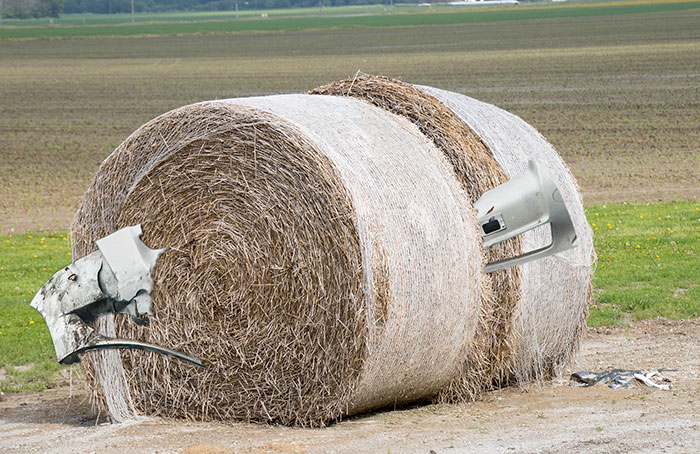 Harvesting hay from the road right-of-way is a common practice in many parts of the United States. While the phrase “It’s better than feeding snowballs” is often associated with road ditch hay, a logical follow-up question might be “Is it?”

Though ditch hay might come at a favorable price point, the road right-of-way is also wrought with peril for both machinery and cow. The rear bumper off an ’86 Chevy offers little feed value and may just be downright traumatic (and expensive) for a mower-conditioner.

The condition of road ditches are as varied as . . . well . . . the condition of roads. Some ditches provide a rather clean stand of cool- or warm-season grasses; others are more suitable as a source of photos for a weed identification manual. Hopefully, it’s not a poisonous weed reference.

During the summer of 2015, North Dakota State University extension agents collected 182 samples of harvested ditch hay from 36 counties across the state to quantify forage quality. They also collected peripheral information about each sample such as the cutting date, type of binding material, how the hay was going to be fed, and to what type of livestock. The results were reported in the 2016 North Dakota Beef Report.

As might be expected, forage quality of the ditch hay samples exhibited a wide range (see table). Getting the hay dry enough to bale didn’t appear to be a problem as the wettest hay was still only 16.3 percent. Most of the hay consisted of cool-season grass species with smooth bromegrass being the most common.

Though the average ash content of the samples was 10.8 percent, some samples contained over one-third of their total dry matter as ash. The ash component essentially consists of soil particles that are harvested along with the hay. The researchers noted that heavy oil field activity on unpaved roads contributed to at least some of the high-ash samples. Ash is an important consideration when contemplating the harvest of road ditch hay, especially along unpaved roads.

Other factors that characterized the ditch hay included:

· Plastic twine (40.6 percent) and net wrap (40 percent) were the most common binding materials. Sisal twine was used to bind the remaining bales.

· Most (90 percent) of the hay was harvested to feed cattle.

· About 25 percent of the samples came from hay that had been rained on during the interval from cutting to baling. Rained-on samples were positively correlated with higher ash content and lower total digestible nutrients (TDN).

Walking the area before cutting may also be a good idea to avoid those pesky used car and truck parts.

Here’s what matters Next