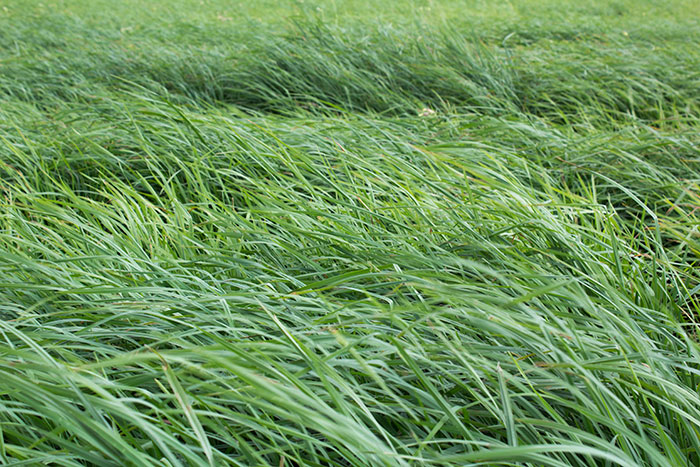 It’s no secret that late summer droughts bring challenges for maintaining pasture productivity and quality. There is hope, however, in the form of warm-season grasses that can more easily withstand the heat.

“Warm-season grasses can produce energy through photosynthesis faster, which allows them to use more of the sunlight that falls on their leaves,” says University of Tennessee Beef and Forage Center’s Gary Bates in comparison to cool-season options.

Native to tropical and subtropical regions, warm-season grasses have deeper roots, allowing for more effective water use and the ability to thrive at temperatures around 90°F, Bates notes.

Of the perennials, Bates suggests bermudagrass and bunchgrasses such as big bluestem, indiangrass, eastern gamagrass, and switchgrass.

Bates says that bermudagrass can be prone to severe stand loss in the mid-South due to winterkill, but its strength lies in the ability to be grazed low and often. If harvested early at four-week intervals, and with adequate soil fertility, hybrid bermudagrass can produce high-quality forage. Seeding methods for bermudagrass may differ depending on type.

“Some varieties can be planted from seed, while hybrids do not produce viable seed and have to be planted by live, vegetative material from another stand,” Bates says. This process is often referred to as “sprigging.”

Establishing perennial warm-season bunchgrasses is becoming a popular option on a number of grazing operations; however, they offer more establishment challenges than cool-season grasses and demand a high level of grazing management to ensure stand persistence. Bates suggests not grazing below 8 inches, especially during late summer.

Another option to fill the “summer slump” period is seeding annual grasses such as crabgrass, teffgrass, pearl millet, and sorghum x sudangrass hybrids.

“Because it is an annual, allowing plants to produce seeds for the next year’s stand is necessary,” Bates says.

Other alternative annuals include pearl millet and sorghum x sudangrass hybrids. Both are tall and productive, but Bates warns of potential challenges.

“Sorghum x sudangrass hybrids release prussic acid (cyanide) after a frost, so you cannot graze them as long as pearl millet,” he says, adding that after a frost it should only be cut for hay, which allows the acid to break down.

Teffgrass offers yet another alternative. This annual grass has fine leaves and stems that make it an excellent choice as a hay crop. Bates notes that the seed is very small and should not be placed more than 1/8-inch deep at planting.

Planting warm-season grasses provide an excellent forage option in times of drought when species such as tall fescue go dormant. That being said, Bates encourages producers to be reasonable in their approach as these warm-season species come with more risk and a shorter growing season.

“A good rule of thumb is to have 70 percent of your acreage in cool-season grasses like tall fescue,” Bates says. “Thirty percent can be sown to a warm-season grass.”

He concludes, “Although they do not eliminate all of the problems associated with drought, they will help minimize some of the forage production problems we may face in the future."

Lauren Peterson
Lauren Peterson is serving as the 2017 Hay & Forage Grower summer editorial intern. She is from Wyanet, Ill., and currently attends Kansas State University where she is pursuing a degree in agricultural communications and journalism. While at school, Lauren works at the KSU dairy farm and is an active member of the Horseman’s Association.

Target control of grassland weeds Next

An easy mistake to make Previous