Cut (and ensile) your losses 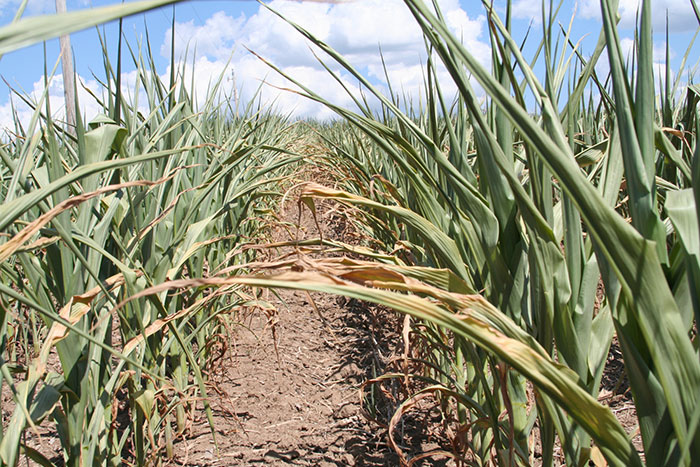 When life gives you drought, make corn silage from your stressed grain crop. As dry conditions wear on in the Upper Plains, some producers are considering salvaging their corn cash crop as feed.

“In some instances, the likelihood of corn making a harvestable grain crop is so low that the best option is to take an early forage harvest,” says Warren Rusche, South Dakota State University (SDSU) extension beef feedlot management associate.

The first issue to consider is nitrate accumulation. Rusche advises testing prior to harvest to avoid the risk of abortions and/or death loss. In addition, raising the cutting height lowers the risk of poisoning as the greatest concentration will be found lower in the stalk.

“Cutting drought-damaged corn for silage is hands down the best harvest option,” Rusche shares. “The feeding value even of short, barren stalks is relatively high as silage, as much as 70 to 80 percent of normal corn silage.”

If cut for silage, moisture content is not as much of an issue, and the ensiling process can help reduce nitrate concentrations. For severely drought-stressed corn, windrowing and using a pickup head for chopping might be necessary if the corn isn’t tall enough to harvest conventionally.

Regardless of crop quality, harvesting correctly is key to ensure maximum silage value. Rusche stresses that harvesting at the right moisture, using inoculants, achieving the correct density, and excluding oxygen are vital for good fermentation and the reduction of nitrate concentrations.

Harvesting corn as dry hay in large bales is not advised. Rusche cites a SDSU trial conducted during the 2012 drought that showed the main problem was getting the corn dry enough to bale. If not completely dry, stalk spoilage is likely. However, allowing time for additional curing creates the risk of further leaf and husk loss.

“Even damaged standing corn can be much wetter than it looks and thick stems take a long time to dry down,” Rusche notes. “In the 2012 trial, the moisture content of the corn plants at the time of cutting was 68.2 percent. After field curing for 30 days, the crop dried down to 16.2 percent.”

The 2012 trial also found that baling corn at a higher moisture content with bale wrap was moderately successful. The baleage had 6.4 percent crude protein compared to 8.6 percent when cut. This scenario was not ideal due to the cost of wrap, disposal of plastic, and that the resulting bales were exceptionally heavy and difficult to move.