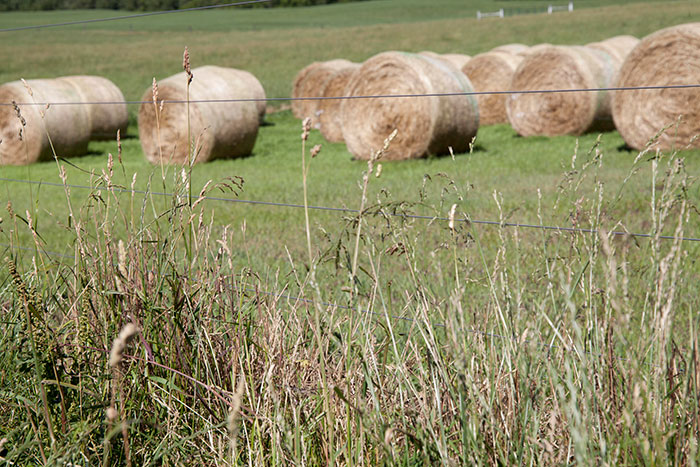 There’s no question that soil health is key to the sustainability of a grazing operation. What is in question, however, is the actual effect of winter bale grazing on soil health. Simply put, many enthusiasts praise this method for adding nutrients immediately back into the soil through hay litter and manure, making the cost of hay seemingly irrelevant. However, no data has supported the claims that the benefits to soil outweigh the cost of hay at almost any price.

John Mesko, executive director of MOSES (Midwest Organic and Sustainable Education Service), has created his own study in an effort to assess the value of hay litter after winter bale grazing at his own farm in central Minnesota. With his grass-fed herd, Mesko knows that the cost of winter feed is often the largest expense for most producers.

“The need to make that feed on the farm often limits the size of the grazing herd. If hay could be affordably outsourced, grass-fed herds could grow larger as most or all of the farm’s land could be grazed,” Mesko says in the Organic Broadcaster newsletter.

Mesko’s on-farm research project, set out to evaluate the productivity of the soil post-bale grazing and thus determine the true value of purchased hay. At the time, with his own cattle numbers on the rise, he was pushing the limits of the farm’s pasture carrying capability.

The results of the study’s first year have been encouraging.

The only real miscalculation that occurred in this study was the distance separating the bales in the first year. With the bales set too far apart, the litter had not been spread evenly, causing spotty regrowth. Bales were moved closer the following winter, averaging 8 feet between bales with more bales being fed at each feeding.

“This had the effect of scattering more hay faster, as the cattle went from bale to bale, looking for the best hay to devour first,” Mesko explains. He also added that they had put out up to three weeks’ worth of feed at one time with little wastage.

Buying hay for winter feeding right out of the field is recommended as it is often much cheaper. In addition, Mesko advises moving bales directly to the winter grazing site and prepositioning the bales, noting that moving bales as little times as possible is key.

“In addition to costing time and fuel, each time a bale is moved, its quality degrades,” Mesko explains. “Lifting the bale loosens the strings or wrapping, opening the bale up to taking on more moisture and increasing the likelihood that it may fall apart during subsequent moves.”

The use of bale rings on large bales defeats the purpose of winter grazing, as the cattle should be allowed to spread and then pick through the litter.

Mesko states that strings and wrappings should be left on the bales to keep them in shape and allow for future moving. Remove wrappings just ahead of bale grazing season to prevent ice from making the task more of a challenge.

Hauling hay for the Dakota drought Next

Cut (and ensile) your losses Previous