The author is an assistant professor and forage breeder with the University of Georgia, Athens, Ga. 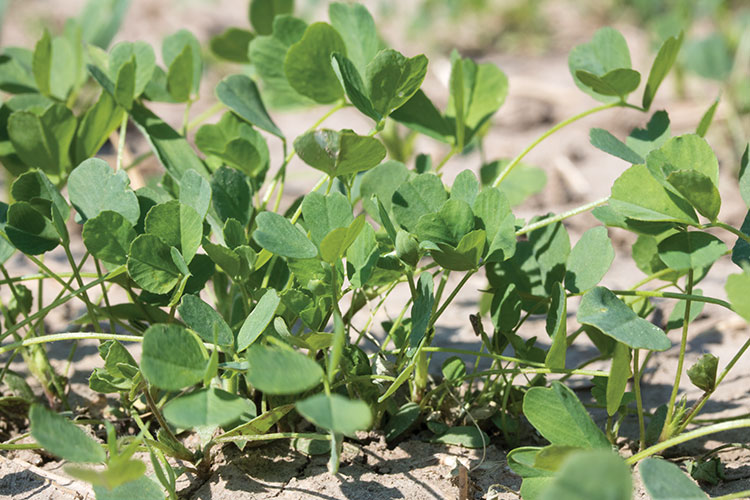 The southeastern United States offers the biggest opportunity for expanding alfalfa acreage nationally, whether as a pure crop or as a companion in bermudagrass pastures and hayfields. Alfalfa offers producers a significant profit potential through selling hay, or by grazing or conserving the surplus as haylage.

A growing number of bermudagrass producers across the Southeast have started incorporating alfalfa into suppressed or closely clipped bermudagrass pastures. They harvest nearly pure alfalfa early in spring and later in fall, and during midsummer, when bermudagrass is actively growing, they harvest a near 50 percent grass-legume mixture. Most of these growers were attracted to alfalfa because they have seen enormous improvement in the quality of their hay (190 relative forage quality [RFQ] for an alfalfa-bemudagrass mixture versus 90 RFQ for bermudagrass hay), and they were able to save on the application of nitrogen fertilizer.

Development of grazing-tolerant varieties adapted to the Southeast was another factor raising interest in growing alfalfa on the Coastal Plains. Studies evaluating the sustainability of production of alfalfa interseeded in bermudagrass showed that alfalfa competes well with bermudagrass, even in drought conditions.

The major challenges to alfalfa production in the Southeast are low pH soils and aluminum (Al) toxicity. The most prevailing soils in the region are the highly weathered Ultisols, spreading across the entire region. These soils tend to have low pH and are, therefore, poorly suited to alfalfa production without lime and fertilizer amendments. One of our breeding goals is to develop varieties that will tolerate low pH soils and reduce the likelihood for Al toxicity.

Low soil pH reduces the availability of macro- and micronutrients, reduces beneficial microbial activity in the rhizosphere, and enhances the solubility of phytotoxic metals such as Al, manganese (Mn), and iron (Fe). Plants readily absorb soluble Al, which in high amounts will inhibit root growth and development, making the root system inefficient for water and nutrient uptake.

Alfalfa requires a soil pH between 6.5 and 7.5 for optimal production. Productivity and persistence of alfalfa is affected by Al toxicity in acid soils because of the reduction in root growth and inhibition of nitrogen fixation. Optimum growth and production of alfalfa on the acid soils of the Southeast is contingent on the addition of lime.

Lime corrects soil acidity, supplying calcium and possibly magnesium, depending upon the liming material used. Current recommendations involve the application of lime six to 12 months prior to seeding with thorough incorporation. With no-till planting, surface applications should be made one to two years before planting to allow for the movement of lime into the soil profile. Research has shown that alfalfa yield during the seeding year is greater with incorporated than with surface-applied lime, but in succeeding years annual yields were not different between liming methods. Evaluations on the effect of liming on alfalfa production showed that without applied lime on low pH soils, most alfalfa died within two years of planting.

The addition of lime raises the establishment costs and also does not reduce soil acidity in the subsoil, which can substantially lower alfalfa yields. Alfalfa has the potential to develop a deep root system in unrestricted soils, which benefits the plant in times of drought. But the deep roots will eventually encounter acid soil zones even when the upper soil layers are correctly limed. Therefore, the most effective option to improve alfalfa production is the development of varieties with improved tolerance to Al in acid soils. 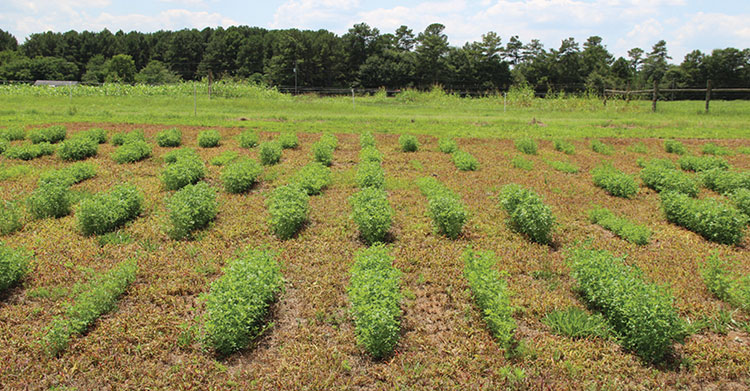 Alfalfa accessions are first screened for performance in a low pH soil with a high aluminum content. Selections are then transferred to more normal growing conditions where they are assessed for forage yield, fall dormancy, and persistence compared to commercially grown check varieties.

Improving alfalfa cultivars for tolerance to low pH soils and aluminum toxicity would have a great impact on the sustainability of livestock operations in the Southeast. The high rainfall and mild winters in these environments would allow growing nondormant alfalfa year-round. Based on the bermudagrass acreage in the region, there is a potential of over 20 million acres for the production of alfalfa across the Southeast.

Despite the efforts made over the past decades in studying the mechanisms and genetic factors underlying low pH and Al stress in alfalfa, nothing has translated into varieties with acceptable yield under field conditions. The lack of progress is most likely due to the limitations of the procedures used to identify germplasms with tolerance to Al and low pH. Previously, attempts to evaluate Al tolerance in alfalfa were based on greenhouse or lab conditions rather than field conditions and real production environments.

Most of the past tests focused on one aspect of the plant, root length, which may not necessarily translate in high yield and persistence. Even though Al toxicity occurs in acid soils, the genetic factors underlying tolerance to each of these stress conditions may not be the same.

Yield and persistence under low pH are much more complex than just root length. The remarkable physiological and biochemical changes the plant undergoes when under Al stress implies that a large array of genes are involved in Al toxicity tolerance. Therefore, a more comprehensive and holistic approach needs to be done under field growing conditions to identify and improve alfalfa germplasm tolerant for low pH and toxic levels of Al in the soil.

Taking it to the field

Because of the limited success of greenhouse and lab screening approaches in identifying alfalfa germplasm with acceptable biomass yield under field conditions, we shifted our focus in the forage breeding program at the University of Georgia (UGA) to direct field evaluation and selection in low pH and high Al soils. We evaluated 1,570 alfalfa accessions from the U.S. National Plant Germplasm System (NPGS) collection, originating mostly from world regions known for their low pH soils.

The accessions were planted at Tifton, Ga., in a Tifton loamy sand soil with a pH of 4.7 and aluminum content of 297 pounds per acre. The average annual rainfall in the region is 53 inches. The seed was directly planted in 5-foot rows and the accessions were evaluated for three years. In spring 2016, the most vigorous of the surviving plants were dug and transplanted at the UGA J. Phil Campbell Research and Education Center near Watkinsville in a normal pH soil.

A total of 1,260 plants tracing back to 112 origins were selected based on plant vigor and plant architecture. They were evaluated for yield against the common check varieties grown in the region. The top 116 entries that were equal or better than the checks in biomass (100 to 137 percent of yield) were selected for crossing in bee cages.

Replicated half-sib progeny evaluation was then done at the UGA Iron Horse Plant Sciences Farm (Watkinsville, Ga.) in a soil with a pH of 4.6 and Al content of 152 parts per million (ppm). Recurrent selection for yield and persistence under grazing will be imposed on this germplasm to develop and release elite cultivars adapted to low pH and high Al environments.

Even though this work is still ongoing, the preliminary performance of the selected genotypes points out clearly that it is possible to make progress in selection for low pH tolerance under field conditions. It is our ultimate goal to make low soil pH tolerant alfalfa varieties a reality for growers in the future.

This article appeared in the November 2017 issue of Hay & Forage Grower on pages 6 and 7.

Finding an alfalfa dance partner Next