Leaves: The key to quality forage 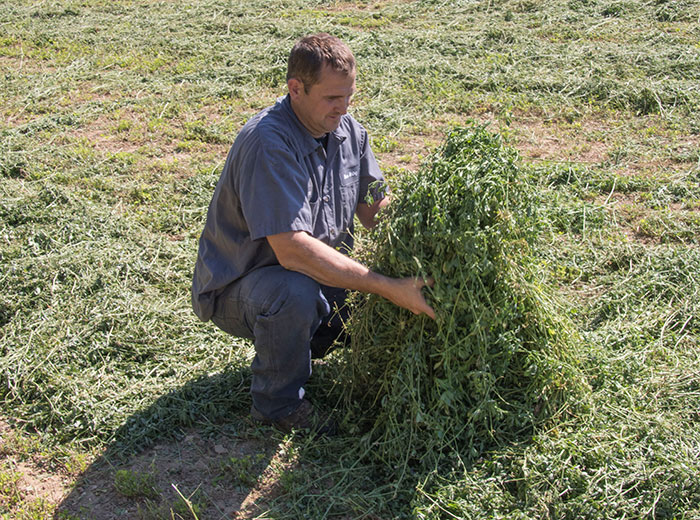 The recently retired University of Wisconsin extension forage specialist emphasized that the bulk of the nutritional benefit of forages is in the leaves.

“The first place we must start in preserving forage quality is to get that wilting crop below 60 percent moisture as quickly as possible,” Undersander said. “That crop continues to respire and burn nonstructural carbohydrates above 60 percent moisture. It’s an invisible leaf loss; we don’t see anything on the ground, but our forage quality is being driven off into the air as carbon dioxide,” he explained.

Research shows a 60 percent correlation between nonstructural carbohydrates in the forage and relative forage quality (RFQ), so the more starch and sugars that are kept, the higher the potential RFQ.

Forage quality reductions are only part of the leaf-loss story. Undersander noted that the impact on yield is also significant. Going through a couple of examples from previous field trials, he calculated yield loss from lost leaves at 15 to 18 percent. “I couldn’t believe it,” Undersander said, though he did note that keeping yield loss to 5 to 10 percent is an attainable goal.

Losing leaves can sometimes begin before harvest if leaf diseases are a problem. “Before cutting or immediately after cutting, look for dead, dried leaves on the ground,” Undersander said. “These are leaves that probably died from disease pressure. If there are a lot of leaves on the ground, this was probably a situation where a foliar fungicide might have been beneficial,” he explained.

Undersander warned against using flail conditioners for alfalfa. “These work good for grasses but strip the leaves off alfalfa,” he said. His preference is for either rubber or steel roller conditioners that are properly adjusted.

“One of my missionary efforts is to stop producers from tedding alfalfa,” Undersander stated. “Tedding is a wonderful tool for grass crops because we don’t have the leaf loss, but that’s not the case for alfalfa.”

Undersander suggests mowing alfalfa in wide swaths and moving those swaths with a rotary rake or merger. He noted that wheel rakes are less expensive but also contribute to additional leaf loss and move more dirt into the windrow.

“It’s the top of the windrow that usually gets extremely dry and it’s this material that is most subject to leaf loss,” Undersander said. “We can’t do much about this, but may be able to let that forage take on moisture over night if it gets too dry and there’s no rain in the forecast. In the West, commercial growers are now using steamers to put moisture back into the hay,” he noted.

Small square and round balers have the highest likelihood for leaf loss, according to the forage specialist. In the case of the round baler, many producers have moved to baleage. This shift in approach has shortened the drying time while also allowing for greater leaf retention at higher moisture contents.

“One of the great things about baleage is that you can wrap bales from 30 to 65 percent moisture,” Undersander said. “Above 50 percent moisture, you’re going to exclude oxygen and also get fermentation. At lower moistures, the hay is preserved simply by oxygen exclusion,” he added.

“Everyone makes hay a little differently and not all recommendations to prevent leaf loss will apply to every farm,” Undersander said. “But regardless of how you make hay, there are always opportunities for getting more leaves into the bale or silo. Find and implement those things that will retain more leaves and improve that end product,” he concluded.