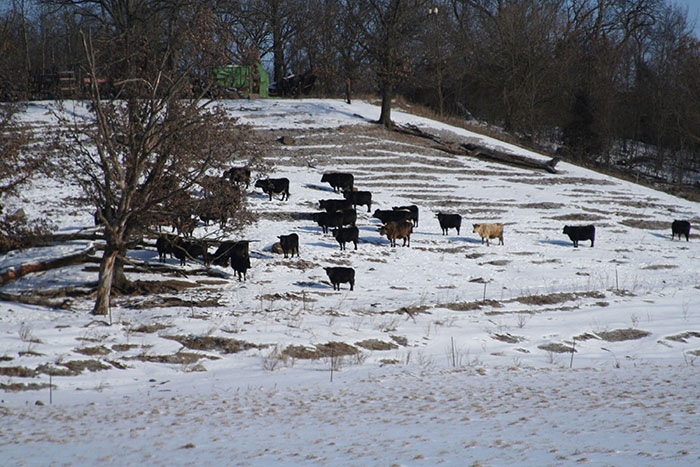 Bale grazing has become a popular means of overwintering a beef cow herd. If the bales being fed are low-quality grass, it’s often the case that early to midgestation beef cows will need to be supplemented to maintain body condition score (BCS).

A North Dakota State University research study was initiated during the winter of 2016 to 2017 that evaluated different feed supplements being fed with the low-quality, bale-grazed grass. The results were presented in the 2017 North Dakota Beef Report.

The beef cows bale-grazed November 4, 2016, to January 12, 2017, at the Central Grasslands Research Extension Center near Streeter, N.D. Several severe snow events occurred during the trial period. The cows were measured for body weight, gain, and BCS.

The poor-quality grass hay offered to the cows provided only 97, 95, and 60 percent of the energy, protein, and phosphorus, respectively, required by cows in early to midgestation. The cows only given the low-quality grass hay lost 0.74 pound per day and BCS dropped from 5.6 to 5.4 (see table).

The cows supplemented with DDGS maintained body weight and BCS throughout the feeding period. They gained 0.58 pound per day. The alfalfa hay and liquid supplement did not influence final body weight or BCS relative to the control.

The researchers plan to repeat the feeding trial during the current winter (2017 through 2018). A full summary of the first-year results is available here.