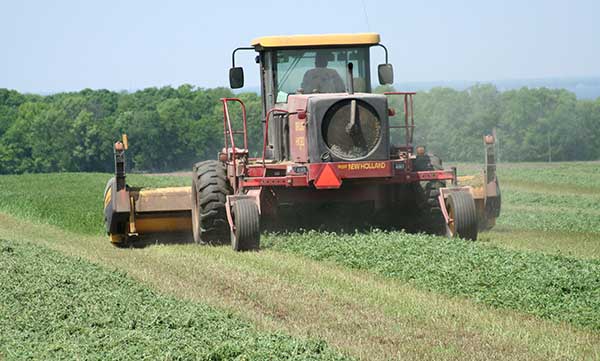 The dog days of August are upon us, and soon it will be back to school, Labor Day and time for that annual furnace checkup (at least for those of us in the North). For many, it’s also the time of year when decisions need to be made about cutting alfalfa for the final time or times. Up until mid-August, it’s usually a balancing act between yield and quality, or at least that is what drives the decision along with weather conditions. Now, persistence and the risk of winter injury enter the equation.

For many years the time period of September 1 to October 15, or some similar facsimile depending where you hang your hat, was designated the “critical fall no-cut period” for alfalfa. There were plenty of spring green-up pictures from research plots and farm fields showing the devastating effects of cutting during this time frame. No numerical data was needed to convince most farmers and agronomists of this management taboo.

Through the years, more science and improved genetics has been added to the fall harvest decision-making process. Dan Undersander, University of Wisconsin Extension forage agronomist, reminds growers that cutting alfalfa such that there is enough regrowth time for replenishment of root carbohydrates and proteins, or cutting late in the fall after regrowth potential is low, are still valid considerations. However, Undersander points to research from Quebec that showed it’s much less about dates than it is about weather following harvest.

The Canadian research indicated that alfalfa needs 500 accumulated growing degree units (base 41) between cutting and the first 24°F killing frost to regrow sufficiently for good winter survival; enough time for root reserves to rebuild. By contrast, waiting to cut when there was little chance of regrowth (something less than 200 growing degree units after harvest) also improved the probability of winter survival. Given that most of us don’t know for sure what weather conditions might follow harvest, it then becomes a probability numbers game based on historical weather records.

Unfortunately, or perhaps fortunately, there's more to contemplate as late summer and fall harvests are considered. We also know that the intensity of previous harvest management is a part of the equation. Stands that are cut early and often during the summer will benefit more from a long fall growth period than those that have been managed more conservatively (35 or more days between cuttings). Stressed stands, weakened from insect pressure, too much or not enough moisture, are also more at risk from inappropriately timed fall harvests.

On the positive side of the fall harvest management decision is the simple fact that improved alfalfa varieties are much better today than they were 25 years ago; back then, fall cutting was a certain death wish. Since the early 1990s, varieties have been tested, screened and selected based on their ability to withstand intensive cutting regimes and are cut at all the wrong times. Simply put, assuming you select top genetics, at least some of the risk factor from fall cutting has been taken away.

The late fall cut after a low potential for any regrowth is unique from several angles. First, most times it is the equivalent of rocket fuel — extremely high quality, and perhaps too good as a sole forage source. Second, that late fall cut always looks like it will yield more than it actually does. Though height might dictate a worthwhile harvest endeavor, the stems are small and there are fewer of them. Most times the windrow size will be a disappointment and the harvest cost of the forage on a per ton basis will be high. Third, remember there is always value in having residue on the field over winter to moderate soil temperatures and hold snow cover. Finally, though the late fall-cut stand may not kill over winter, research shows that it will green up slower the next spring and the subsequent first-cut yield will be reduced.

One certitude that time has taught us is Mother Nature can always trump management. Sometimes, regardless of when or if cut, weather conditions such as severe ice sheeting or extreme temperature variations will kill, heave or severely damage stands. Unfortunately, this outcome always remains a possibility.

With the numerous alfalfa cutting management factors to be considered this time of year, perhaps the most important is simply the need for feed. If forage inventories are north of adequate, why take the chance to cut alfalfa when insufficient regrowth time will exist or when it's late enough that no regrowth will occur? Conversely, if there's a need for additional forage and feed replacement prices are high, the gamble often is justified.

A government program that actually worked Next